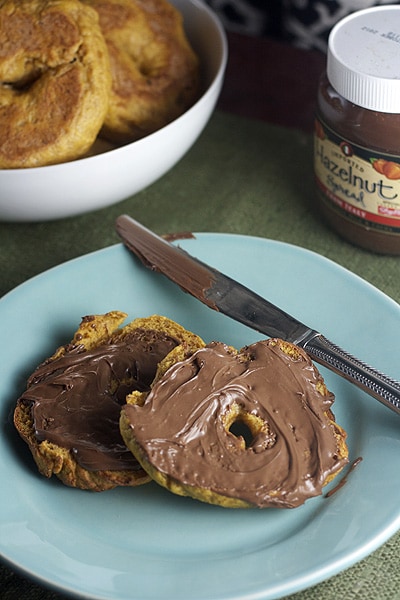 Last weekend, a few friends and I went out to Ithaca to visit with Julie. I hadn’t been to Ithaca in years, and it was so nice to go back and spend the day there. We went to lunch, visited the annual library sale (where I bought a few fun new cookbooks for a song), walked around the commons, and ate cheese fondue.

It was pretty much a perfect day except that I didn’t get a pumpkin bagel. We had gone to the Ithaca Bakery for lunch and although my pear and blue cheese sandwich with thyme-infused balsamic was amazing, I was jealous of Julie’s toasted pumpkin bagel slathered with Nutella. We went back a little later to get drinks for our walk back to Julie’s (their Fall chai, which involves apple cider, still haunts me) and I attempted to buy a few bagels to bring home, but they, unfortunately, had none left. It didn’t take me very long to decide that I’d just have to make my own, the very next day. 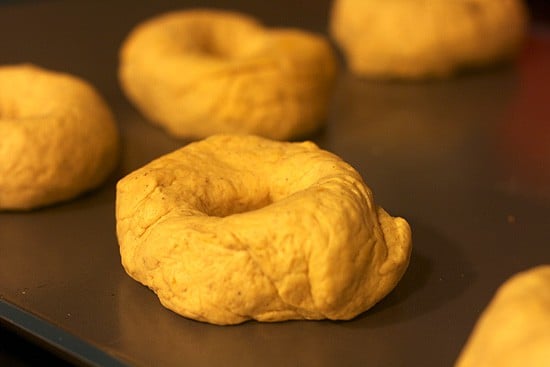 Luckily I’ve made bagels before so I had a general idea of what I was getting into with this project. Bagels are surprisingly easy to make, but they do take a while to rise so you’ll need to make them on a day where you don’t have much planned. They’re the perfect project for a lazy Sunday!

Since I love my original bagel recipe, I used that as a jumping off point for these. The only substantial difference that I really made was to replace most of the water with pumpkin puree. Even though it was a pretty simple swap, the effect that they had on the final product was pretty dramatic. In addition to having the subtle pumpkin flavor that I was hoping for, the puree improved the texture of the bagels as well. Their soft, fluffy interior made them some of the lightest bagels I’ve ever eaten, but with a perfectly chewy crust. I couldn’t have asked for more.