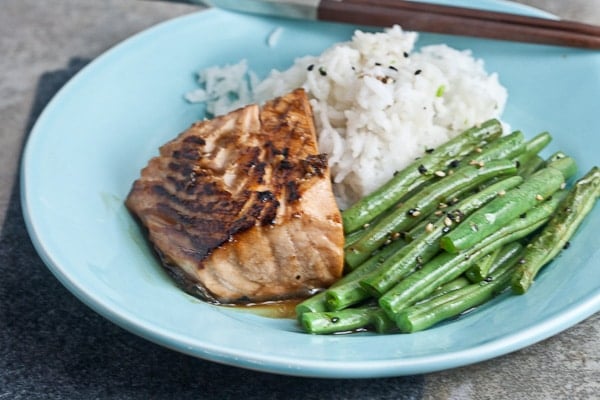 I saw this salmon teriyaki over on The Kitchn a few weeks ago and immediately ran to the store to get the ingredients to make it. I’m so glad that I did, because now not only do I have a new go-to weeknight recipe, I have a fail-proof new way to cook fish! I feel like this photo doesn’t do the recipe justice at all; the salmon is incredibly succulent and falls apart into big, tender flakes with a gentle tap with your fork. Served over rice it doesn’t look like much, but we’re still talking about it weeks later and I can’t wait to make it again.

Rather than cooking this salmon on the stovetop or roasting it, you cook it very quickly under the broiler – it literally only takes 2 minutes! The marinade is just as simple to whisk together – don’t bother with store-bought teriyaki sauce, which often contains corn syrup and can be cloyingly sweet. To prepare a complete meal, let the fish hang out in the marinade while you boil water for the rice. Then, while the rice rests, quickly blanche some green beans and sautee them with a teaspoon of sesame oil and, if you have them, some black and white sesame seeds. Throw the salmon under the broiler while you plate the rice and green beans and you’ll be good to go!

It couldn’t be easier. I’m excited to try preparing salmon this way with other seasonings. Next time, I think I’ll use a miso glaze like this one, but I’m also tempted to try a mustard based sauce.