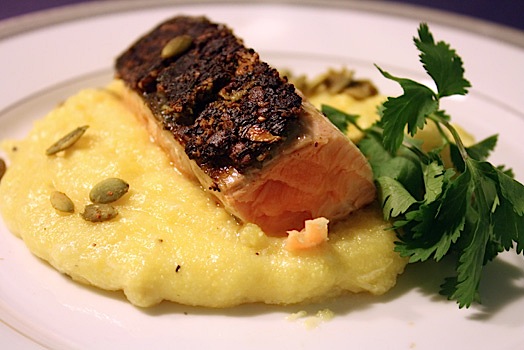 Back to real life… but that doesn’t mean back to boring food! This salmon and polenta could easily pass for a dish at a fancy restaurant, but it can be on your kitchen table in no time at all!

I’m already starting to get tired of pumpkin and other squash so I thought that I should lay off it for a little bit – at least in the forms that I’ve been eating. I decided that I wanted to try something with pumpkin seeds – pepitas – and thought that a pesto would be nice. I encrusted some salmon filets in a mixture of sun dried tomatoes, spicy pepitas, and cilantro and then cooked it until it was crispy on the outside and coked to about medium inside. The rich and spicy flavor of the salmon paired perfectly with a soft, creamy polenta. The completed dish had a Mexican/ South American feel to it, while still seeming very upscale. 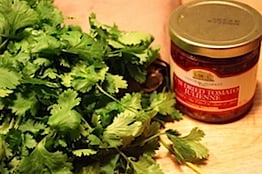 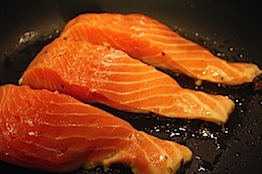 The pepitas that I used were pre-seasoned and came from the bulk bin at the co-op. Id you can’t find pre-seasoned spicy pepitas, you can toss some regular ones with 1 Tbs of chili powder and cayenne to taste.

I typically cook with dry-packed sun dried tomatoes, but for some reason I was having trouble finding them this time around. I ended up using ones that were packed in oil – I think it actually worked out better because the tomatoes pureed into a paste very easily and I didn’t have to add any additional oil. If you want to use the dried kind, rehydrate them in boiling water for several minutes before adding them to the food processor. You may need to add some olive oil to get the ingredients to come together. 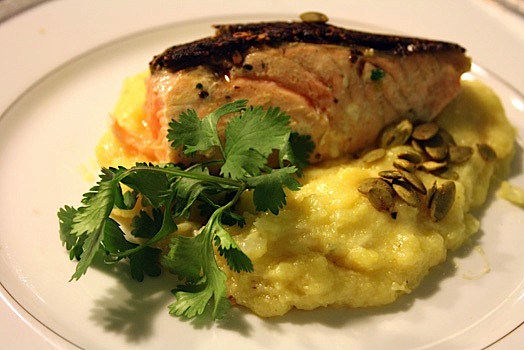 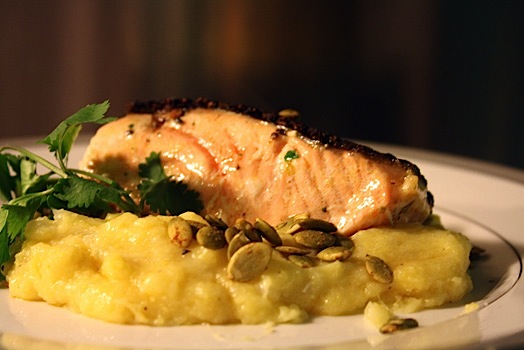 Melt the butter in a large saucepan. Add the onion and cook until it is softened. Meanwhile, bring 5 cups of water to a boil. Add boiling water and bay leaf to the softened onions. Whisk in cornmeal. Lower the heat and allow the mixture to bubble and thicken. Stir constantly, until the mixture is smooth and not gritty (this might take up to 30 minutes). Remove from heat and stir in the cheese.

Meanwhile, pat the salmon dry and let it rest while you prepare the pesto. In a small food processor or mini-chop, combine the sun dried tomatoes, cilantro, and 2 Tbs pepitas. Process until a thick paste is formed. Spread the paste in a thick layer over the skin of the salmon.

Spoon the polenta onto 4 plates. Top with salmon and garnish with a sprinkling of the remaining pepitas and some cilantro.