Pecan crusted catfish nuggets come out extra crispy when you use your air fryer! Serve them with Greek yogurt remoulade for an easy and delicious dinner that’s perfect for Lent. 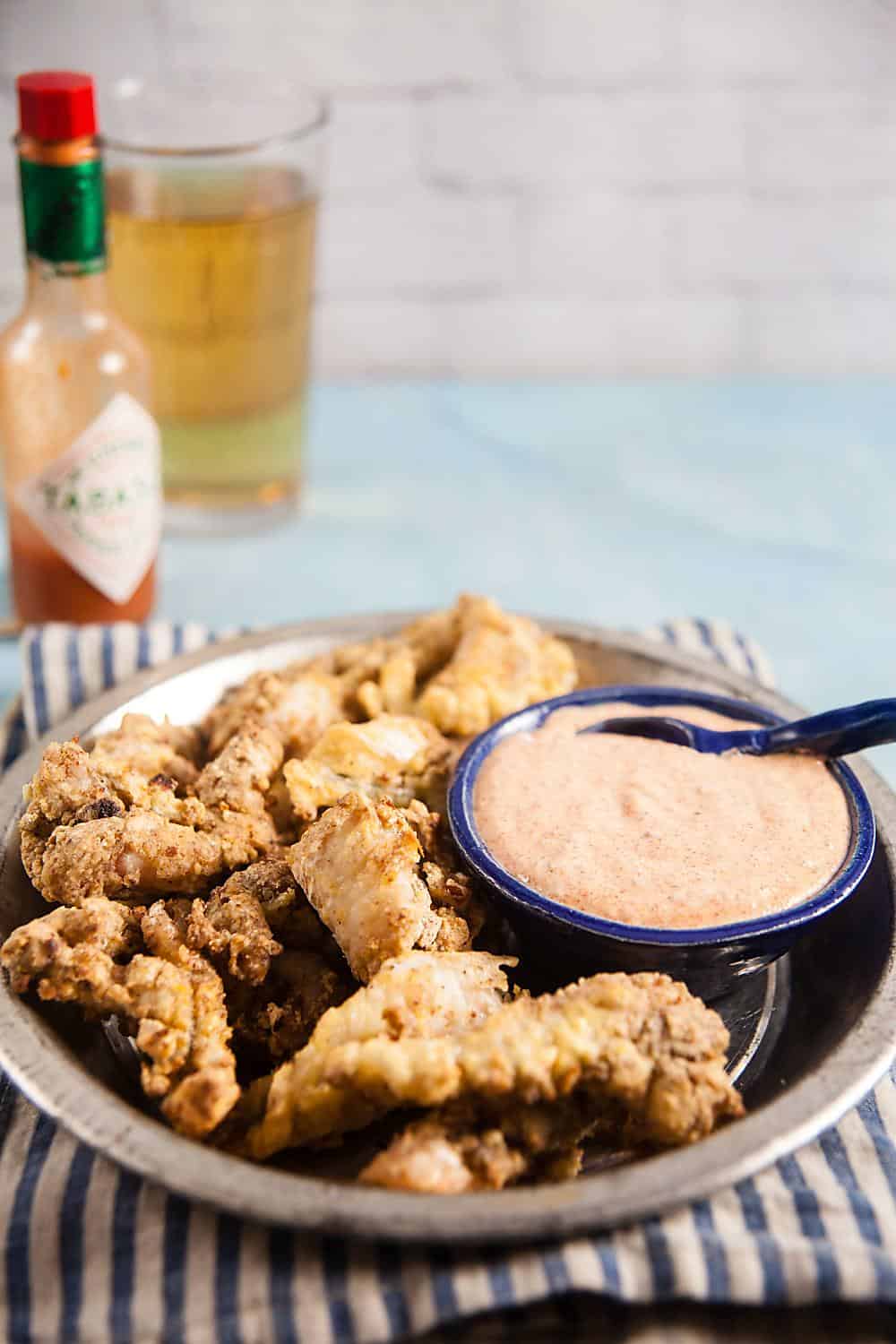 So, I bought an air  fryer. I have to admit that I felt a little silly doing it because I’m woefully short on counter space. Plus I’m pretty good at making “fried” food like “Fried” Pickles and Baked Sesame Chicken Wings in my oven. But I wanted to see what the fuss was all about and I found a good deal on a fryer that was recommended by a trusted friend, so I went for it.

So far, I have mixed feelings. Sweet potatoes fries came out good, but no better than I can make in the oven. On the plus side, I didn’t have to wait for my oven to preheat which was really nice and saved a ton of time. On the negative side, I could only cook about a half of a sweet potato at a time. That meant hanging out in the kitchen to make multiple batches. Plus there’s that whole counter space issue.

That said, when it comes to making recipes like these “fried” catfish nuggets, I was blown away. The fish inside was flaky and juicy while the coating was crispy, crunchy, and practically indistinguishable from deep fried fish. All without the gross smell that comes along with deep frying food at home, or the calories that come along with it. The batch I made in the oven came out OK, but the batch from the air fryer was phenomenal. For recipes like this one, the air fryer appears to be well worth the money. 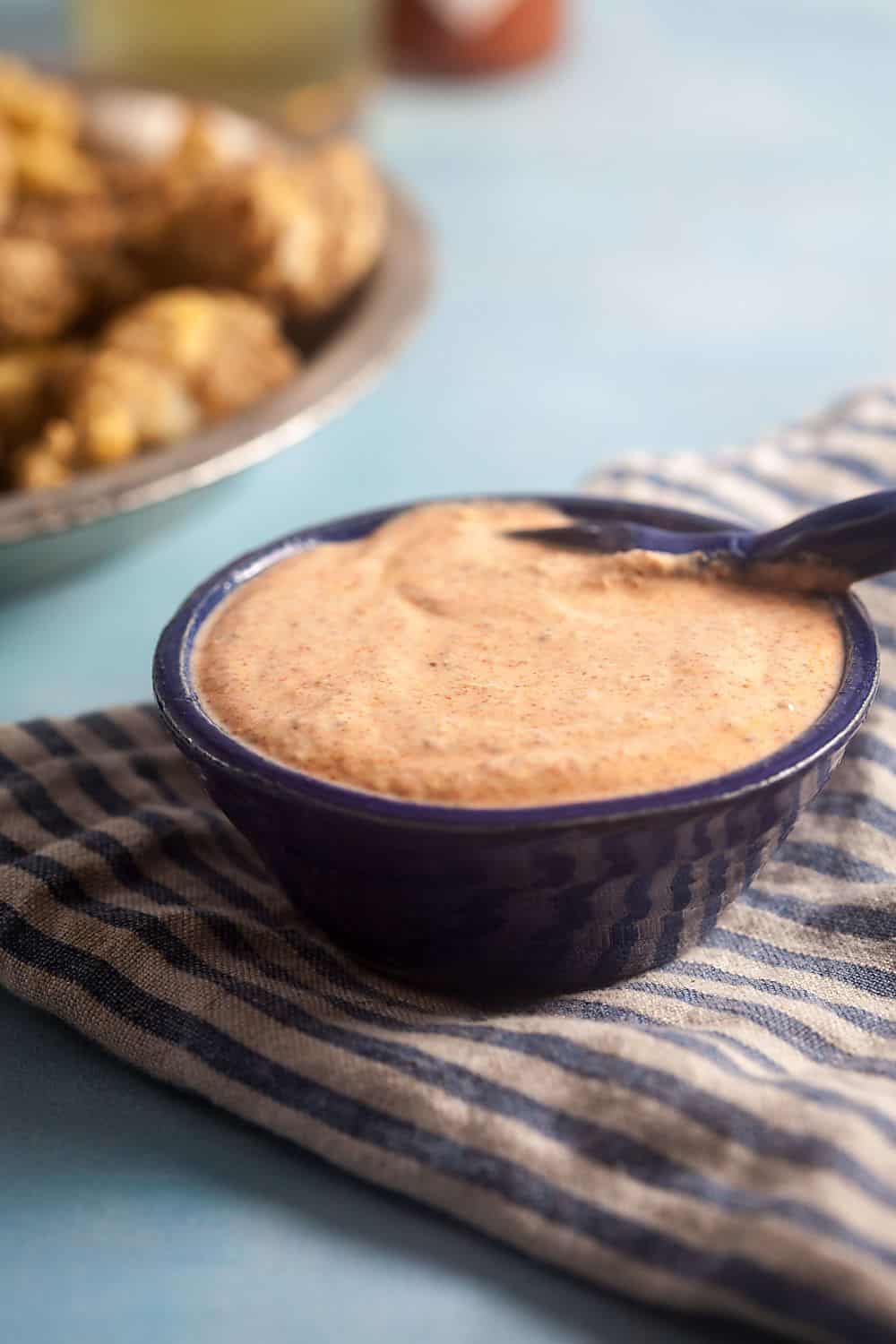 I fell in love with catfish when I went to New Orleans and had it again recently at a new Southern themed restaurant that opened around the corner from my house. Next to salmon and tuna, it might be my favorite fish these days.

The one thing about catfish is that it can have a slightly muddy/bitter flavor if you don’t prepare it correctly. Most fish from the store should be good to go, but a quick soak in salt water will go a long way toward drawing out any lingering bitterness.

You can’t have nuggets without something to dip them in, so I made a quick Greek yogurt remoulade. Remoulade is a classic sauce that’s similar to a cross between tartar sauce and cocktail sauce. It’s usually made with a mayonnaise base, but I strongly prefer it made with plain Greek yogurt instead. (We all know how I feel about mayo.)

Once the fish has soaked, I dipped each piece in egg and a few dashes of Tabasco. Next comes to breading. To keep these air fried catfish nuggets gluten free, I coated them in the mixture of Bob’s Red Mill paleo baking flour, ground pecans, and Cajun seasoning. The result was a light, crispy coating that had an earthy, nutty flavor and just a small kick of heat.

I could easily fit about six pieces of fish in my air fryer at a time, which meant I had to make a few batches, but they were done in 8 minutes so it went quickly. For contrast, the fish I cooked in the oven took 20 minutes and, while it was still tasty, it didn’t come out nearly as crispy. 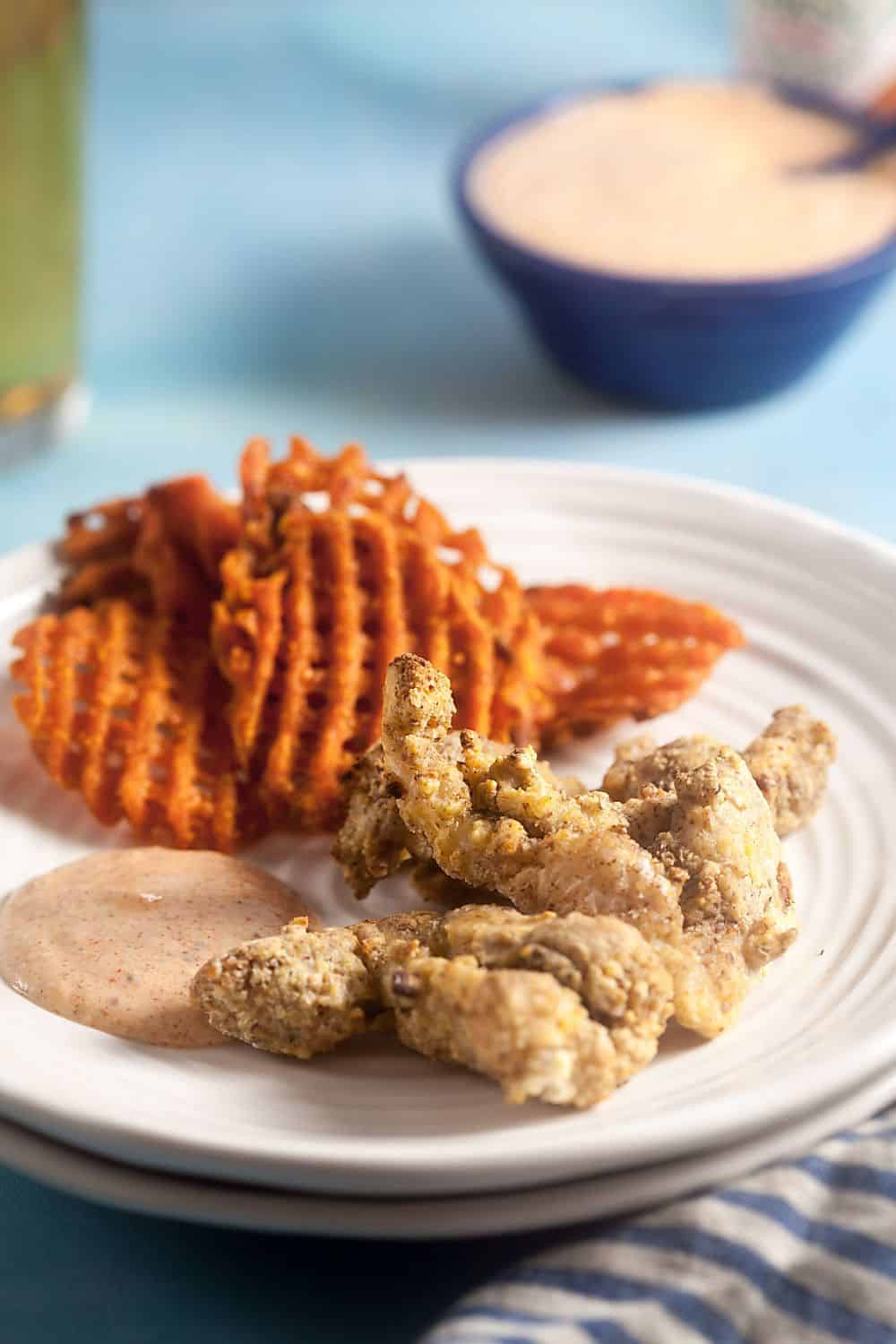 Combine the water and salt in a large bowl; stir until dissolved. Add the catfish. Cover and refrigerate for at least 20 minutes, up to overnight. Rinse the fish with clean water and pat dry.

While the fish soaks, prepare the remoulade by mixing all ingredients together in a small bowl until smooth. Refrigerate until ready to serve.

Add the flour and pecans to a blender. Blend 15-20 seconds, or until the pecans are pulverized and look like coarse crumbs. Pour the mixture into a shallow dish.

Break the egg into a second dish. Add a few dashes of Tabasco and whisk until combined.

Working one piece at a time, coat each piece of fish with egg then dredge through the flour mixture to coat well.

If desired to extra crispness and browning, lightly spray each piece of fish with olive or coconut oil.

Working  in batches as needed, add the fish to the basket of your air fryer in a single layer. Cook for 6-8 minutes, turning halfway through.

Serve the catfish nuggets with remoulade sauce for dipping.