Red Potato Salad gets a makeover with creamy chimichurri dressing made with Greek yogurt, plus Spring vegetables like asparagus and radishes. It’s so easy to make that it’ll be your new go-to side dish for summer.

I created this recipe for my client, Steamables Side Delights. Thank you for supporting the brands that keep me inspired in the kitchen. 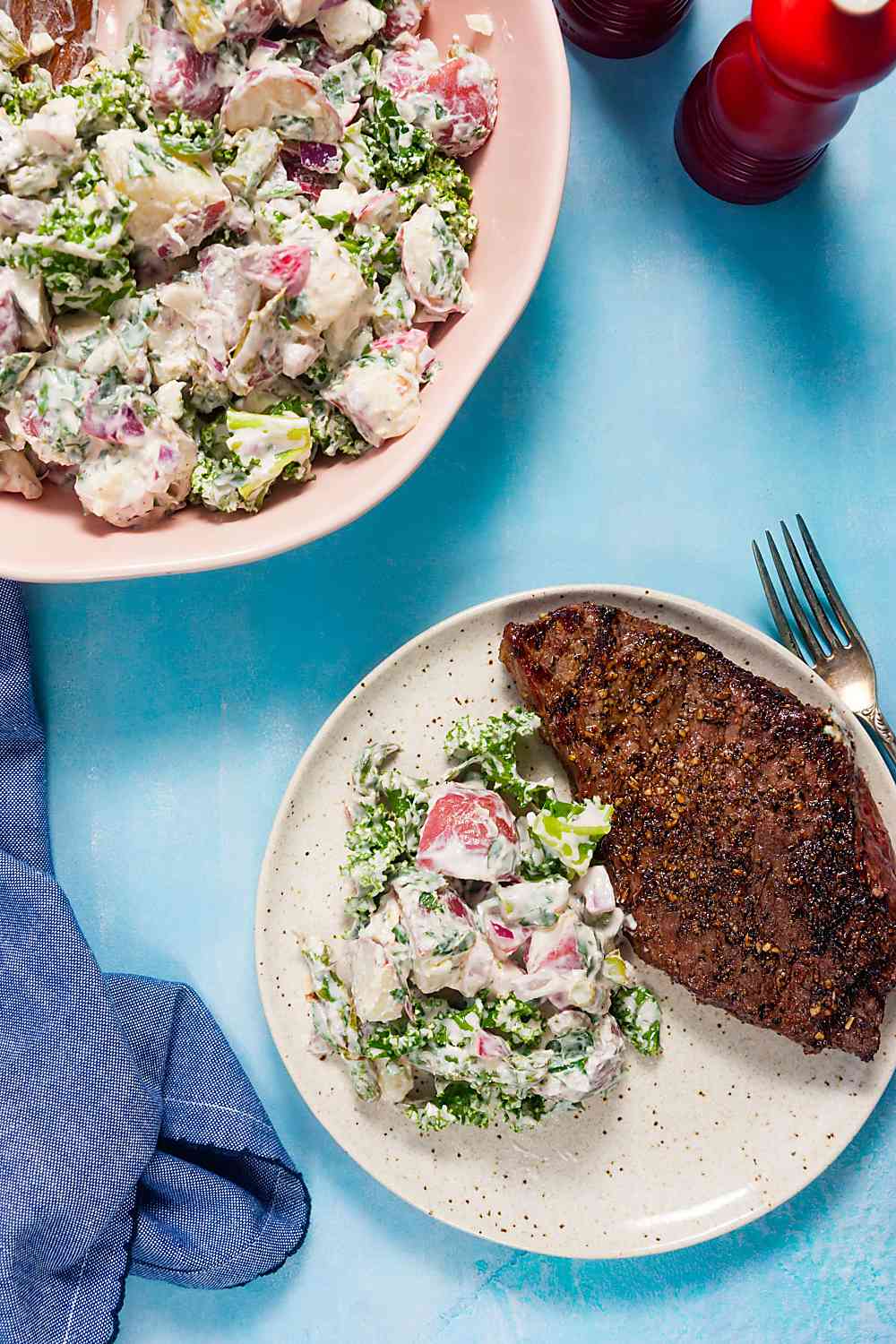 Once it’s nice enough outside to grill, weeknight dinners get so much easier.  As long as the sun is shining outside, odds are pretty good that you’ll find a big bowl of potato salad or pasta salad in our refrigerator. Its easy to make ahead, keeps well, and can be paired with just about any protein for a quick and easy meal. Plus if you load them up with veggies they can even double as lunch!

Since I don’t eat mayonnaise, I’ve gotten pretty creative with my potato salad over the years. My signature salad has a creamy dressing made with Greek yogurt and hummus, but I also love to make Nicoise-style potato salad with mustardy dressing and, if I’m feeling fancy, warm potato salad with sherry vinaigrette.

I felt like I needed another creamy potato salad in my repertoire, so I developed this red potato salad with creamy chimichurri dressing. Chimichurri is a zippy Argentinean condiment made with loads of garlic, parsley, and red wine vinegar – I’m obsessed! Chimichurri is traditionally paired with grilled meat or seafood, but I also love using it as the base for a vinaigrette or even as an easy way to jazz up an egg sandwich. For this potato salad recipe, I combined the flavors of chimichurri with Greek yogurt to make a creamy dressing with a ton of flavor. 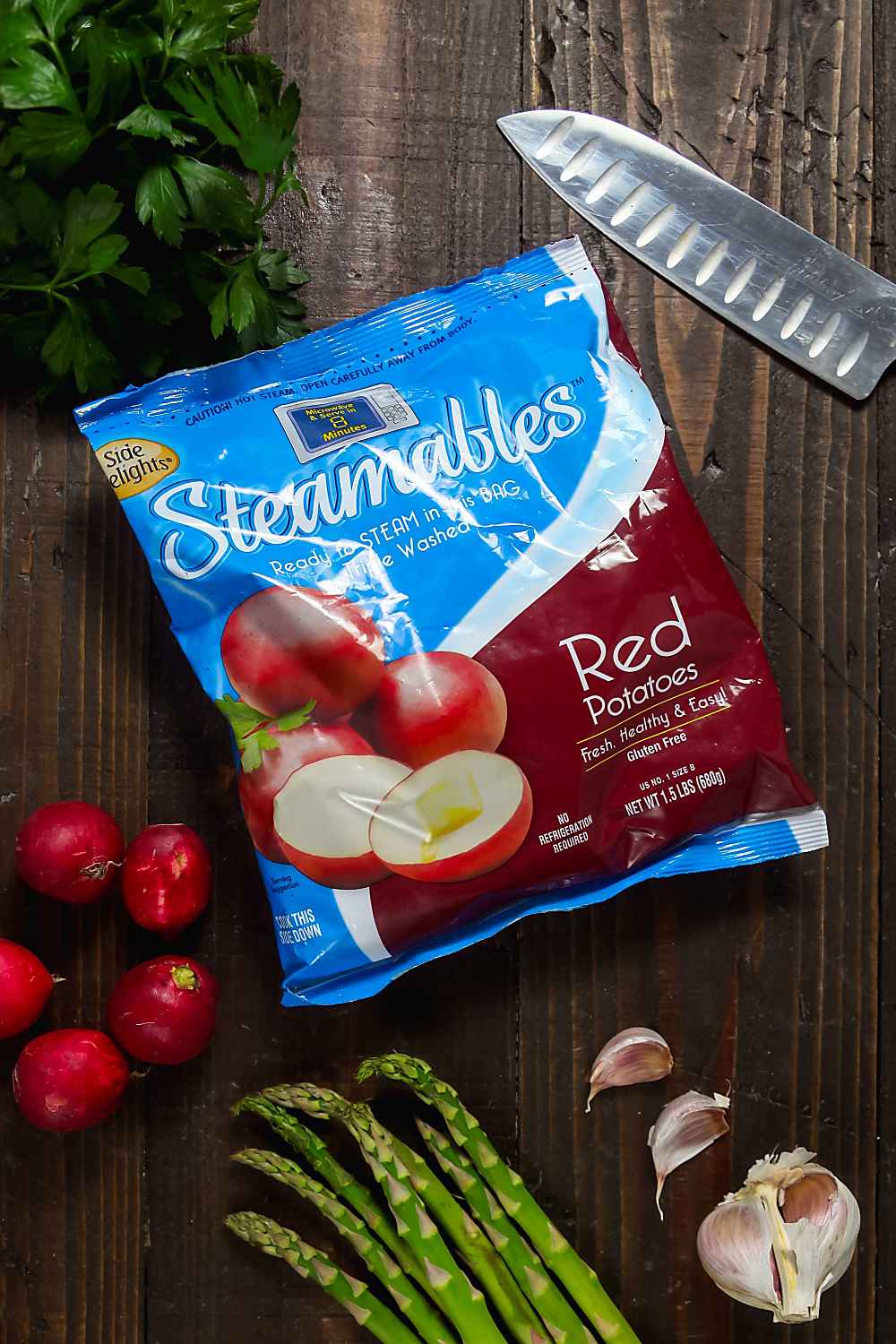 The one downside to making potato salad is that I’m reallllly impatient. I hate waiting for water to boil, and potatoes can take a long time to cook! For a while, Shawn banned me from cooking them because he was tired of me serving them to him half raw. Luckily I’ve gotten better over the years (an induction burner helped!) so they’re back on our table.

A year or two ago I discovered Steamables potatoes, which make things even easier. They’re triple-washed and come in a bag that can go right into the microwave. All is takes is 7-8 minutes and the potatoes come out perfectly cooked every time.

Plus, these smaller sized potatoes are just super cute! Sometimes I buy them, cut the bag open, and roast them because I know they’ll always be great. (Plus there are purple ones!) 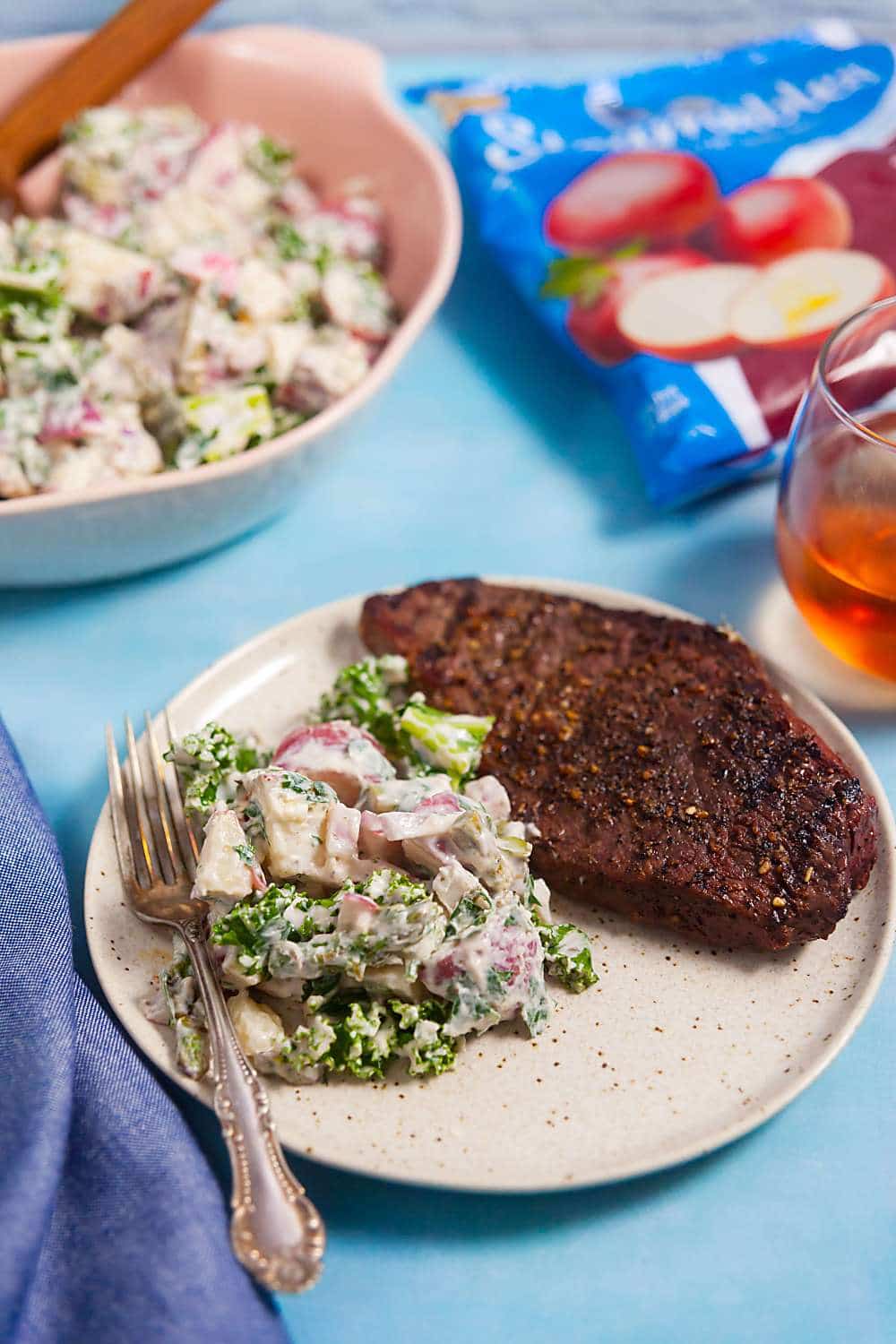 How to make Red Potato Salad with Creamy Chimichurri Dressing

To make this red potato salad, start by cooking your potatoes. While they cook, heat a little bit of oil in a pan and ass some asparagus. Cook it for about 3 minutes on each side, until it’s lightly charred. Set the potatoes and asparagus aside until they’re cool enough to handle.

Cut the potatoes into quarters and the asparagus into 1-inch pieces, then add them to the dressing along with some chopped kale and radishes. I love the peppery crunch that radishes add to the potato salad, but you can leave them out if they’re not your jam.

Mix everything up and refrigerate it until it’s thoroughly chilled. The potato salad will keep for a few days, but the dressing can start to taste flat after a while. If that happens, mix in a glug or two of vinegar to perk things back up. 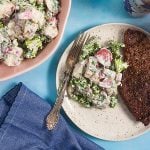 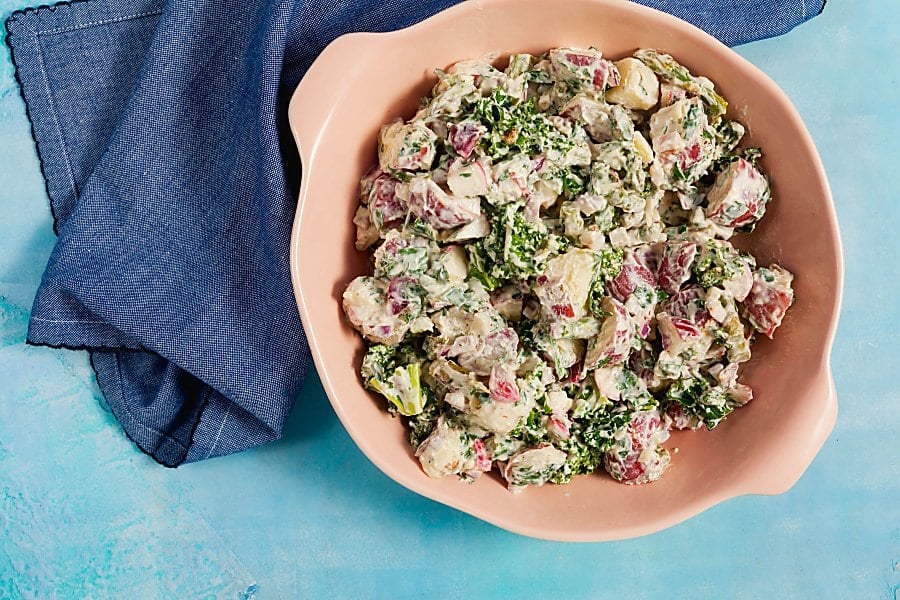 5 thoughts on “Red Potato Salad with Chimichurri and Spring Vegetables”