A combination of fat free yogurt and hummus make a cool, creamy dressing for this mayo free potato salad.

There’s a first time for everything:

Yeah, you read that right. I only recently had my first bite of creamy potato salad.

My aversion to mayonnaise (sorry, I know some of you think it’s good, but I find it repulsive!) had always prevented me from enjoying this delicious salad. Until now.

What can you substitute for mayonnaise in potato salad?

I was flipping through a recent issue of Food+Wine when I saw this idea. It looked like a normal homemade potato salad, but it used hummus and yogurt.

And, most notably, no mayo.

This potato salad recipe immediately got added to my “to try” list.

So one night we decided to grill up some burgers, and I knew that it was the perfect time to try this no mayo potato salad.

I mixed it up, but I have to confess it looked so much like the potato salad dressing that I’ve been avoiding all these years that I was a little hesitant to take a bite. (Which was ridiculous since I made the stuff and I knew that there was absolutely no mayonnaise in it.)

So I took a small nibble.

And it. was. awesome.

It turns out that the combination of yogurt and hummus makes the perfect mayo substitute!

I mean, we were lucky that there was any left by the time the burgers were done – I couldn’t keep out of it!

For those of you who hate mayo, or who just love potato salads, this is a great substitute. Those of you that do eat mayo will enjoy it too – Shawn said that it actually tastes very similar. It’s cool, creamy, and slightly tangy. The hummus flavor isn’t nearly as pronounced as you might imagine it would be, and it has a whole lot less fat (about 5 grams of fat in mine, compared to over 20 grams in traditional versions.)

This has become one of those recipes that I make over and over again, and it’s something of a signature dish for me at summer cookouts. If you’re looking for a lighter alternative to potato salads that’s made with real food ingredients, go ahead and give it a try — I bet you’ll become a huge fan, too! 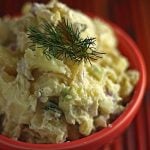 A combination of fat free yogurt and hummus make a cool, creamy sauce for this mayo-free potato salad. I used Greek yogurt to prevent the sauce from becoming to watery, but regular yogurt could also be used. Add in whatever your favorite potato salad ingredients are; this recipe is only a guideline. I do like the crunch that the celery and pickles added though - without them the salad would be too mushy.
No ratings yet
Print Pin SaveSaved!
Servings: 4
Calories: 193kcal
Author: Lauren Keating
Prevent your screen from going dark