This simple salad can be on the table in 15 minutes, but Canadian bacon and chimichurri dressing give it tons of flavor.  With under 300 calories per serving, it’s great as a side dish (I like it with a baked potato) or as a light meal. 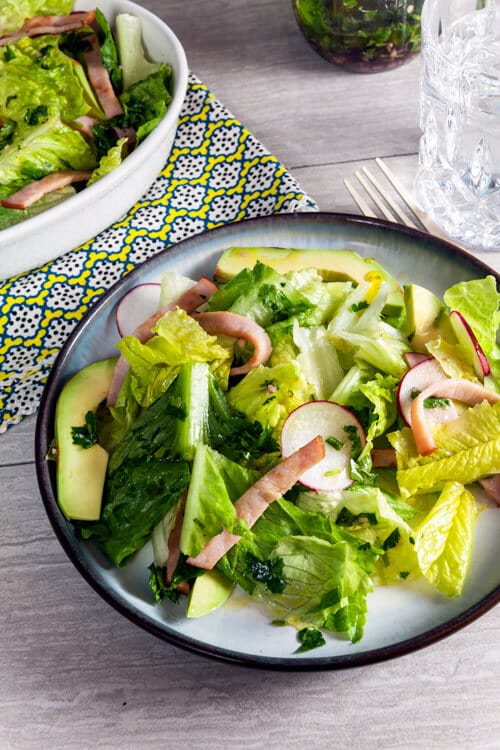 What’s the first thing you think of when you hear Canadian Bacon? I’m guessing it’s not salad. (It might not even be food; I’ll admit that 50% of the time, my brain goes right to the movie.)

It’s not very often that we see this meat at meals other than breakfast, but it works really well in all sorts of dishes. I love using it in soups and stews like this Canadian Bacon and White Bean Pot Pie and it’s also a delicious addition to succotash.

Lately, one of my favorite breakfast sandwiches has been sourdough bread with Canadian Bacon, an over-medium egg, sliced avocado, and chimichurri sauce. I love the way that the meaty bacon pairs with the fresh herbs in chimichurri.  I decided to use the same flavors in a salad and I was so happy with how it came out – it’s super easy, but it’s one of the best simple salads I’ve made. 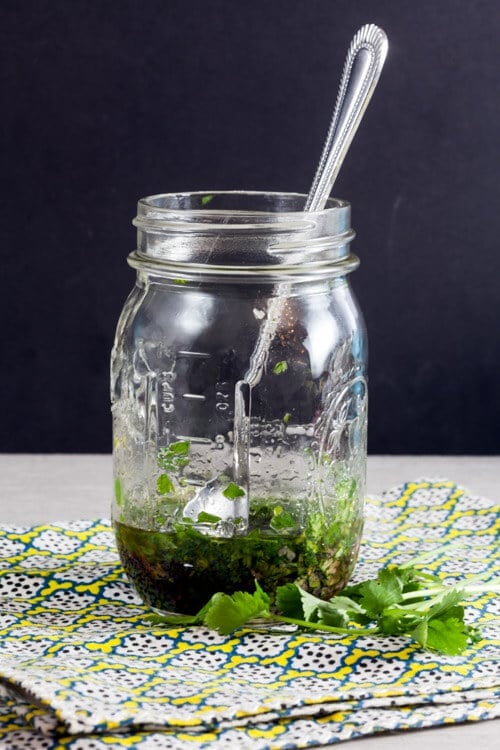 Picking the lettuce was probably the most difficult part of creating this salad. I wanted something sturdy enough to stand up to the Canadian Bacon and avocado, but with a mild flavor that would let the chimichurri dressing really shine. I ended up settling on romaine hearts, which was the perfect choice. I also added some radishes to break up the heaviness of the other ingredients (they also add a nice pop of color to the otherwise green salad.)

The dressing is so easy to make – it’s basically just chimichurri sauce thinned out with extra oil and red wine vinegar. To make it, you just mash some garlic into a paste and then combine it with fresh parsley and cilantro. It’s a really easy way to add bright, fresh flavor to your meals in the winter when there’s not much produce in season.

I used Canadian Bacon from Jones Dairy Farm. It’s very lean and has a clean flavor that isn’t too salty or smokey. I’m able to fine it easily in all of our local grocery stores (Shop Rite, Hannaford, and Price Chopper) but you can use their store locator to find it near you. 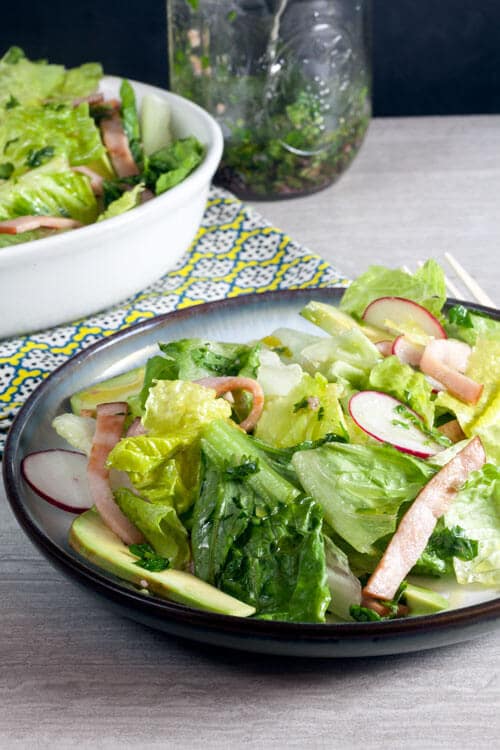 Nutrition Facts
Canadian Bacon and Avocado Salad with Chimichurri Dressing
Amount Per Serving
Calories 277 Calories from Fat 201
% Daily Value*
Fat 22.3g34%
Cholesterol 8mg3%
Fiber 3.8g16%
Protein 15.1g30%
* Percent Daily Values are based on a 2000 calorie diet.
Tried this recipe?Mention @HealthyDelish or tag #HealthyDelish!
This post was sponsored by Jones Dairy Farm, a brand that I’ve used for years. Thank you for supporting the brands that help keep me inspired in the kitchen!

36 thoughts on “Canadian Bacon and Avocado Salad with Chimichurri Dressing”