On a cold day, there’s nothing better than a steamy mug of potato soup! This lightened-up loaded baked potato soup is just as rich and creamy as traditional versions, but won’t leave you feeling weighed down. 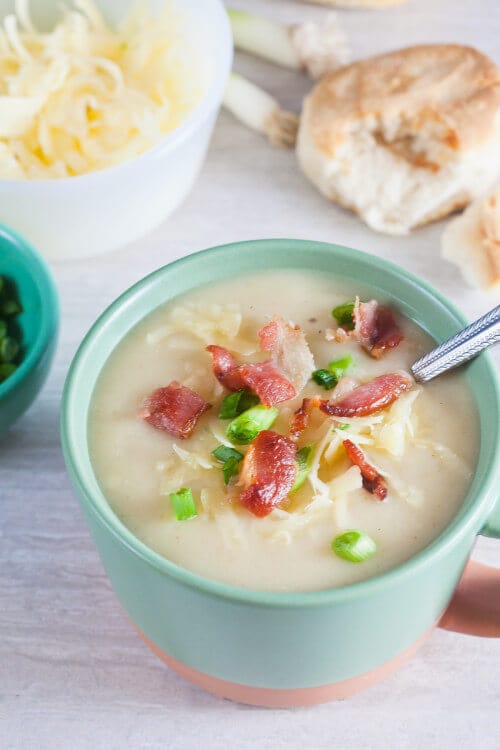 I hope you all like soup as much as I do, because I’ll be sharing a ton of new soup recipes this year! Not just because it’s unacceptably cold outside, but because I’ve signed on as a contributor to the Food Fanatic web site. I’m the new “soup fanatic” and I’ll be creating two new soup recipes for them every month. And I get to share them here, too! I might not post every single one here on Healthy Delicious, but I’ll definitely share my favorites.

Soup fanatic or not, I’d probably be sharing a soup recipe right now anyway. It was 47-degrees inside my house when I woke up the other morning. If I disappear suddenly, it’s probably because I couldn’t take anymore and up and moved to a tropical island someplace. All I want to do is curl up with a bowl of chowder or creamy potato soup to keep me warm.

Loaded baked potato soup usually seems like a good idea at the time, I almost always end up regretting it: it’s so heavy and creamy that it zaps all of my energy and leaves me with a stomachache. Luckily, I have a few tricks up my sleeve for a lighter loaded baked potato soup without the heaviness of traditional recipes. This way, I get to enjoy my soup and the rest of the day, too! 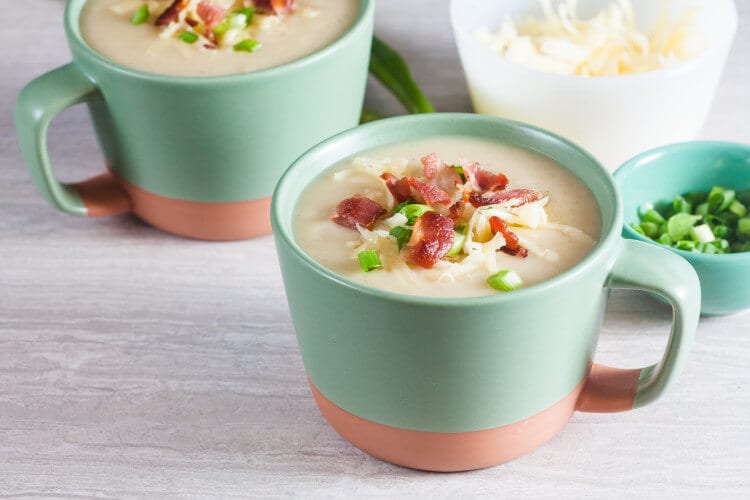 First, I use white potatoes instead of the more common russets. White potatoes have a medium level of starch and a smooth, creamy texture that blends up beautifully without the addition of milk or cream. Since their skins are very thin, you can blend them right into the soup for extra nutrition (plus who ever feels like peeling potatoes anyway?)

Instead of using all potatoes, I blend in some cauliflower. Cauliflower has a mild flavor that is almost unnoticeable after it’s blended in with the potatoes, and it keeps the soup from becoming too dense. I’ve found that using a 2:1 ratio of potatoes to cauliflower results in the best flavor. You can tell it’s there if you’re paying attention, but this is definitely still potato soup! (If you’re looking for a pure cauliflower soup, try this creamy cauliflower soup with piri piri shrimp.)

I love sour cream on my baked potatoes, and a dollop of Greek yogurt in this soup adds a similar tanginess while also helping to bring the flavors of the soup together.

Top the potato soup with plenty of scallions, extra-sharp cheddar cheese, and crumbled bacon. When I’m in the mood for something a little spicier, I also love to add a few drops of hot sauce. 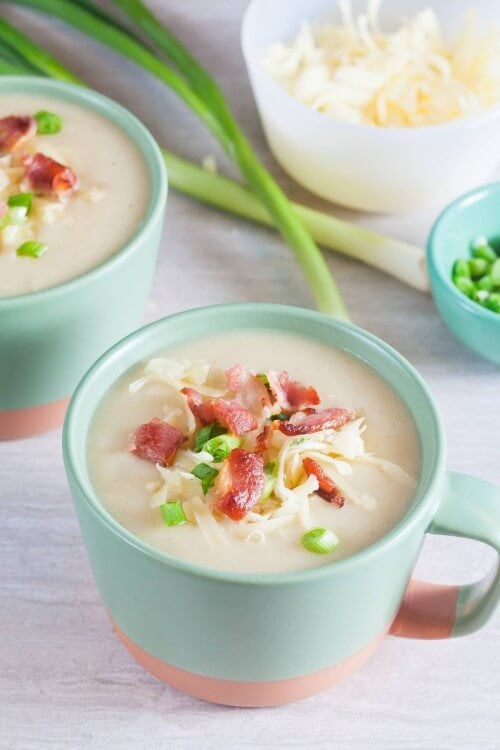