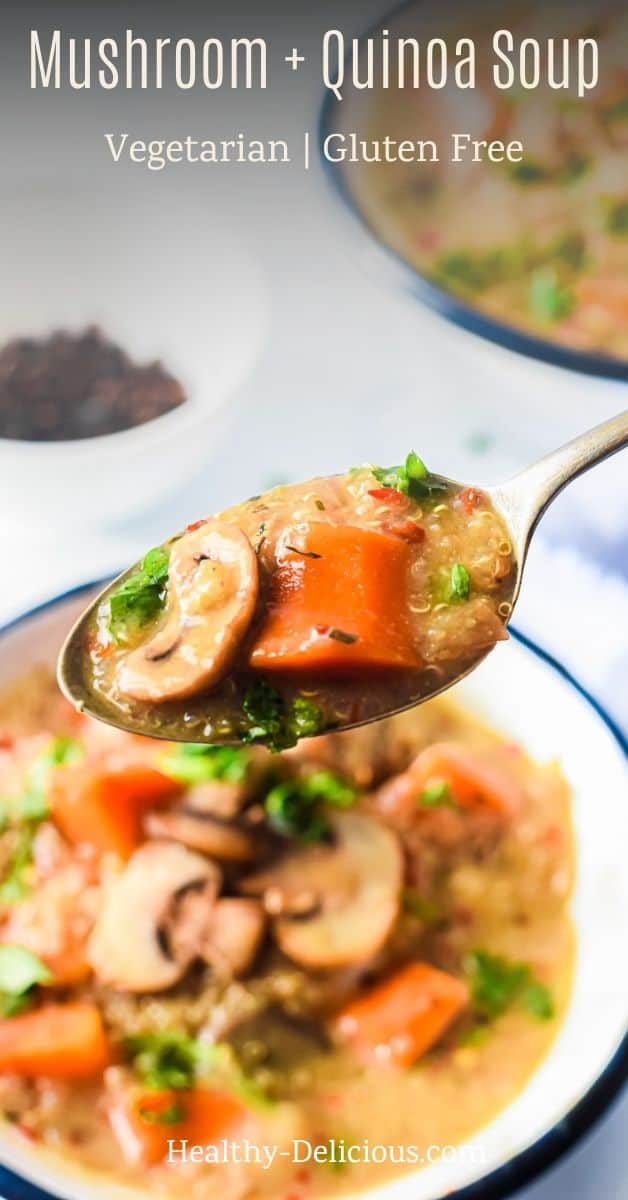 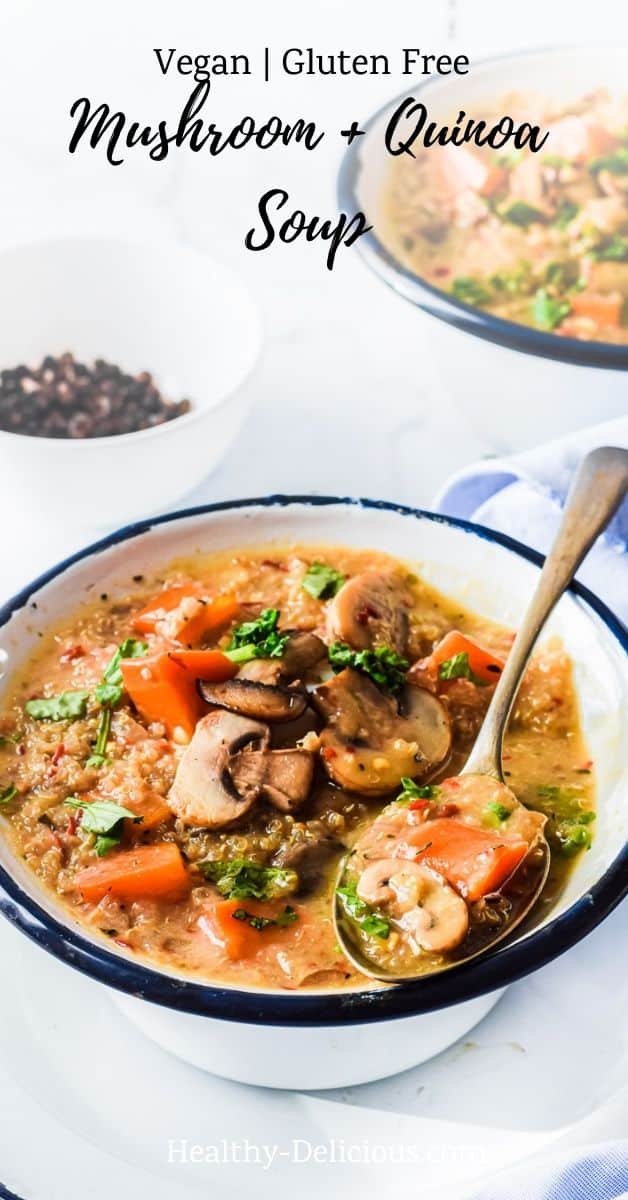 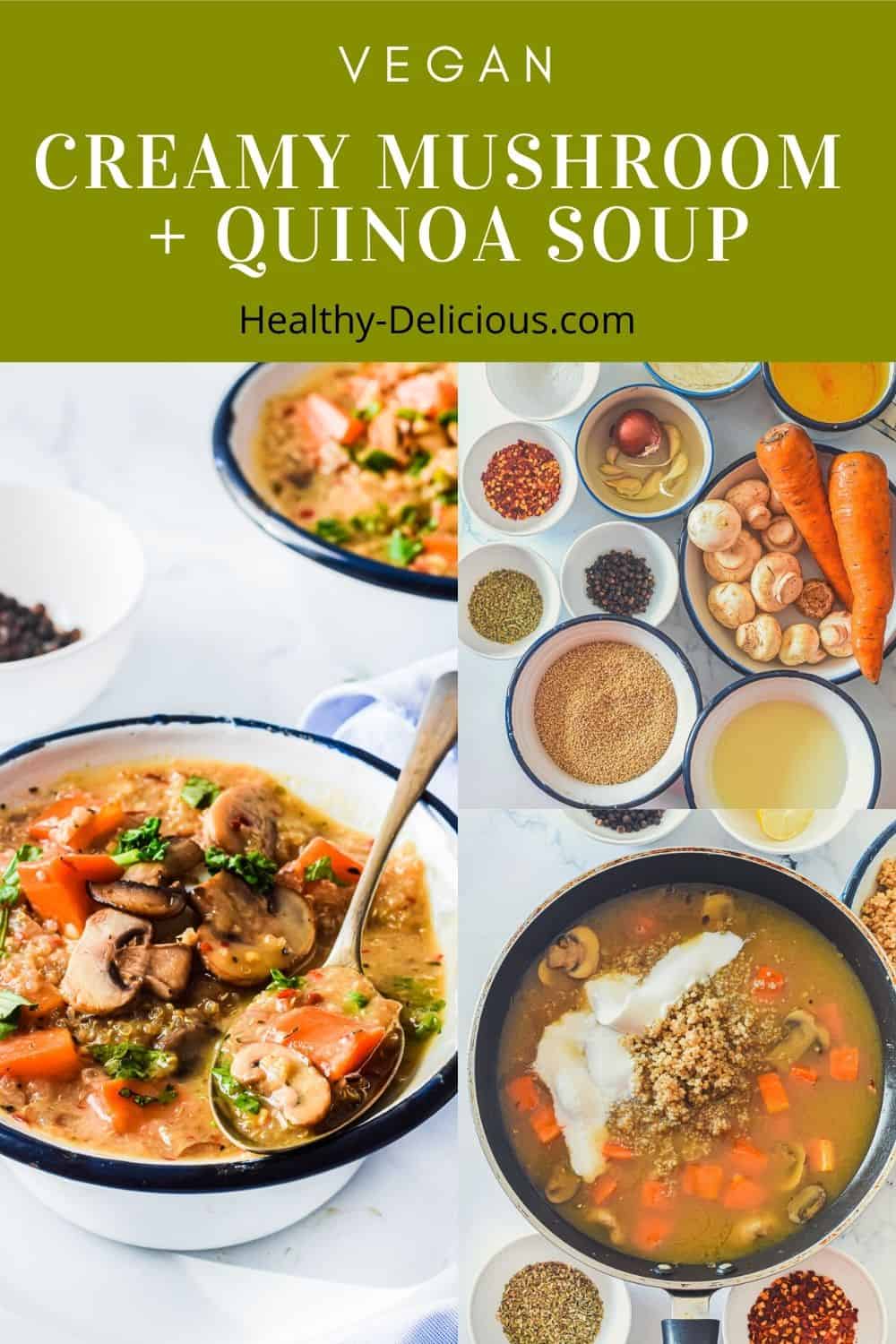 This creamy mushroom and quinoa soup is one of my favorite soup recipes. It’s warm and hearty, with tons of nutrition. Even better, this absolutely delicious vegan mushroom soup is entirely plant-based and gluten-free!

If there’s one thing to know about me, it’s that I love soup. I could probably eat it every day, especially in the fall and winter, and I have enough soup recipes to fill a book (maybe even two!).

You’re going to love this healthy vegetable quinoa soup recipe, I just know it! It’s basically the perfect soup for a rainy fall day: warm and cozy with tons of texture and flavor to keep things interesting.

Just like my super popular chicken and cauliflower rice soup, this quinoa soup gets is enriched with coconut milk. This gives the broth a luxuriously silky texture and creamy flavor while keeping the recipe entirely vegetarian.

This recipe relies on nutritious kitchen staples to give it tons of flavor. This is great because if you keep a well-stocked fridge, you’ll be able to throw this healthy soup recipe together any time a craving hits!

To make it, you’ll need:

Quinoa is great in everything from soups like this one. You can also use it as a base for grain bowls, a filling for stuffed mushrooms or peppers, or even as a gluten-free breading for chicken fingers! If you haven’t tried it yet, I highly recommend it.

While often used as a grain, quinoa is actually a seed from a plan native to Peru. It’s related to beets, chard, and spinach — but it definitely doesn’t taste like any of them!

Quinoa is a good source of protein, iron, and fiber, and is often called a superfood for its robust nutritional profile.

In nature, quinoa seeds are coated with bitter substances called saponins. These help keep the plant safe by deterring animals from eating them as well as protecting them from bacteria, fungi, and viruses.

These saponins are extremely bitter and can leave you with an upset stomach. Luckily, they can be removed easily by rinsing the quinoa well before you cook it.

To remove the saponins, add the quinoa to a fine mesh colander and place it under running water. Swish the quinoa around to help loosen it up and ensure the water flows between each seed. It will look foamy and cloudy at first, but once the quinoa is thoroughly rinsed, the water will be clear.

A lot of commercial quinoa these days is sold pre-rinsed, but it never hurts to give it a good rinse just in case. I accidentally bought unrinsed quinoa once and didn’t rinse it myself — trust me, I’ll never make that mistake again!

Can I use lite coconut milk instead of full fat?

Coconut milk is a great way to add a creamy element to dairy-free soup recipes but a lot of people ask if they can use lite coconut milk instead so cut calories and far.

Seriously! Look at the nutrition label and you’ll see the ingredients are just coconut milk and water. Some brands will also add gums and stabilizers to make it resemble the texture of full-fat coconut milk, but those can throw off both the flavor and texture.

Does putting watered-down coconut milk in your soup sound good? It would be like adding skim milk instead of cream! It will just water it down and dilute the flavor.

Of course, you could use it and then boil the soup down the make it thicker, but at that point you could have just started with a smaller amount of full-fat coconut milk in the first place since you’re basically just cooking the water back out of it.

Lite coconut milk definitely has it’s place, but you can make it yourself by adding water to full fat coconut milk. You’ll end up getting twice the amount for the same price.

TLDR? Just use full fat coconut milk. Your taste buds will thank you.

Also, be sure not to confuse coconut milk with coconut milk beverage, coconut cream, or cream of coconut. Here’s a great article outlining the different types of canned coconut that are available. 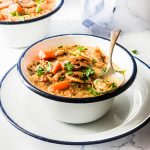