Lightened Up Stuffed Pepper Soup has all the flavor of your favorite stuffed peppers suspended in a flavorful broth. Cauliflower Rice adds nutrition and keeps things on the lighter side.

This stuffed pepper soup is the fourth in a series of recipes I created for Moyer Beef. Moyer can be found in many Tops Friendly Markets across the Northeast. 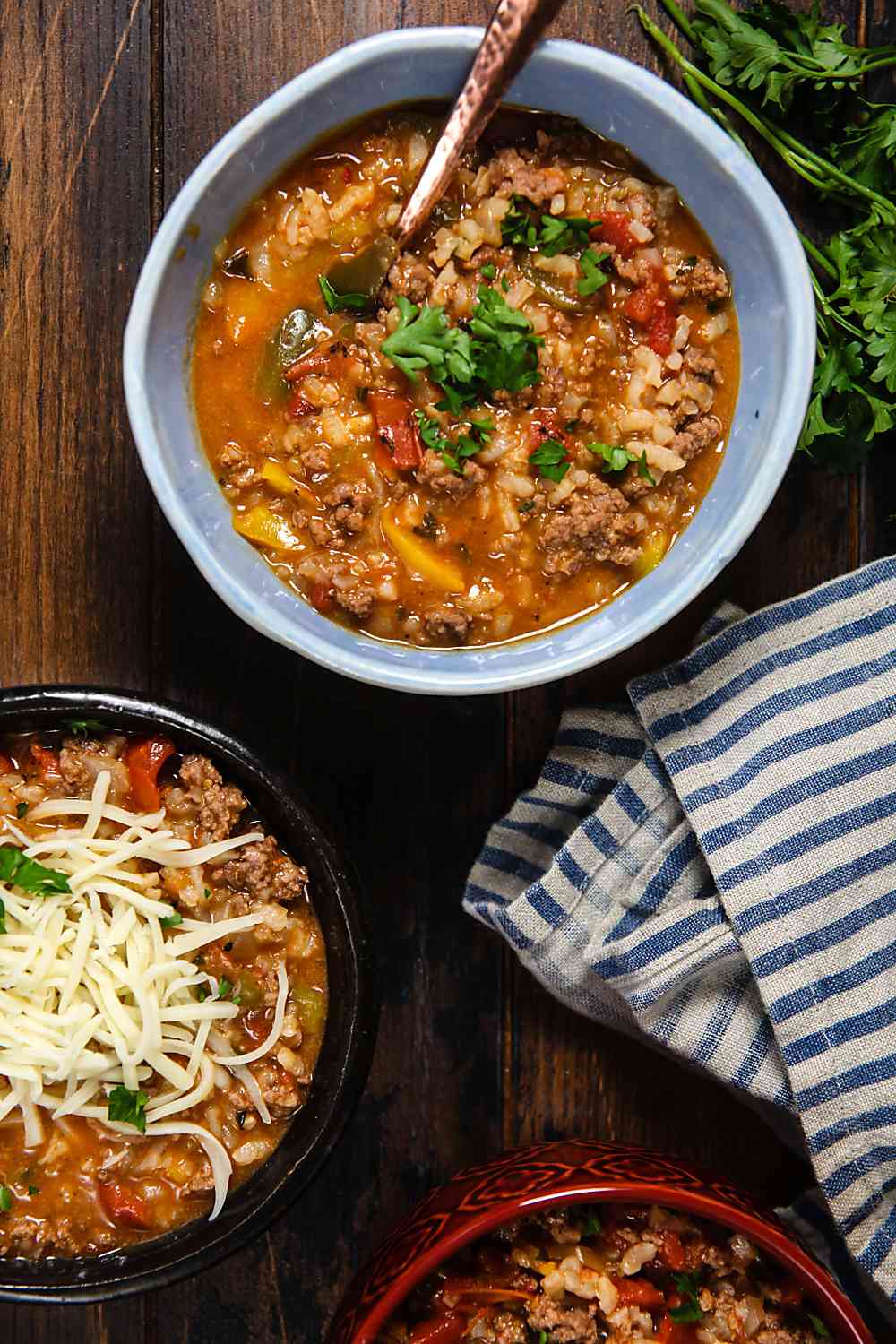 Earlier this winter, I had the idea to lighten up my favorite classic stuffed peppers by turning them into a brothy stuffed pepper soup. That way, you could serve up as much (or as little) as you’d like. A quick Google search shows me that I’m far from the first person to come up with this idea, but I’m pretty sure my recipe is the best. Seriously, it’s ridiculously good and I can’t get enough of it – especially in this frigid weather. It’s perfect for a snow day, a sick day, or lunch at your desk. 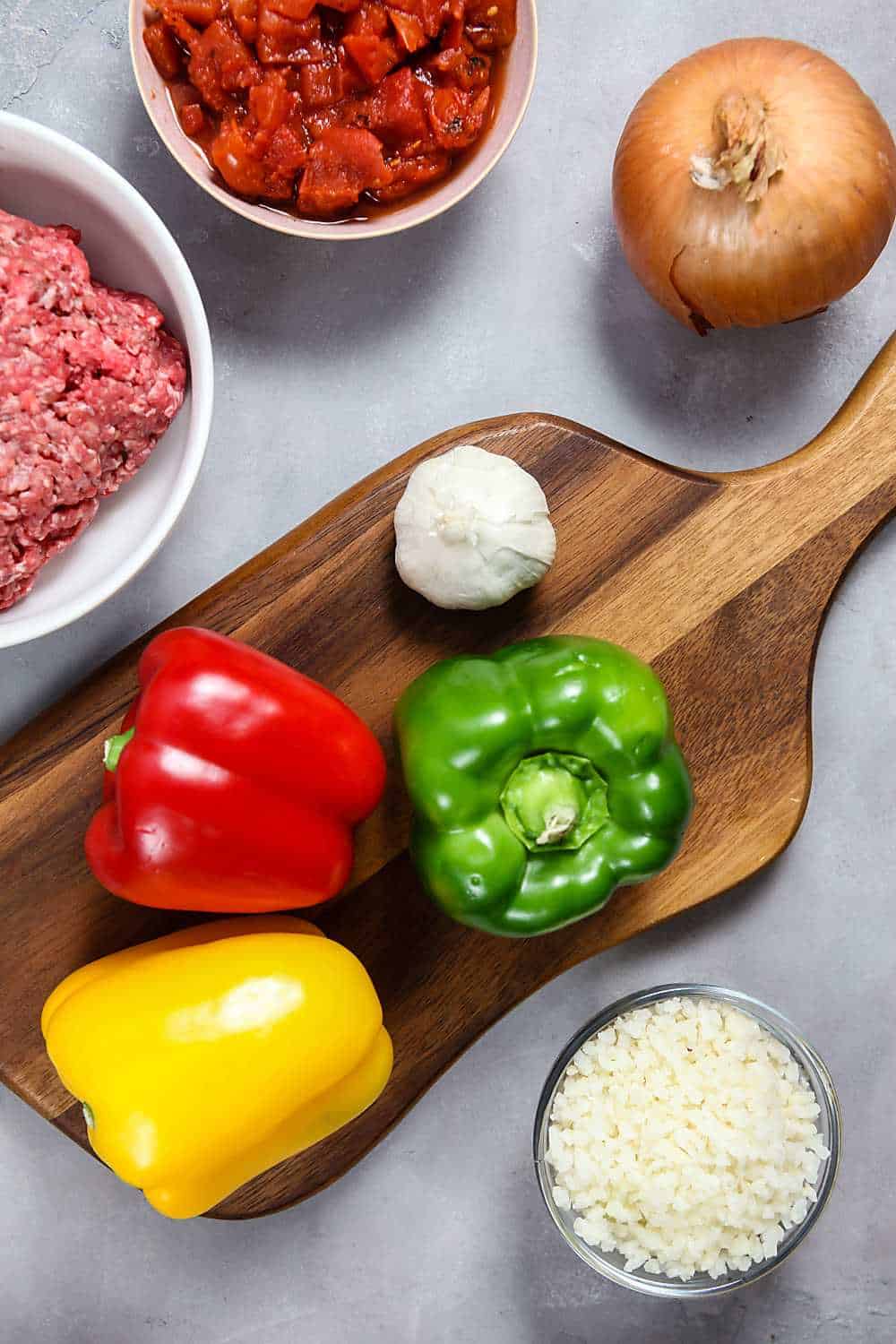 So, what makes my stuffed pepper soup soup good?

I start with quality ingredients, like Moyer ground chuck. Moyer beef is sourced from small family farms in New York and Pennsylvania and it’s all graded USDA Prime or Choice. As opposed to more generic  “ground beef” you know exactly what you’re getting with their ground chuck – a ground version of the same chuck that I use in my slow cooker red wine beef.

I brown the beef in a tiny bit of oil to give it loads of flavor, then remove it from the pot leaving just a little bit of grease behind to cook the onions, peppers, and garlic in. A good splash a white wine adds a nice touch of acidity and helps brighten up the flavor of the soup while tomato pastes deepens the flavor of the soup.

Next, I add chicken stock and fire roasted tomatoes. Using fire roasted tomatoes instead of regular tomatoes adds another layer of flavor and mimics the roasted flavor that stuffed peppers get in the oven. All of the flavors meld together beautifully while the soup comes to a boil. Once the soup is boiling, I add some white rice – just a little bit because I love the flavor that it contributes. The rice cooks while the soup simmers, then I add cauliflower rice and parsley at the end. This is actually a great recipe to try if you’re new to cauliflower rice – in the end, it’s almost indistinguishable from the regular rice.

To make this stuffed pepper soup recipe Whole 30 compliant – or just to lighten it up even more – omit the white wine, leave out the white rice, and use two cups of cauliflower rice instead of one. 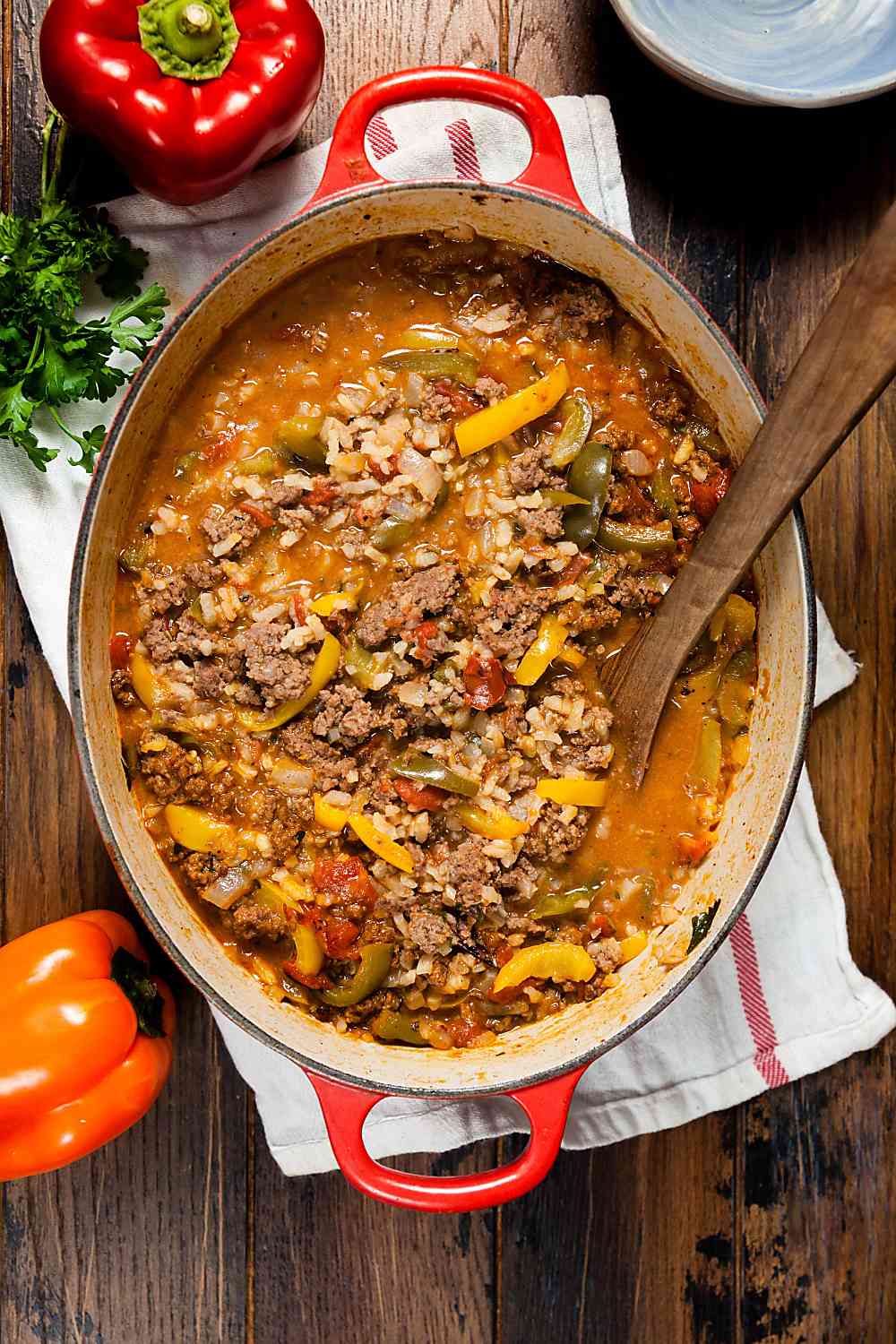 If you don’t care about that, a little shredded mozzarella on top is fantastic. Either way, you can’t go wrong.

If you choose to make this soup with white rice, it will thicken as it sits and the next day it might resemble chili. That’s okay! You can eat it that way, or just add a little water to thin it out before you reheat it.

Heat the olive oil in a large pot set over medium-high heat. Add the ground beef and cook, breaking up with a spoon until browned, about 5 minutes. Transfer the meat to a plate, leaving about 2 tablespoons of juices in the pot.

Add the onion, garlic, and bell peppers to the pot and cook until softened, about 5 minutes. Stir in the wine, if using, and cook until mostly evaporated.

Stir in the crushed red pepper and tomato paste and cook 1-2 minutes. Add the chicken stock and tomatoes; return the beef to the pot and bring the soup to a boil. Add the rice and simmer 10-15 minutes, or until cooked through. Stir in the cauliflower rice and parsley and cook until warmed through. Season to taste with salt and pepper.

For a whole 30 version, omit the wine and white rice; stir in 2 cups of cauliflower rice at the end. For a paleo option, skip the wine and/or rice if you don't eat those.