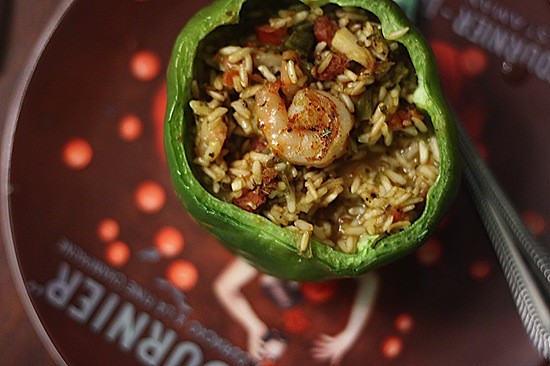 Lesson learned: If you find yourself adding Tablespoons full of cayenne pepper to recipes and you still don’t think they’re spicy enough, buy some new pepper! A million apologies to the few people who recently emailed me that recipes were far too spicy – I realized that my cayenne was ancient! I bought a new jar and wow, what a difference. I’ve adjusted the amount that my recipes call for more appropriate levels. With that said, I do like things pretty hot so if you have a lower tolerance you might want to use even less.

Now that that’s out of the way… I’ve been on a stuffed peppers kick lately — after not making them for over a year, we’ve had them for dinner twice in as many weeks. My favorite version so far has been these Jambalaya-Stuffed Peppers – instead of putting peppers in the jambalaya, I put the jambalaya in the peppers!

What I loved most about these was the built-in portion control. One of these little guys left me feeling pretty full, but I know that had it not been for the pepper I could easily have polished off at least twice as much jambalaya (and gone back for more!). Of course, the fact that they tasted pretty awesome didn’t hurt either.

Want a quicker version? These jambalaya-stuffed peppers take a little longer to prepare than I typically like to spend on a weeknight meal, but they’re absolutely worth it. Plus they make great leftovers! If you’re really pressed for time though, there are a few shortcuts that you can take: 1) Use instant rice, which will shave about 20 minutes off the time the jambalaya simmers; and 2) Start cooking the unstuffed peppers while you prepare the jambalaya filling (yay multitasking!). Cook the peppers for 15 minutes on their own, then 15 minutes once they’re stuffed. Just keep in mind that although these methods will dinner on the table faster, the flavors won’t have as much time to meld. 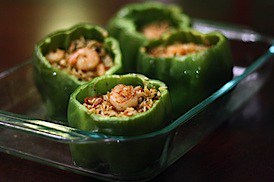 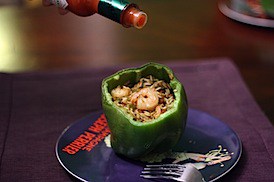 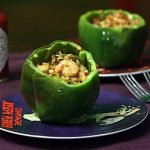 I really enjoyed this recipe with the green peppers, but I like green peppers a lot. Shawn prefers red peppers, which are a little less harsh. Feel free to use whatever color you like best!
No ratings yet
Print Pin Rate
Prep Time: 10 minutes
Cook Time: 1 hour
Total Time: 1 hour 10 minutes
Servings: 4
Author: Lauren Keating
Prevent your screen from going dark

Hungry for more Stuffed Pepper Recipes? Try one of these: