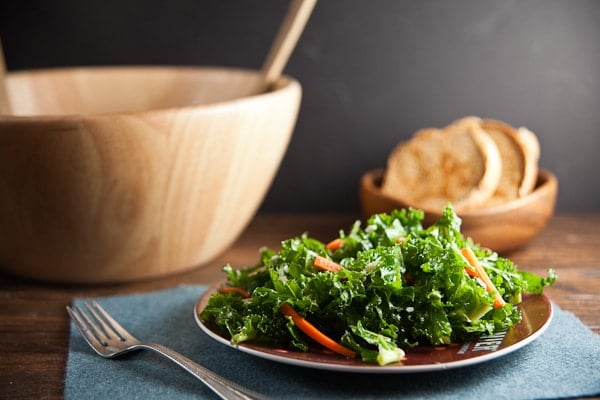 When you go out to eat, do you ever get into a rut where you always order the same thing? I’m definitely guilty of that – especially at the City Beer Hall. We eat there relatively frequently, and I almost always get the 518 burger, which I’ve deemed the best burger in town.*  The last time we went though, I was craving something a little healthier and ended up getting the kale salad.

It was love at first bite and I couldn’t shut up about how delicious it was. I was still thinking about it days (and weeks) later and knew that I’d have to try making it myself. 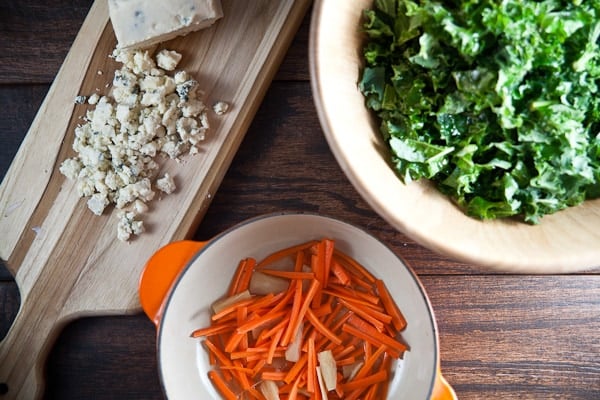 The salad is really simple, but the flavors are absolutely perfect together: It’s just kale, blue cheese, pickled carrot, and a balsamic vinaigrette. The Beer Hall also adds some cooked Farro and a little bit of lettuce (or maybe it was spinach) to theirs, which added some nice texture, but I skipped both because 1) I’m lazy and 2) I’m cheap and didn’t feel like buying two kinds of greens. (I also used about 90% less blue cheese.)

Really though, this salad is all about the pickled carrots. They’re a little bit sweet, a little bit spicy, and are like little rays of sunshine that brighten up the earthy kale. Even if you don’t like the idea of the salad, I urge you to make these carrots. Actually, make a double or quadruple batch of them – they keep well in the refrigerator and are great on all sorts of salads, with noodles, and on their own as a little snack.

I served this as a simple dinner with some garlic bread. We demolished the salad and left almost all of the bread uneaten.

* I know, I’m just as surprised as you are that a place that gives away free pizza with every beer and has a mechanical bull also has one of the best menus (featuring local ingredients, too!) in town. I guess you can’t judge a book, or a bar, by its cover. As for the second best burger in town? I say The Point, but Shawn is torn between them and New World. 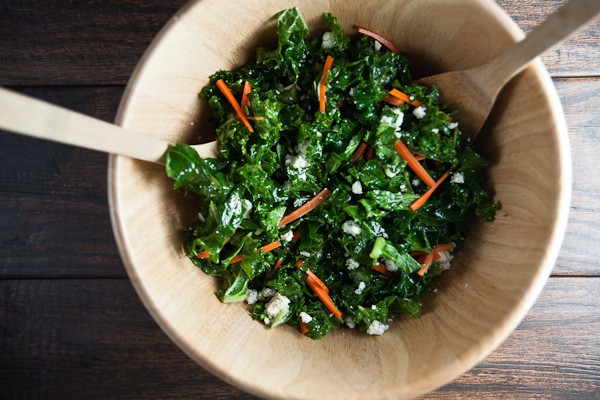