Slow-simmered goulash soup is a great way to warm up on a cold night. This amazingly rich and hearty soup recipe is easy to make and is naturally low carb and gluten-free! This recipe also freezes really well, so go ahead and make a double batch — future you says thanks!

Shawn and I stumbled across a new-to-us Eastern European restaurant late last fall. As soon as we walked in the door, we knew it was a special place – it smelled so good!

Everything on the menu sounded great, and we definitely ended up over ordering. It was worth it. Everything was homemade, and from phomemade pierogi to the stuffed cabbage, it all tasted like it came straight out of a grandma’s kitchen.

The star of the meal was a simple Hungarian goulash soup, full of tender beef and spicy paprika.

Growing up, Hungarian goulash made a regular appearance on our dinner table. It was one of my favorite dinners, but it was completely different than this goulash soup.

Mom’s goulash was made in a crockpot, and was a thick beef stew served over egg noodles.

While I was doing research for this goulash soup recipe, I was surprised to learn that there’s another version, often called American Goulash involving ground beef and elbow noodles. It’s basically homemade Hamburger Helper.

This goulash soup is an entirely different recipe. It’s a brothy soup filled seasoned with more paprika than I’ve ever seen a recipe call for before. But that paprika is what makes it so good! It gives the broth a rich rust color and an earthy, sweet and spicy flavor that’s really indescribable.

How to make Goulash Soup

At it’s most basic, Hungarian goulash is a simple meal of stewed beef flavored with paprika and onion.

When I say it’s flavored with paprika, I mean it’s flavored with a lot of paprika. You’ll use almost a half cup and it turns the soup a brilliant red color. Shawn didn’t believe me when I told him there weren’t any tomatoes in it!

Since you’ll be using so much paprika in this recipe, be sure to use one that’s good quality – I like to buy mine from Penzey’s or The Spice House.

Pro-Tip: I use a combination of sweet and hot paprika to give the goulash a little bit of zip. You can use all sweet paprika, if you prefer, or use up to half hot paprika if you like things spicier.

What you don’t want to do is use smoked paprika. As much as I love that scattered over the top of my cauliflower cheese soup, it’s strong flavor isn’t appropriate in this recipe.

What to serve with goulash soup

Like my roast vegetable soup, this Hungarian goulash soup is Whole 30 complaint. 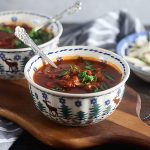