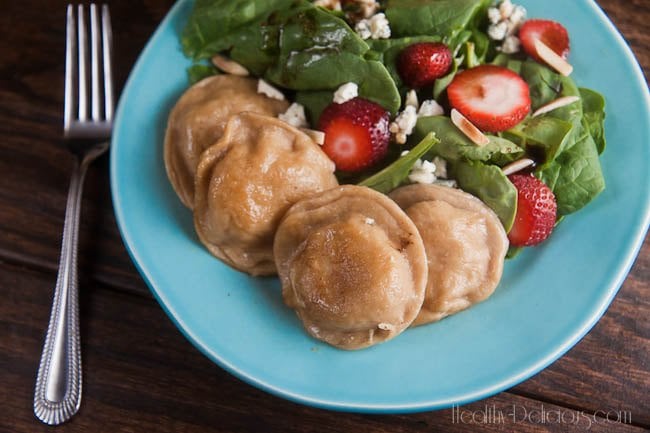 For Sunday Supper this week, we’re celebrating Father’s Day! When most people think of Father’s Day, they probably think of backyard barbecues, bacon, or beer. My Dad can cook a pretty mean ribeye, but grilling just isn’t what I think of when I think of him and food. What do I think of? Split pea soup. Kale and pig knuckle soup (way before kale was trendy). Bratwurst boiled in beer. Pinklewurst, bloodwurst, head cheese and other icky meats. Liver and onions. Peanut butter and pickles. Cream cheese and jelly.

Basically, a lot of stuff that I had no interest in making (except for the kale soup, which is awesome but not exactly seasonal.) He’s Polish and we ate Mrs. Ts all the time when I was a kid, so I made pierogi. And I went ahead and made ’em healthy by using whole wheat flour and swapping out some of the potato in the filling for cauliflower. 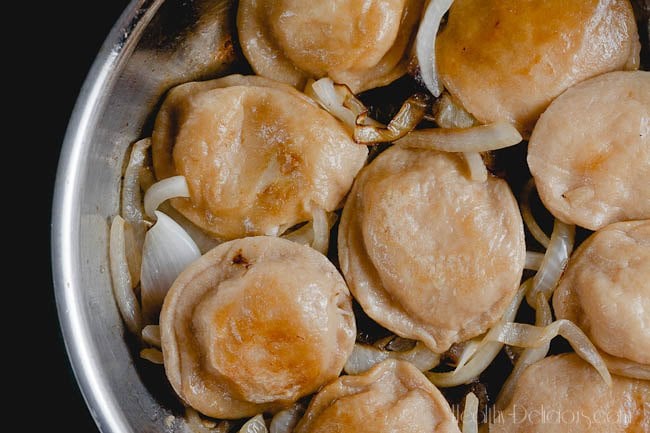 These pierogi are a little labor intensive but, once you get the hang of it, they’re pretty easy. They also freeze really well, so you might as well go ahead and make extra.

As for the age-old question of what to serve with pierogi besides sausage? I served them with a salad that I’ve been loving lately: spinach, strawberries, toasted almonds, and blue cheese with balsamic vinaigrette.