Skip to content
Vegetarian
No ratings yet
↓ Jump to Recipe 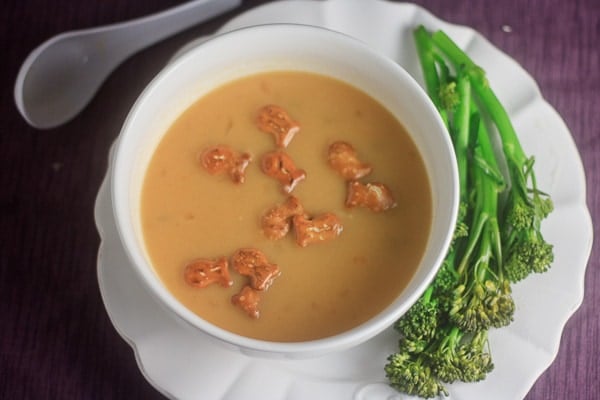 During my freshman year of college, there was a vegetarian station in my Quad’s dining hall. It was tucked away in the back corner, all the way on the other side of the seating area (God forbid there be any chance of Buffalo tempeh or curried lentils coming into contact with the pizzas or chicken patties served in the main section!). I honestly don’t think many students even noticed that it was there.

I wasn’t even close to resembling a vegetarian, but I found myself eating there most nights (it was only open for dinner) because the food was actually good! Unlike the mainstream options, the food wasn’t super processed. And, thanks to their focus on international cuisine, it actually had flavor. 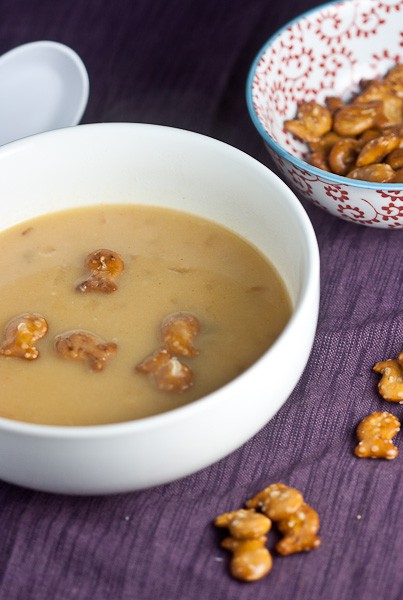 Ten years later, there are two dishes that stand out in my memory as being particularly fantastic: the Buffalo tempeh that I mentioned earlier and Vermont Cheddar Soup. Oh, that soup! My mouth still waters when I think about it.  I think Shawn had about three bowls of it – and it was a good thing he filled up when he had the chance, because we never saw it again. As far a I know, that was the one and only time it was served.
.
This cheddar and ale soup is my attempt at recreating, and improving on, that Vermont cheddar soup. Instead using cream, I thicken the soup with cauliflower puree, which adds almost no calories and boosts the amount of Vitamin C. Paprika and jalapeño add smoke and heat, giving the soup a warm depth. I also added some beer for good measure. After all, the recipe was inspired by college. 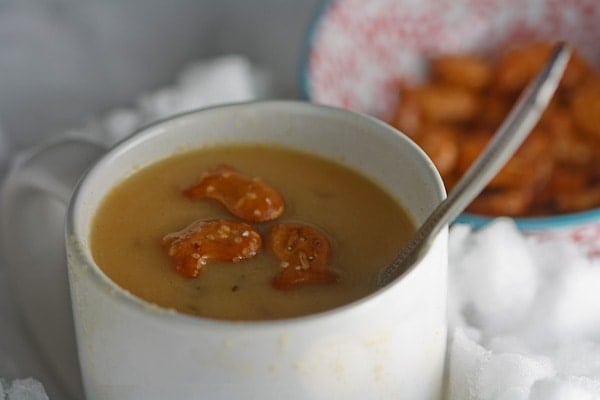 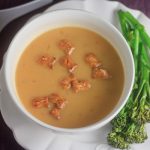 Despite being relatively low in fat, this soup is incredibly rich and hearty – you don't need to add much to turn it into a meal! Serve it simply with a piece of crust baguette or, my favorite, pretzel goldfish. A side of steamed broccoli rabe keeps things tasting light and fresh (and it's delicious dunked into the cheesy broth.) Don't be tempted to dump the cheese in all at once; if it isn't added slowly it will bind together into a huge congealed mass instead of melting into the soup. Also, steer clear of pre-shredded cheese. It's coated with starch and won't melt right at all. I like Cabot 50% Reduced Fat Sharp Cheddar.
No ratings yet
Print Pin Rate
Prep Time: 10 minutes
Cook Time: 30 minutes
Total Time: 40 minutes
Calories: 246kcal
Author: Lauren Keating
Prevent your screen from going dark