Beef on Weck is a huge tradition in Western New York, but it can be impossible to find in other parts of the country. Thanks to this easy recipe, you can make delicious beef on weck sandwiches at home with homemade slow cooked beef (make it in the crockpot!) and my secret to the easiest homemade kimmelweck rolls ever. 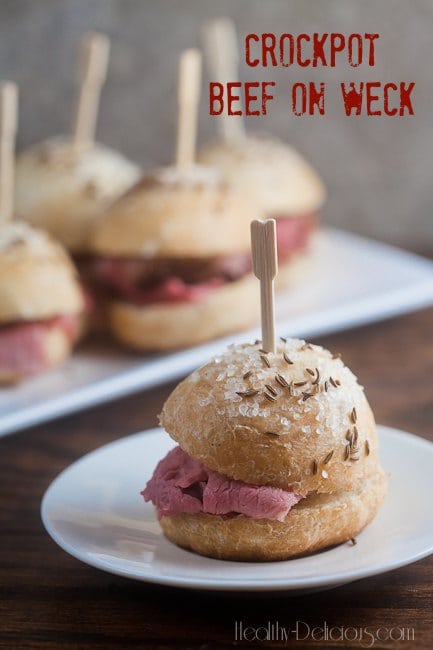 There’s so much awesome stuff going on in this recipe that I don’t even know where to start! I’m not even going to talk about how excited I am that football is back because… obviously.

I’ll give you a minute to let that sink in.

Seriously, I feel like this is life changing. I love roast beef, but making it is kind of a pain in the butt. Not anymore!

Throw it in there, let it do its thing, and two and a half hours later (a little longer if you want your cooked more) you’re rewarded with a piece of meat cooked so beautifully it might make you want to cry. There’s going to be a lot of roast beef in my kitchen this winter! Oh yes.

This roast beef is perfect for making the classic Buffalo staple, beef on weck.

What is Beef on Weck?

Beef on weck is a variation of a roast beef sandwich that’s popular in Buffalo, New York.

Anyway, to make a beef on weck sandwich, you slather the bottom of a roll with horseradish, pile it high with rare roast beef, and dip the top of the roll in au jus before placing it on top of the sandwich.

Beef on weck can be found pretty easily in Western New York (Charlie the Butcher is a must-visit in the area, but I’ve also had decent sandwiches right at the Bills Stadium/New Era Field.)

It’s hard to find these sandwiches once you venture out of upstate New York, but thanks to this recipe you can make great beef on weck at home.

I even made super easy homemade weck rolls by shaping store bought Italian bread dough into slider rolls. It’s so easy, and you’d never be able to tell if you didn’t see the wrappers in the trash.

How to make roast beef in a slow cooker

You can make roast beef in the oven, or even buy your favorite variety at the deli counter, but this method of making roast beef in a slow cooker is a total game changer.

Start by generously seasoning a beef roast with salt and pepper, then brown it all over in a pan on the stovetop. This will give you a beautiful golden crust on the outside of the beef.

Next, place the beef in your slow cooker and cook it on low until an instant-read thermometer shows it has an internal temperature of 140 degrees – it will take 2.5 to 3 hours, depending on the side of your roast.

Remove the beef from the pot and let it rest a few minutes before slicing it as thinly as you can.

That’s all there is to it! You don’t even need to add any liquid to the slow cooker. And the juices that are released from the beef make a delicious au jus, just like when you roast your beef in the oven.

These homemade beef on weck sliders would be perfect served at your next homegating party, or even for the Superbowl. For more healthy football food, try parmesan-herb party pretzels, baked buffalo chicken taquitos, or hummus quesadillas.

What is Beef on Weck?

Beef on weck is a variation of a roast beef sandwich that’s popular in Buffalo, New York.u003cbru003e

Where can I buy the best Beef of Weck sandwich?

If you’re in Western New York, Charlie the Butcher is a must-visit! 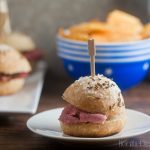