Last fall, the American Dairy Association & Dairy Council invited me to come out to the Finger Lakes and spend a weekend learning about the Dairy industry in New York State. Since I’m a proud supporter of local food (and a huge fan of cheese!) I decided to take them up on their offer. I ended up learning about dairy farming and it was a really eye-opening experience.  (Disclosure: My travel and accommodations were paid for the the ADADC.)

We started the day bright and early. at Cornell University… making ice cream! We made three different versions of black raspberry: one ice cream, one frozen yogurt, and one that was a 50-50 mix of the two. You could really taste the difference – the yogurt was super rich and tangy, while the ice cream was light and creamy. They were all good, but the ice cream was definitely my favorite.

I also learned a great shortcut: if you want to play around with making your own ice cream but don’t really feel like fussing with the custard base, just melt down some store-bought vanilla, add in whatever flavorings or mix-ins you want and then re-churn in. Kind of brilliant if you ask me – I can’t wait for the warmer weather so I can give it a try!

While our ice cream was freezing, we took a tour of Stocking Hall, which is home to the Cornell dairy facilities. The photos above are from the room where they process and bottle milk. I never realized it was so high-tech! (And total “duh” moment, but did you know that they process all of the milk as skim and then add the fat back in to make 1% and 2%? I just assumed they took out different percentages of cream, but adding it back in makes so much more sense.)

At Cornell, thy spend a ton of time and energy working with food companies to perfect the manufacturing and packaging processes so food stays at its best quality for a long time. Food freshness is one of those things that I’ve always just taken for granted, so it was really interesting to see how much thought and experimentation goes into it. 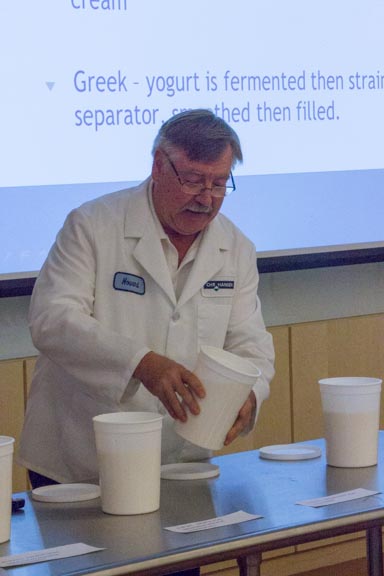 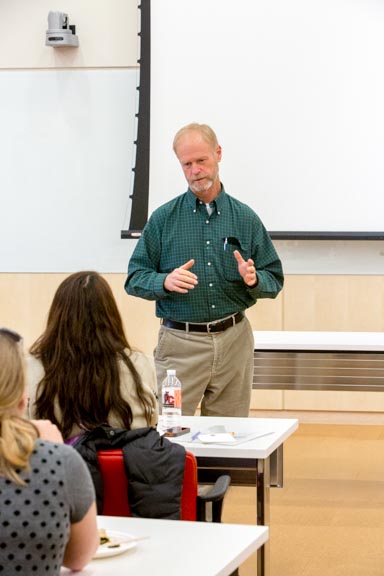 Next, we headed into a classroom for a few lectures. First, we learned about yogurt production and the way various types of yogurts are made – did you know NYS is the #1 producer of Greek yogurt in the world? You can thank Chobani for that. We also learned about a pilot program that Wegman’s is trying out to help small, artisan cheese companies get into grocery stores, and a dairy farmer spoke to us about how his farm operates.

My favorite part of the day was a lunchtime lecture by David Just, an associate professor from the school of applied economics and management, about behavioral economics in food choices and the smarter lunchrooms movement. I know it sounds terribly dry, but I promise it was anything but! It was basically about how we can use what we know about the way people (mostly kids in school cafeterias) behave to “trick” them into making healthier choices.

They also found that changing the way foods were presented on the buffet line, like giving healthy items “fun” names and placing them in positions that are easier to reach, has an impact on what choices students made. The one that stuck we me the most was the the kids were much more likely to take a piece of fruit when it was presented in a pretty bowl instead of in a plastic bin. It’s so simple, but it really does work. I know that I’m much more likely to reach for a piece of fruit for a snack when it’s in a nice bowl on my table instead of tucked away in the fridge.

The study that I found the most surprising (and yet not surprising at all) was that at an all-you-can-eat pizza, people who didn’t like the food ate the equivalent of half a slice of pizza more than people who liked the food. Why? They were trying to get their money’s worth and felt more satisfied with better food! (It’s why I think diets always fail so miserably. “Diet food” is gross! Give me one really good cookie instead of 3 that taste like dirt.)

I could go on about this lecture for pages, but I’ll spare you the rest. It’s seriously fascinating stuff though, and I’ve found myself bringing it up over and over again in everyday conversation. 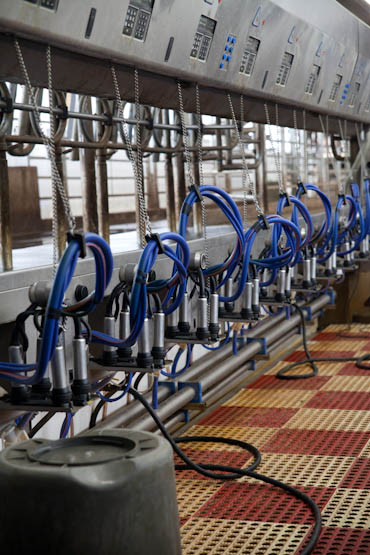 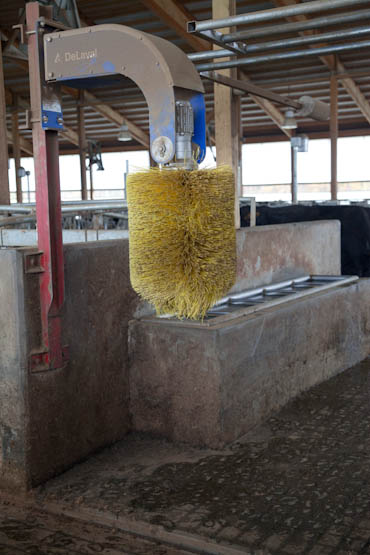 After lunch, we headed off to Cornell’s dairy barns to see everything up close and personal. I grew up in a pretty rural area with a lot of family farms, so this barn really surprised me. It was so high tech and industrial!

They made us put boot covers on, but honestly the barn was really clean. It didn’t smell bad at all (just a little like fresh cheese) and I didn’t see a single fly. They explained that the barns are  designed in a way that keeps the air circulating, which is good for ventilation and also prevents flies from landing because the air moves to quickly. Since happy, comfortable cows produce more milk, there’s a big emphasis on cow comfort, like the back scratcher you see in the photo above. When a cow butts up against it, it spins and scratches them (I could use one of those for that annoying spot in between my shoulders…) They also fill the cows stalls with sand that they can nestle down into. Other barns use waterbeds to keep the pressure off of the cows joints. 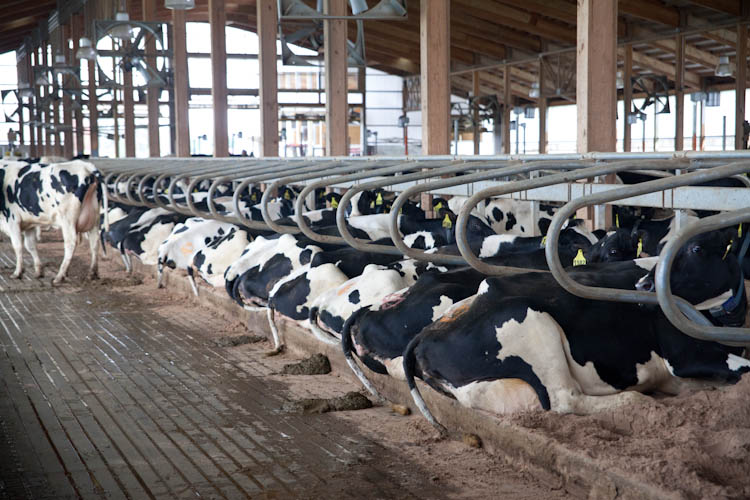 Not everything I saw made me happy though. With the family farms I’m used to seeing back home, the cows were always outside in the grass; these cows were free to wander around the barn, but they weren’t allowed outside. There was also no grass for them, since their feed is highly regulated to maximize the amount of milk they produce.

Since cows only produce milk when they’re pregnant/nursing, they’re bred right away and kept that way pretty much their whole (short) life. They’re also immediately separated from their calves after they give birth. Since younger cows produce more milk, they’re only bred two or three times before they’re sold off to the butcher in order to make room for a new lot. The farmers kept insisting that we needed to stop thinking about them as if they were people, since they don’t have emotions, but that was still a little difficult to process.

Overall though, it was a really interesting trip and I definitely enjoyed learning more about this industry! 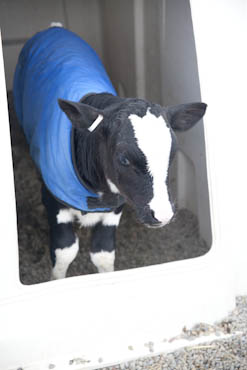 (Isn’t this little gal the cutest?! She was just about 3 days old and she was so tiny and cuddly. She also gave great little cow kisses. Totally makes me want a pet cow.)