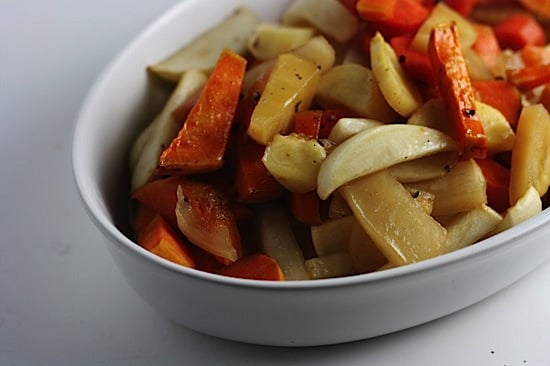 I’ve never been a vegetable person. I have my favorites (ahem… brussels sprouts), but in general they aren’t something that I get excited about. Especially when it comes to vegetable side dishes, where they don’t get to hide behind other flavors. But these maple-glazed root vegetables are another story: they can be enjoyed just as much by the veggie-hater as the veggie-lover. I made these to go along with steak and french fries – at the end of dinner, my plate still had steak and french fries on it, but there were no vegetables left. I was so excited about them that I made them again right away, to bring for lunch the next day. It’s amazing what a little bit of maple syrup can do. (Edit: I was reminded in the comments that I actually do like vegetables – in the summer, when they are in season and have flavor, I can’t get enough. But this time of year? Not so much.) 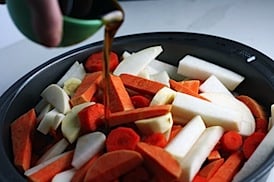 That’s not to say that these vegetables are super sticky sweet – the syrup really only forms a light glaze that imparts a hint of maple flavor while keeping the vegetables from drying out while they roast. Be sure to use real maple syrup on these, rather than “maple flavored syrup” (like Aunt Jemima and the other popular brands) that have corn syrup as their first ingredient. Real maple syrup has a lot less sugar, and a slightly bitter taste that takes some getting used to on your pancakes, but it a perfect foil to the natural sweetness of the root vegetables and to the peppery flavor of the parsnip and turnip.

You can use whatever winter root vegetables are available or whatever you like. I used sweet potato, carrots, parsnip, and turnip – but feel free to leave any one of those out or add another vegetable of your choice. When I make these again I want to try adding fennel, which I think will be fabulous. I also want to play around with adding some beets (probably not with the carrots and sweet potato though). It’s all about figuring out which vegetables you like best and going with it. 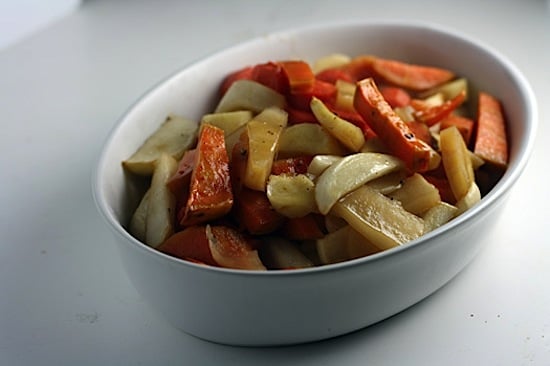 Heat oven to 400. Place your vegetables into a small pan (I used a 9-inch cake pan, but a small casserole dish would work just as well). Drizzle with maple syrup and toss gently to combine. Cut the butte into very small pieces and sprinkle over the top. Season with pepper.

Roast the vegetables for 30 minutes or until they can easily be pierces by a fork.