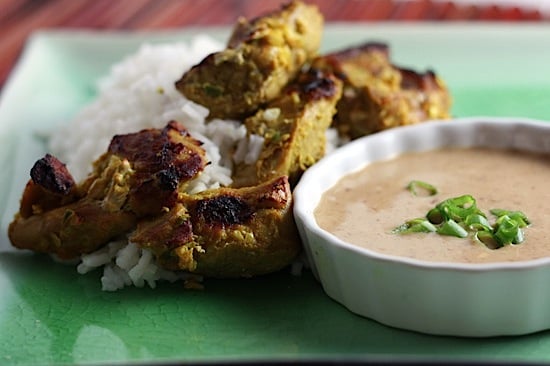 It seems like on the 13th of every month you can find me scrambling around in the kitchen rushing to finish the Daring Cooks challenge. I don’t know why I always procrastinate! I was especially excited for this month’s challenge too, so I really had no reason to put it off. You see, this month we made satay. Pork satay. Pork satay with Peanut Sauce. Yeah.

I love peanut sauce. Although I rarely order satay when we go out, I always consider it. All because I want that peanut sauce! Unfortunately, the chicken that they pair it with never seems worth it, and I wind up getting something else. But now, thanks to Daring Cooks, I can have peanut sauce whenever I want! I’ve tried to make it at home before, but it never came out right – it was always too sweet, and too thick. Apparently the trick is using coconut milk, lemon juice, and some random spices. The sauce is light and smooth, with a slightly sweet flavor and a little bit of spice at the end. Perfect. And the pork? So much better than chicken. Although if you don’t eat pork, I’m sure chicken would work just as well in this recipe. 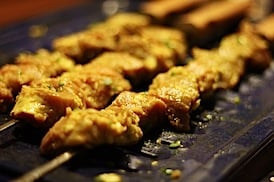 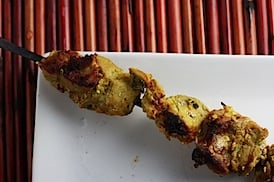 Satay is often served as “street fare” all over the world – it involves skewered meat that gets dipped into sauce. This has many incarnations – from traditional thai satays to Middle Eastern kabobs to the all-American corn dog. The meat (or tofu, if you prefer) can be grilled, broiled, or cooked in a pan. I chose to broil this recipe in order to get some char on my pork (it’s way too cold out to grill!).

The required part of this month’s challenge was to use a marinade. Marinades are often used to tenderize tougher cut of meat, while imparting loads of flavor. Marinades can take many forms, but always include an acid (like lemon juice or vinegar), and an oil. Very similar to a dressing – in fact, dressings work very well as marinades!

I served my satay with rice and Roasted Brussels Sprouts with Ponzu. 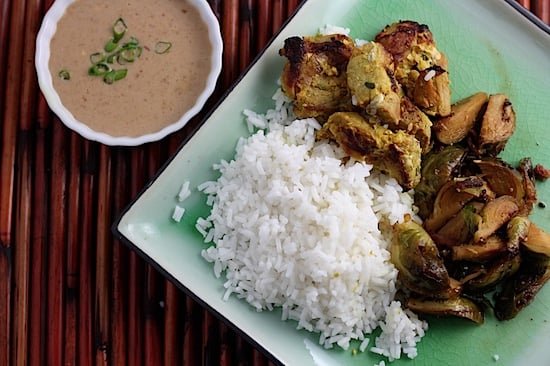 Combine all of the above ingredients – except the pork – in a food processor. Pulse 5 or 6 times until a paste is formed. This is your marinade.

Cut pork into 1-inch pieces. Combine with marinade. Cover and refrigerate at least 4 and up to 24 hours. Slide meat onto skewers. Broil for 10 minutes or until the edges just begin to char, turning halfway through. Serve with peanut sauce (below).

For the peanut sauce:

Combine all ingredients in a small saucepan. Heat gently, stirring occasionally, until the peanut butter has melted (this won’t take more than 5 minutes). Stir well to incorporate everything. This sauce can be made ahead and reheated, or can be made while the satay cooks.

The January 2010 DC challenge was hosted by Cuppy of Cuppylicious and she chose a delicious Thai-inspired recipe for Pork Satay from the book 1000 Recipes by Martha Day.

I recently appeared on the Kickback Kook’s food podcast, where I had the opportunity to make Chef Tonni Hinojosa‘s recipe for pork loin with apple barbeque sauce. Another girl and I discussed the recipe with Chef Tonni (unfortunately, I don’t think he was very happy with what we had to say – oops!). The podcast is available on iTunes. Anyway, the pork I used in this recipe was leftover from the piece that I bought for that (I froze what I didn’t use.) 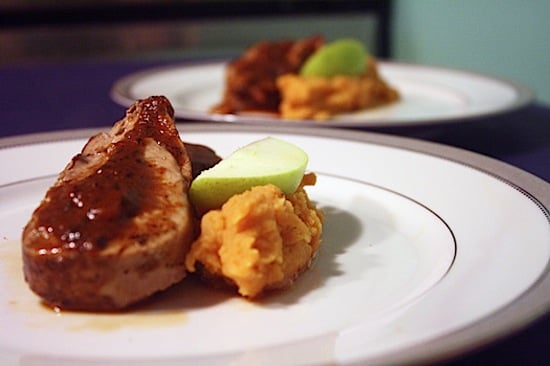