This healthy chicken and chorizo paella recipe is ready in just 30 minutes! Chorizo and fire roasted tomatoes give it tons of flavor, and everything cooks together in one pan for easy cleanup.

I always thought that I didn’t like paella, but that was only because I never had a good paella before.

The versions I’d tasted were always dried out and flavorless. Then, a few years ago, I attended an event called the Big Summer Potluck where Pam from Three Many Cooks made the most delicious paella I’ve ever tasted. And I fell in love.

Despite being simpler than most paellas (no seafood!) it was full of flavor. The bottom layer of rice was crisp, but it wasn’t dried out at all.

Weeks later, I found myself craving it and I knew that I would have to learn to make it in my own kitchen.

Since I loved Pam’s version so much, I used the recipe from her book Perfect One Dish Dinners as a starting off point for my own healthy paella recipe. The result was exactly what I was looking for, and it couldn’t have been easier to make. Since this summer, paella has become a weeknight staple in my house and, for the first time, we’re both happy with it.

This easy recipe is just as perfect on weeknights as is is for special occasions!

Traditionally, authentic paella is made with calasparra or bomba rice because of their ability to absorb lots of liquid but arborio rice, which is easier to find, does the job just as well. Short grain brown rice can also be used to add more fiber and a nuttier flavor, but you’ll need to adjust the cooking time.

I add chorizo to the pot while the rice cooks to infuse tons of flavor into every last bite. Chorizo is full of flavor, so a little bit goes a long way! A pinch of smoked paprika and some saffron round out the traditional flavor profile.

I kept this paella recipe simple with red bell peppers and peas, but you can bulk it up with all sorts of vegetables. I love adding a can of quartered artichoke hearts and chopped fresh green beans, but you can use whatever vegetables you have on hand. This is a great recipe to help clean out the fridge!

I used fire roasted tomatoes to add another dimension of smoky flavor to this healthy paella recipe. Finishing it off with lemon juice brightens the dish up and prevents the flavors from feeling heavy or muddy.

How do I make paella?

Season the chicken with paprika, oregano, salt, and pepper.

Set a large, deep skillet over medium-high heat. No need to get fancy with a special paella pan!

When the pan is hot, add the oil. Add the chicken and cook, stirring occasionally, until cooked through, about 5 minutes. Remove the chicken from the pan and set aside.

Add the chorizo, onion, pepper, and garlic to the pan. Cook until sausage has browned and vegetables have softened, about 5 minutes.

Bring to a simmer, then cover and cook for 15-20 minutes, or until most of the liquid has absorbed and the rice is soft.

Stir in the cooked chicken and peas. Cook for another 1-2 minutes, until warmed through. Remove from heat and stir in the lemon juice. Season to taste with salt and pepper. Let stand for another minute or two before serving.

What is paella and what is typically in it?

Paella is a classic Spanish rice dish that is made with short grain rice, saffron, veggies, chicken and sometimes even seafood all made and served in the same pan! The rice that comes in contact with the bottom of the pan gets toasty and crisp (fun fact: it’s called “socarrat”) and it topped with fluffy and flavorful rice.

Smoky chorizo adds a ton of flavor to paella! However, if you don’t care for chorizo or can’t find dried chorizo in your local grocery store, you can omit it entirely from the recipe.

Saffron can be pricey and is sometimes hard to find. You can substitute turmeric in place on the saffron if necessary. But, the saffron does give the paella it’s flavor. I’ve has great luck finding affordable options at Trader Joes as well as from Badia (found near the Mexican foods in most major grocery stores).

Is there a difference between Mexican Chorizo and Spanish Chorizo?

Two different sausages. Two different countries. Two very distinct flavors. While both sausages share many common ingredients, but they are prepared differently and that is what sets these two sausages apart.

Spanish Chorizo is typically used in cooking to enhance its flavors with other ingredients like rice, sandwiches , and on top of pizza or as an appetizer or snack. Mexican Chorizo, on the other hand, serves more as a primary source of protein and can often be found tucked inside tacos or burritos.

If you love rice dishes like paella, you should also try this Catalan rice with cuttlefish, mushrooms, and artichokes  (perfect for seafood lovers!) or this saffron risotto with roast salmon. For a more traditional seafood paella, try this recipe. 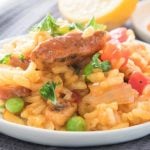 This recipe was first published in December 2011 and was updated in November 2021. The original photos are below!