Shredded chicken enchiladas covered in a mildly spicy, creamy poblano sauce. Make plenty, because they’re even better the next day! 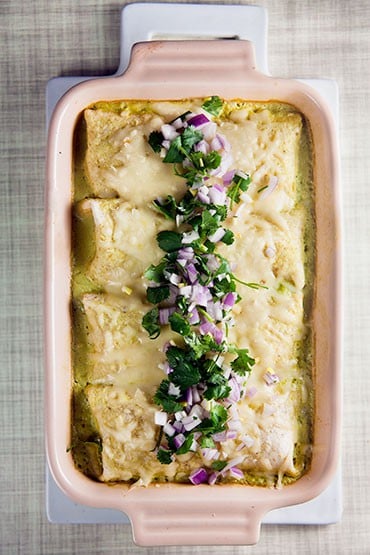 Remember that time I gave away a Vitamix blender, despite not actually owning one myself? Well, the nice people at Vitamix saw my post and decided that they should remedy that situation. They sent me my very own Vitamix 5200, along with the challenge of using it in healthy recipes every day for a week so that I could get used to it and learn how versatile it is. I’ve had it for about two weeks now, and I’m definitely loving it! Even reading through the cookbook that it came with was exciting – there are so many things that this little machine can do, it almost feels like it’s straight out of The Jetsons or something. I’ve found myself reaching for it way more often than I ever imagined I would. (For example, all those onions I wrote about over the weekend? They’re chopped up and packed away neatly in my freezer, where they’re taking up far less space.)

This week, I thought I’d share a few of the recipes that I made last week. Don’t worry – you don’t need a Vitamix to make them yourself, a regular blender or food processor will work, too (there might be a few tweaks needed, but I’ll make sure to point them out in the recipes.) 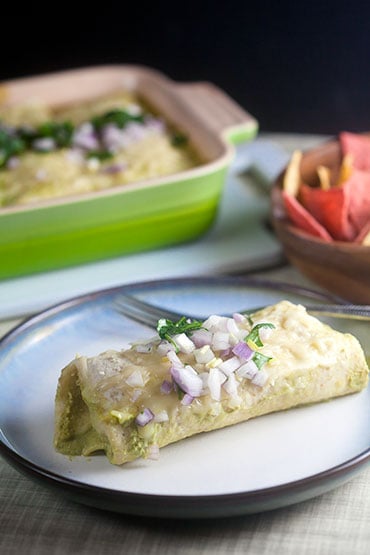 After breaking the blender in with a batch of frozen margaritas, I settled down and decided to make some actual food. These enchiladas covered in a mildly spicy, creamy poblano sauce, were inspired by some that I recently had at a restaurant. The sauce whips up easily in the blender while the chicken cooks on the stove, then it gets popped into the oven just long enough to melt some cheese on top. I was really excited by the idea that the Vitamix is so powerful that it can heat food up, so I used it to get my sauce piping hot. Since most blenders won’t be able to do that, you can transfer the sauce to a pot and heat it up on the stove, or add another 15-20 minutes to the baking time to ensure that the sauce is heated through.

(Speaking of being able to make things hot, if you have a Vitamix and haven’t made hot chocolate in it yet, what are you waiting for?! I’ve been making this Vitamix hot chocolate from Nutmeg Nanny just about every night. It’s so delicious, and even skim milks ends up getting a super frothy cappuccino-like foam on top.) 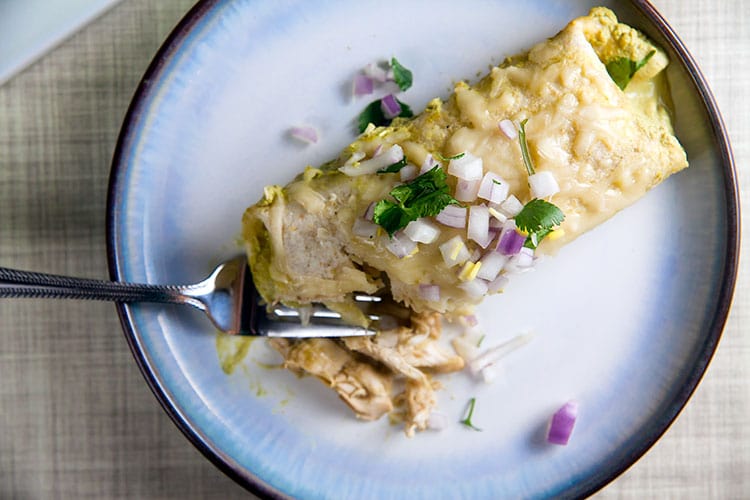 For the Poblano Sauce