You are here: Home / Uncategorized / Vietnamese Summer Rolls with Sausage 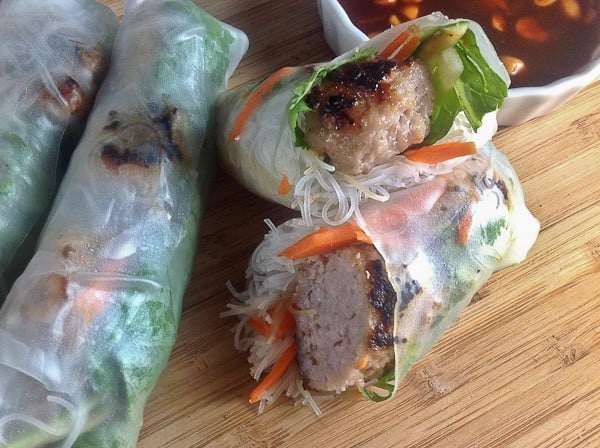 A casual Vietnamese restaurant, Pho Yum, opened not too far from us just about a year ago. It’s a nice spot for a quick lunch. It’s also (as far as I know) the only place in the area to get banh mi. Really though, we go for the summer rolls with nem nuong (grilled pork sausage). It’s the kind of dish that immediately puts a smile on your face and makes you relax in your chair. The sausage is delicate and has a subtle sweetness that’s unlike anything else I’ve had. We split an order every time we go; every single time, I say that I need to get around to making them at home. (I finally did, only to find that my camera battery had died. The photos in this post were taken with my phone.)

Summer rolls are the perfect light meal in this stifling heat. They’re similar to Chinese egg rolls/spring rolls, but are eaten raw instead of fried. They’re stuffed with thin noodles, fresh herbs, raw vegetables, and, optionally, a (cooked) protein like shrimp or sausage.

In my attempt to recreate the restaurant version, I made my own sausage. A google search resulted in tons of recipes, so I mixed and matched to get something that seemed right. The sausages themselves were really easy to make and tasted phenomenal. My version was a little milder than what I had originally hoped for, but I’ll definitely make them again.

The assembly of the spring rolls themselves, on the other hand, is kind of a pain in the butt. It’s easy enough to do, but kind of time-consuming. It’s definitely a good idea to recruit someone to help assemble them. Or, serve this dinner “taco night style” by settling out the individual components and letting everyone put together their own plate. 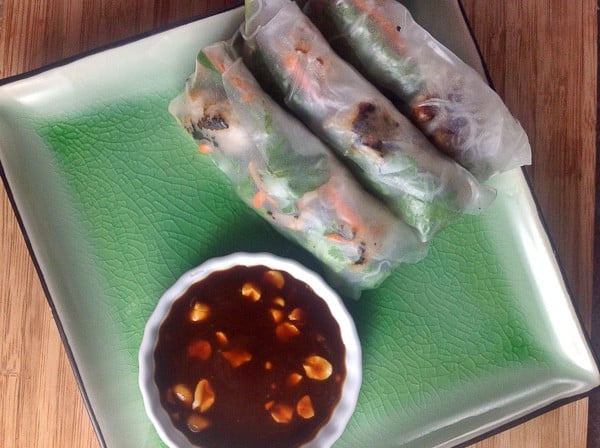