That’s all I can say. Thank you so much to Bertolli Sauce and Foodbuzz for this incredible experience! I had the best weekend – full of wonderful new friends, amazing opportunities, and delicious food. The entire weekend was surreal and I had a blast!!

The weekend was so jam-packed that I can’t even imagine trying to fit it all into one blog post. But since I really want to share the experience with you all, I’ll do my best. 🙂 This post is pretty heavy on the photos, but tons more can be found HERE (These are from the whole weekend, so not all of them are food shots – there are a few around the city and some from Sacramento).

I arrived in San Francisco Friday afternoon for an orientation meeting with the other Bertolli Sauces team and the other presenters: Chrystal and Amir (from The Duo Dishes) and Mardi (from Eat Live Travel Write). I can’t imagine a better group of bloggers for this. They were all awesome and their dishes ROCKED. I’m very happy to be able to call them my friends. I was extremely nervous about doing my demo, but the Bertolli team made me feel right at home. 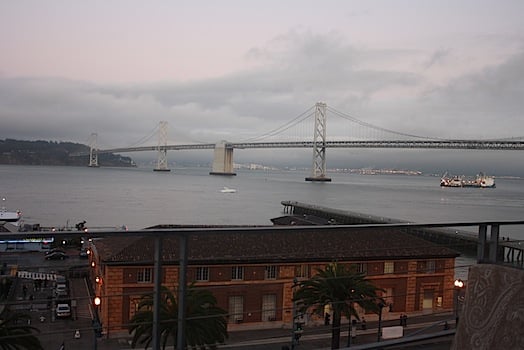 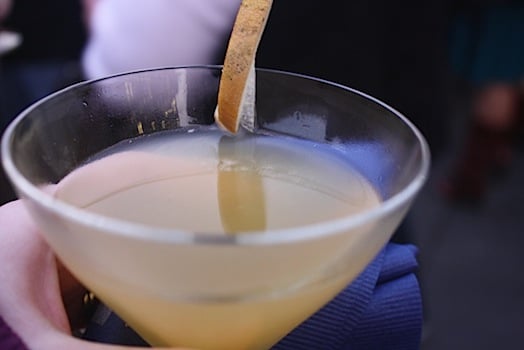 After getting oriented, we headed up to a cocktail reception on the roof of Hotel Vitale. The view of the bridge and the Ferry Building was breathtaking! We sampled some cocktails presented by Skyy and snacked on some cheese and bacon gougres. I was also really happy to run into Kelly from Evil Shenanigans. She is an absolute doll!

After a bit, we headed across the street to the Ferry Building for a “Street Food Fare” which was such a fun idea for an event! There were samples of all different San Francisco street foods along with some local beer and more cocktails. Everything was sooooo good! I couldn’t pick a favorite, but I think it was either the Potato and Chorizo Taco from Tacolicious or the porchetta sandwich from Rolli Roti (this sandwich was beyond ridiculous – pork loin wrapped in pork belly cooked on a spit until it was crispy, then served on a roll with cilantro and crispy pig skin. Served with potatoes that were roasted under the spit to catch the drippings before they were tossed with more crispy pig skin). 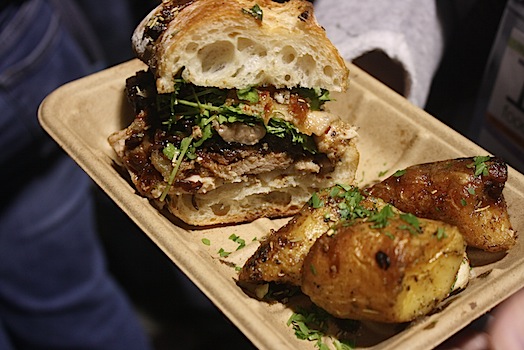 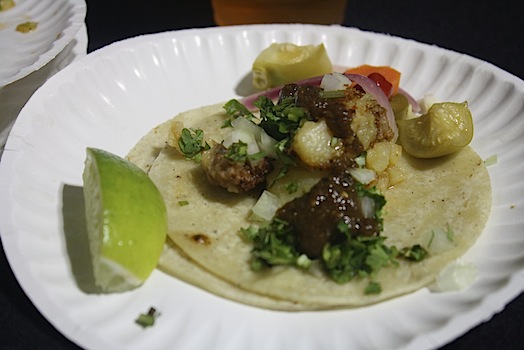 I also had my first ever raw, vegan dishes – a coconut cheesecake, and a flatbread with tomato from Alive. They were both surprisingly good! 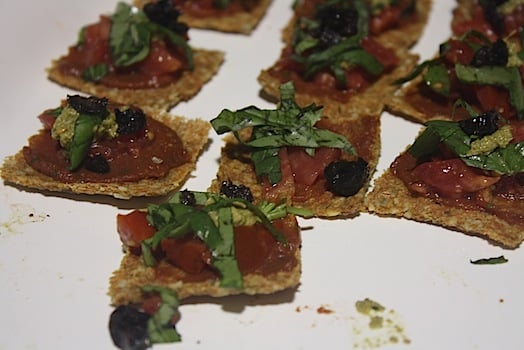 Raw oysters from Hog Island Oyster were by far the best I’ve ever had! 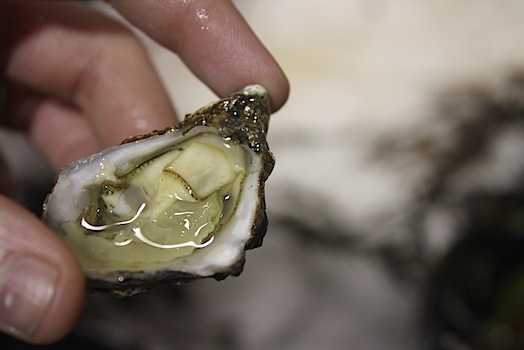 Because I was still on East Coast time, I was up bright and early on Saturday morning. I logged onto twitter to see if anyone else was awake, and it turned out that Mardi was too! We went over to the Ferry Building for coffee and then took a beautiful walk around the farmer’s market. The market was amazing – I’ve never seen anything like it! They had EVERYTHING! It also really amused me to see things like figs and pomegranate at a farmer’s market. Welcome to California! 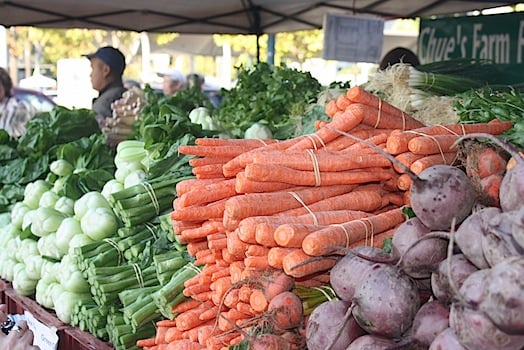 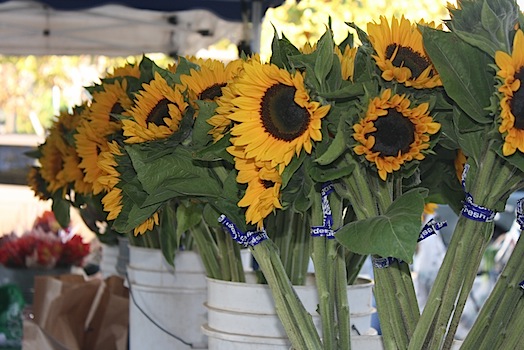 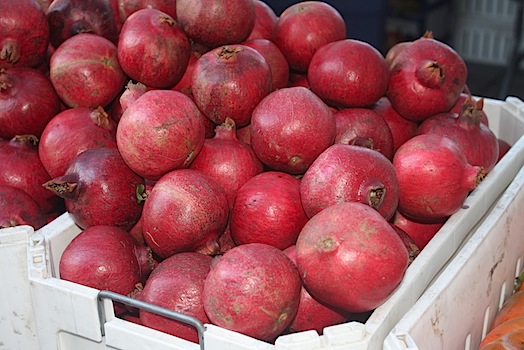 At 9:00 I headed back to the hotel for a Farm to Table discussion. We heard from a rancher and it was really interesting to me to hear about the farm to table movement from that side of the aisle. I never really thought about how difficult it must be for ranchers who want to sell grass-fed, humanely treated beef while continuing to make a profit. After hearing from them, I’ve realized that if you’re looking to buy grass-fed, it really is worth the extra price. Not only does it cost them three times more to raise a cow tis way, but they also have trouble selling them. He said that they often get orders from restaurants for things like “a pallet of filets” – but each cow only produces so much filet, so that’ a LOT of cows. And every cow yields about 100 pounds of steak and 300 pounds of ground beef – which noone ever wants. He was talking about how since change comes slowly, they’re trying to get kids to eat grass fed by getting it into schools, but they’re running into problems with governmental regulations. The whole discussion was very interesting really made me thing about a lot of things. I really want to see what I more I can do to support this industry.

After grabbing breakfast at the Ferry Building and wandering around a little more, it was time to head over to the Tasting Pavillion! This is where I was doing my demo, so I was starting to get REALLY nervous. But they made us feel right at home, and it was pretty cool to get to go into the kitchen to see the chefs preparing our recipes! Although I prepared some on the stage, the chefs prepared a massive amount so that everyone would be able to have a taste. It was completely surreal to see them preparing MY recipe in such a professional setting. 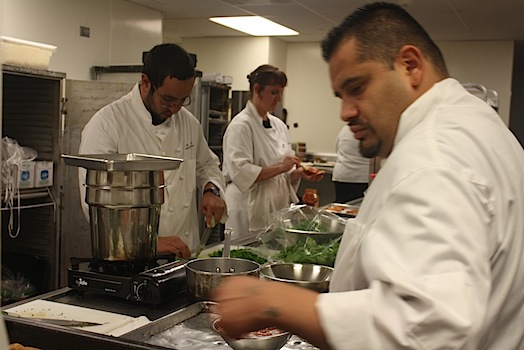 Since I was up last for the demo, I spent a little bit of time exploring the different booths that were set up. I got to try tons of interesting products, and i met lots of really cool people. I love how friendly and down to earth everyone was!

I was also signed up for a sparkling wine tasting, which was pretty cool. I had small sips of each, but I didn’t want to have too much before doing my presentation (something told me that would be a bad idea!!). The tasting was done price-blind, with prices revealed to us at the end after we voted on which we liked the best. My favorite was the cheapest one!! I actually didn’t like the most expensive at all – it had no flavor. Most of the participants agreed. 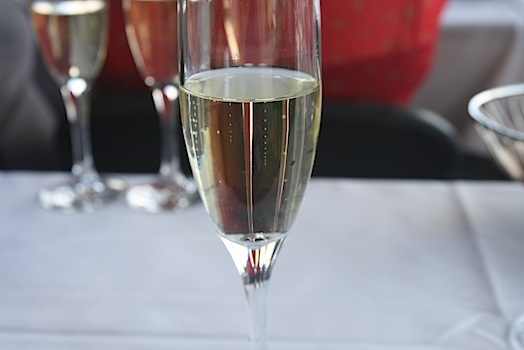 After watching the Duo Dishes and East Live Travel Write do their demos, it was time for mine! Despite battling nerves, it was actually really fun! I can’t thank Bertolli Sauces enough for letting me participate. And no one spit my samples out (at least that I could see!) so I’d consider it a success! (And seriously how cool is this setup that we had? The mirror overhead allowed everyone to see exactly what we were doing on the table. Brilliant) 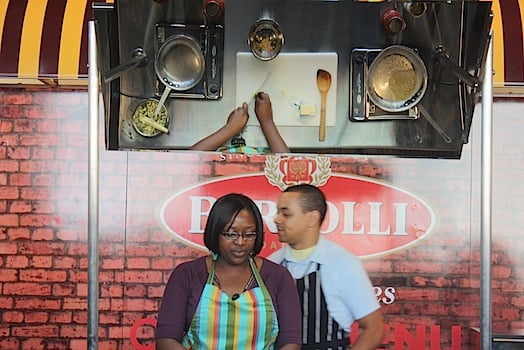 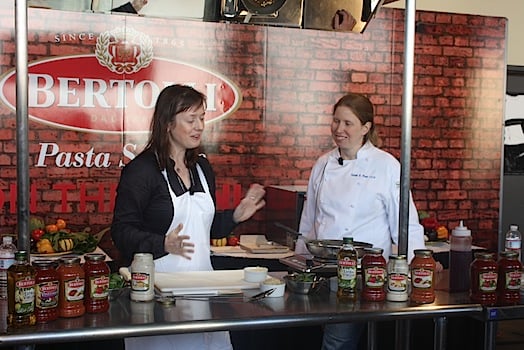 After my demo, I made one final swing around the pavillion to talk to some people and sample some more wine and a watermelon-wheat beer that was told couldn’t be missed. I was thankful for the recommendation – it was like nothing I’d ever had before and it was SO GOOD! I’ll be on the lookout for it locally.

Dinner on Saturday night was hosted by Outstanding in the Field and was held in the Greenleaf produce Warehouse, which was a really cool space. The entire dinner (and wine pairing!) was too good for words. Highlights for me included curry-crusted sea trout (which I had never had before but is a new favorite!) and Brussles Sprouts with beef cheeks and oxtail. 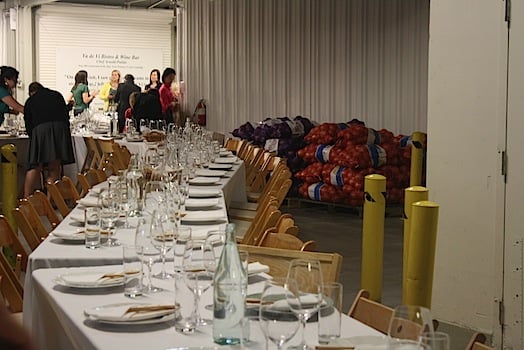 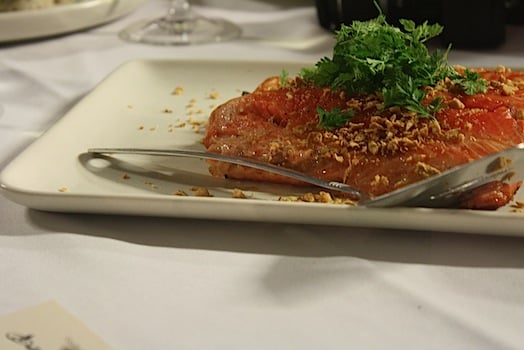 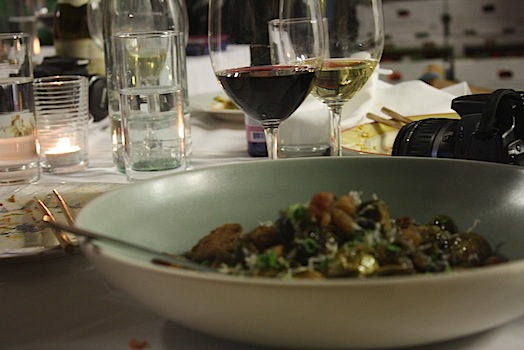 We sat at a table with Jesse from Beer and Nosh who brought a bottle of beer that he had made to share. What can I say? The man is a beer genius! It was incredible. He also won the award for Best Beer Blog later on in the night – an award that he completely deserved. If you don’t read his blog, you really should check it out, because he’s pretty awesome (he has some amazing food on there too, if you don’t love beer. I actually discovered it a while back when searching for duck hash).

Sadly, neither Kelly or Mardi won awards for their blogs. Andrea from High/Low Food/Drink, Natalie from Natalie’s Killer Cuisine, and I considered “pulling a Kanye” on their behalf, but we thought better of it. We drowned our sorrows with champaign at the hotel bar instead. 😉

Sunday was pretty low-key, but fun nonetheless. After packing and repacking my suitcases about 12 times before deciding that the only way that I was going to get everything home with me was to go buy another bag, we headed off to lunch at Restaurant Lulu. The brunch was hosted by Nature’s Pride, and they came up with some really creative ways to highlight their bread. My favorite was the French Toast topped with cinnamon butter and a pea-blueberry compote (the toast was made with a brand new Nutty Bread that actually won’t even be in store until next week!). I was also really excited to finally meet Jaden from Steamy Kitchen! She is absolutely adorable, and her new cookbook is stunning. After saying our goodbyes, it was time to go off an explore the city with my friend Allie from Fat Kid Who Loves Food. I had never been to San Francisco before, and she was a great tour guide. It’ a beautiful city, and I was sad when the weekend had to come to an end. 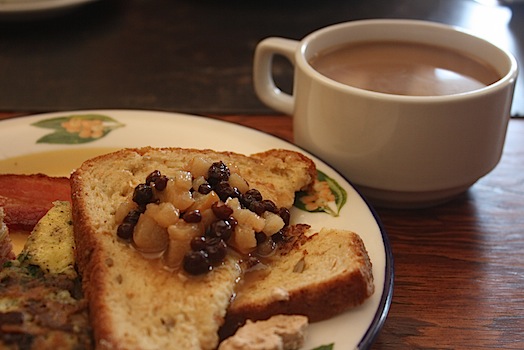 Over all, it was a fantastic experience, and I really recommend that everyone try to attend next year. Especially those of you who I know were there but that I was never able to track down (I’m looking at you Sophia and Jen!!)

And now, back to real life. I predict a lot of salads in my immediate future. 😉

PS- if anyone has any pictures of my demo or of my cioppino, would you mind sending them my way? I obviously wasn’t able to take any myself. I didn’t even get to taste my dish – hopefully the chef’s back stage did it justice! One of them tried some of the one I prepared up front and said he liked it better than what they prepared… but I don’t know if he was just saying that.

27 thoughts on “San Francisco and the Foodbuzz Blogger Festival”