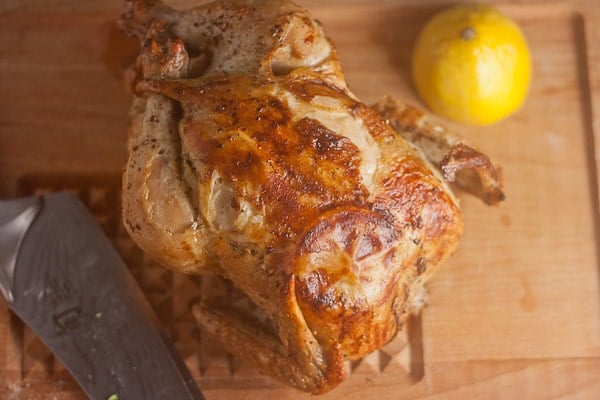 I recently finished reading the book Beaten, Seared and Sauced. Have you heard of it? It’s about a guy a decade or so older than I am who decides to upend his career and enroll in the Culinary Institute of America. The book wasn’t exactly what I thought it would be (I couldn’t relate to the narrator at all; he was kind of lame and he complained too much… which, funnily enough, sounds just like me) but it was still an enjoyable read and had some interesting insights into the life of a culinary student.

Mostly though, it left me craving roast chicken. 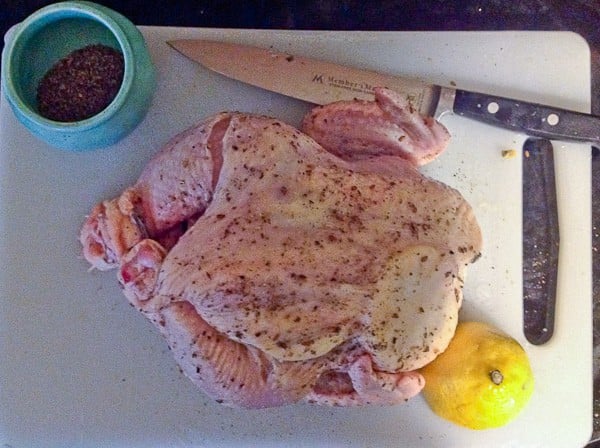 There’s a passage about three quarters of the way though the book where the author explains that many chefs cite roast chicken as their favorite meal. It surprised me – I figured they’d prefer something a little more adventurous or luxurious. Game, or truffles, or foie gras. But then he described the crisp, salty skin and tender meat that falls of the bone, and I was sold. He went on to explain his roasting method: blasting the bird with hot air to crisp the skin, elevating it on balls of foil so that the air circulates better, tipping out the accumulated juices to see if they ran clear. I reread that passage about 5 times, letting it soak soak in. The next thing I knew, I was at the store buying a chicken.

(The passage was beautiful and I wish I could post it here, but I didn’t think to copy it before the book went back to the library.) 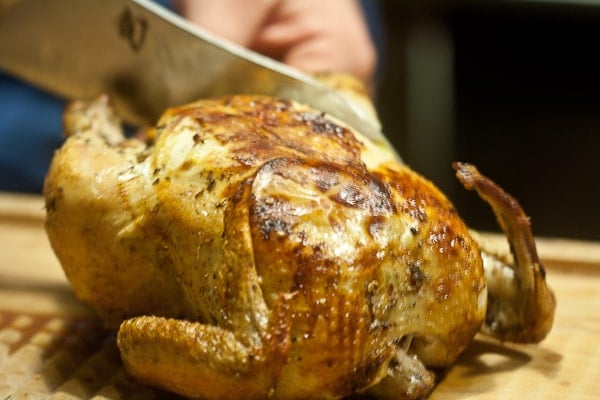 Although Dixon’s method was now ingrained in my memory, I couldn’t help but put my own spin on it – my method is a mash-up of his and the Zuni method, which involves flipping the chicken onto its breast while it roasts so that the juices flow into it and keep it moist. For good measure, I slipped a few slices of lemon under the skin and seasoned it generously with za’atar. The result? A perfect roast chicken with skin that crackled with the slightest touch and succulent meat that was like butter under my knife.  Made in under an hour.

It was easy to see why it would be so many chefs’ favorite meal.

I made these salads with the leftover chicken breast, and they were the best salads I’ve had in ages. I topped sweet mesclun with roast chicken, red seedless grapes, camembert, and small cubes of crusty bread, then drizzled it with a vinaigrette made from walnut oil, tarragon vinegar, dijon mustard, salt, and pepper. I think I could eat the salad every day! 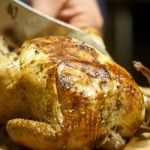 This method takes a little more attention than other roast ing methods – you’ll have to flip the chicken over twice – but it’s well worth the effort. Flipping the chicken has the effect of roasting it on a spit, distributing the juices throughout the meat and keeping the breast from drying out. You’ll also want to truss your chicken (bind its legs) and inset a lemon or onion into the cavity to prevent hot air from flowing into it and overcooking the breast. Check out this video for a tutorial on how to truss your chicken without twine or other material – it’s what I did here and thought it was genius. Za’atar, a Middle Eastern spice blend, is one of my favorite all purpose seasonings. You can use whatever you like though – herbs de provence is great, as is a simple rub of thyme, salt, and pepper. For an easy side dish, cut potatoes into a 1-inch dice and toss them with olive oil. Because of the high cooking heat, they’ll roast in about 30 minutes – put them in the oven the first time you flip the chicken and leave them in to finish cooking while the chicken rests.
5
Print Pin SaveSaved!
Prep Time: 10 minutes
Cook Time: 50 minutes
Total Time: 1 hour
Author: Lauren Keating
Prevent your screen from going dark