This one pan pasta with cajun spiced chicken, artichokes, spinach, and lemon is a quick and easy meal that’s perfect for busy weeknights.

Do you ever see a picture of something that looks good, only to realize it’s totally not what you thought it was? It happens to me all the time.

The other day I was flipping through a magazine and stopped on what I thought looked like a good cajun chicken pasta – except that it turned out that that isn’t what it was at all. It was casarecca pasta with roast artichokes and olives. Whoops!

I couldn’t get the idea of cajun chicken pasta out of my head, and the more I thought about it, the more adding artichokes seemed like a brilliant idea. Instead of making a spicy tomato sauce, I kept things light and fresh with a simple lemony sauce and plenty of artichokes and spinach.

The lighter flavors really compliment the cajun spiced chicken well. And that’s how this one pan cajun chicken and penne was born.

How to make One Pan Cajun Chicken Pasta

I didn’t feel like doing dishes or waiting for a giant pot of water to boil, so instead of boiling the pasta in one pot and cooking the chicken and vegetables in a second pot, I developed this recipe so everything can be cooked together. It’s fast, easy, and there’s less to clean up – what more can you want?

First, grab a big pan with a lid. You’ll want one that can hold the chicken, pasta, and about 4 cups of liquid. I used my deep 12-inch covered skillet, but you can also use a Dutch oven or stock pot. It’s definitely better to err on the side of slightly too big instead of too small.

I really like the way chicken comes out when I use this method. Start by seasoning it and searing it in hot oil. After it’s browned, you’ll add the pasta and plenty of flavorful liquid. The chicken poaches while the pasta cooks in the same pot. For this one pan cajun chicken pasta, I use a combination of chicken broth, lemon juice, and water. The cajun seasoning on the chicken infuses the liquid with even more flavor. Some of the liquid absorbs into the pasta and the rest cooks down into a nice sauce.

Depending on the brand of pasta you use, it will take between 18 and 22 minutes to cook through. Start checking it after 18 minutes and stir in the vegetables and lemon zest as soon as it’s al dente. It only takes a few minutes for the artichokes to warm though and the spinach to wilt, so the pasta shouldn’t overcook.

Season the pasta to taste with salt and pepper (a little sea salt really opens the flavors up) and serve it with lemon wedges and shaved parmesan. 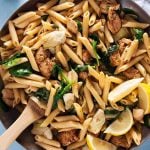 One Pan Cajun Chicken Pasta with Artichokes and Lemon

Prevent your screen from going dark