Skip to content
One Pan
No ratings yet
↓ Jump to Recipe 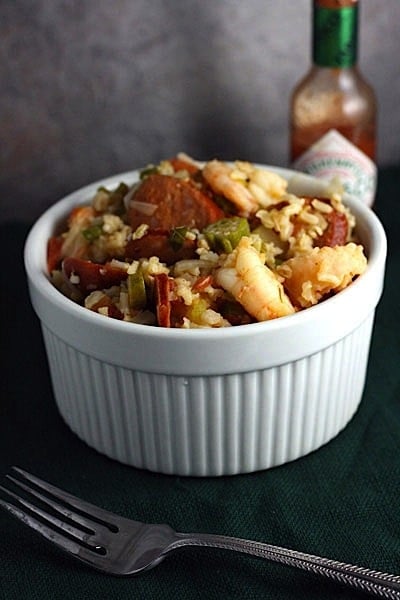 The other day, I was thinking about the way I used to eat. Back when I was in college and shortly after I graduated. Let’s just say it wasn’t very healthy or very delicious. Looking back, I think there was a period of time where I just completely forgot that I knew how to cook a decent meal. Plus, I couldn’t really be bothered. Like a lot of people, I had the misconception that cooking a real dinner out of real ingredients would be too expensive and take too much time. So we’d boil a box of pasta and mix it with a jar of sauce and some sausage. Or we’d try to be “healthy” and make a chicken stir-fry, but we would totally ruin it by using store-bought marinades that were loaded with sugar. For a special treat, we’d buy a box of zatarain’s mix and make jambalaya.

I don’t miss the other stuff at all, but I do kind of miss the jambalaya. And with Foodbuzz pledging to donate $25 to the Greater New Orleans Foundation (helping fishermen who were effected by the oil spill and their families) for every Gulf-Inspired post this weekend, it seemed like the perfect excuse to make it. Of course, I wasn’t going to resort to using a box – I know better than that now! (And a quick look at the back of the box confirmed my suspicions — 21% of your RDA of sodium? MSG? Sodium dioxide?? No thanks!) No, this jambalaya is 100% real food and 100% real flavor. Sure you have to spend a few minutes chopping vegetables, but other than that it really isn’t any more difficult or time consuming than the boxed stuff. And the final product is so much healthier and so much more delicious that there really isn’t any excuse to take “shortcuts”!

Question: Do/ have you ever relied on convenience foods? Do you think they’re worth it? I think they’re nice for those nights when I just don’t have the energy think about cooking at all, but now I try to make sure the ingredients are all real, recognizable foods. I don’t think they’re generally huge time-savers (there’s nothing they can do to make water boil any faster!) but I will admit that they do cut down on the energy you have to spend cooking and they require a lot less thought that starting with whole ingredients does.
Looking for more Gulf-inspired flavor? How about a nice, steamy bowl of gumbo? Gumbo is very similar to jambalaya, but it’s prepared as a soup enriched with a roux. In gumbo, the rice is cooked separately from the other ingredients and added in the final step instead of cooking along with everything else and absorbing all of the flavors. 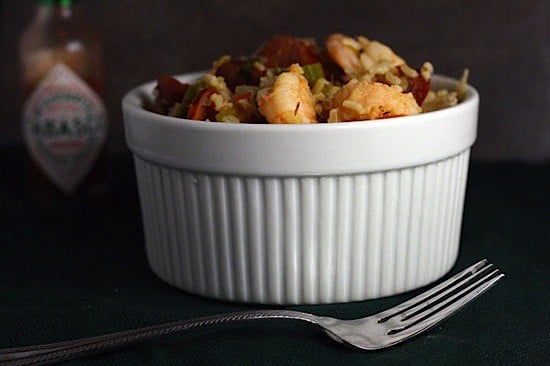 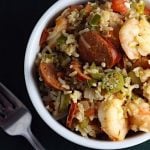 24 thoughts on “Cajun Jambalaya with Okra, Andouille and Shrimp”