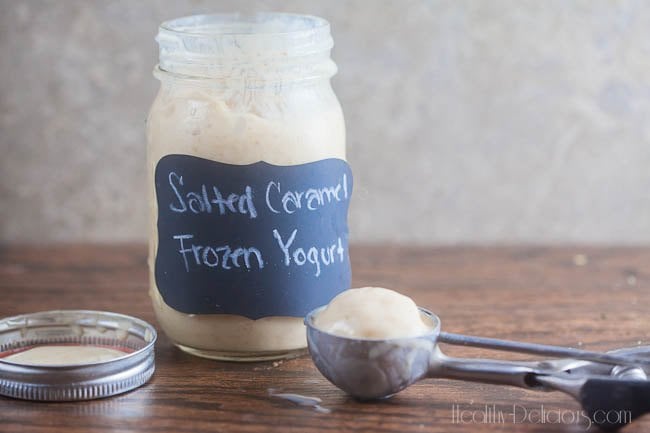 What better way to welcome the official start of summer than with homemade frozen yogurt? Especially when you don’t even need an ice cream machine to make it? This rich, creamy salted caramel frozen yogurt is made right in the mason jar that it’s served out of!

This week, Sunday Supper is hosting a dessert party in celebration of Shaina Olmanson’s book Desserts in Jars. I’ve had this book for a while (I think I picked it up at one of the conferences that I attended last year?), and it’s filled with really fun recipes from individual cakes and pies baked right in jars to unbaked mixes that makes great gifts to frozen treats like ice cream parfaits and granitas. (See below to learn how you can win a copy for yourself!) 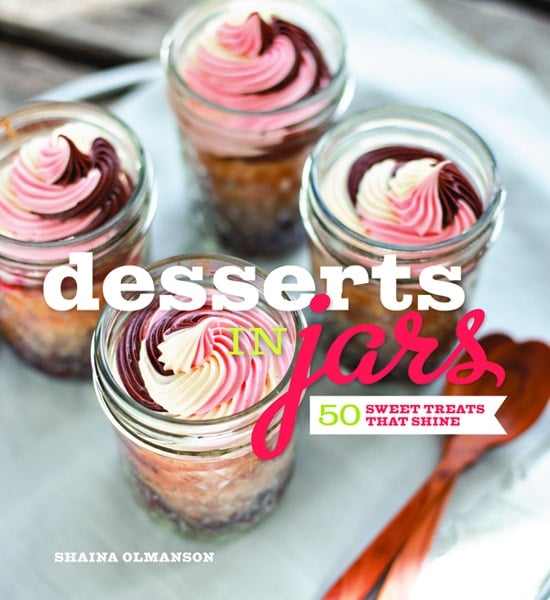 This recipe for frozen yogurt doesn’t come from the book, but it is inspired by the book. Here’s the thing: I have an ice cream maker, but I kind of hate it. It’s huge, and the bowl needs to be frozen for at least 8 hours before you use it. That’s kind of annoying when you want to make ice cream or frozen yogurt impulsively. Theoretically you could keep the bowl in the freezer and be good to go whenever, but that’s not practical for me – there’s just not enough room in there! When I was flipping through my copy of Desserts in Jars trying to come up with an idea for this week’s post, I remembered one day in kindergarten when we made ice cream in ziplock bags and I thought that the concept could b adapted for a mason jar.

There are two methods that you can use to freeze your yogurt here, an each have their own advantages and disadvantages. In the first method, you basically recreate an old-school crank style ice cream maker by placing the jar inside a larger vessel filled with ice and salt, then stir continually while the jar rapidly cools. This method produces the smoothest, silkiest frozen yogurt but it’s kind of a pain in the butt. I’m not going to lie, stirring the jar for a half hour gets pretty boring. The other method is to place the filled jar right into the freezer, taking it out and giving it a good shake or stir every half hour until the contents are frozen. This way is easier, but it takes a lot longer (plan for 3 or 4 hours) and the resulting dessert won’t be quite as creamy. 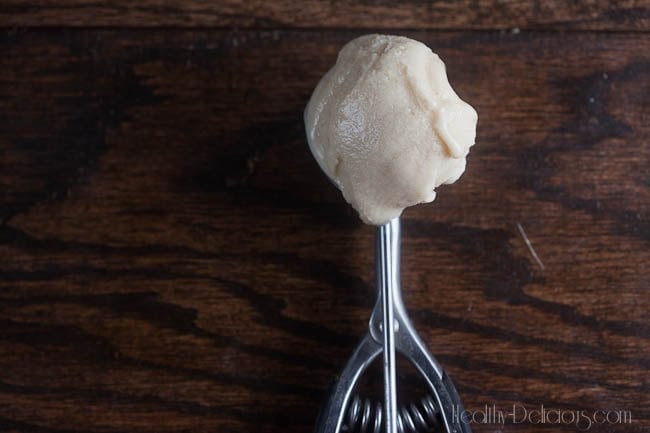 44 thoughts on “Salted Caramel Frozen Yogurt in a Jar”