A satisfying seafood stew based on the sunny flavors of Provence, France. 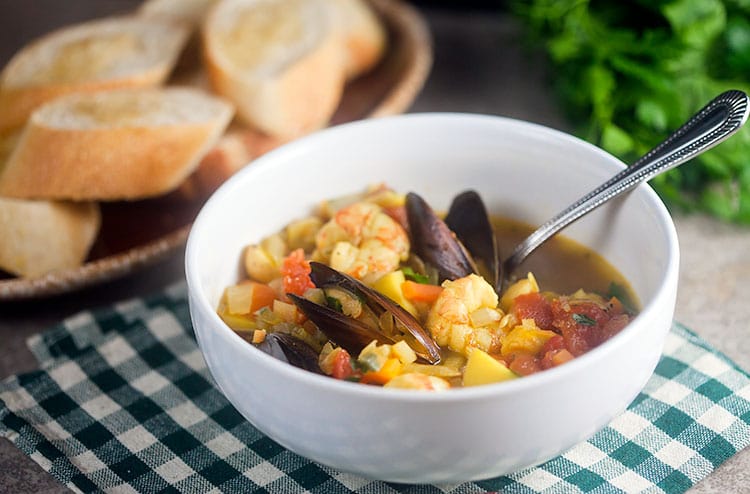 The #SundaySupper movement is turning 2 and this week we’re celebrating with a virtual birthday party! I only started participating in early 2013, but it’s one of my favorite blogging events – and has inspired a lot of my favorite recipes. I really love the groups focus on making sure families gather around the dinner table at least once a week.

This week, participants were asked to share a favorite #SundaySupper memory along with their recipe. I was stumped at first, but then I had two great ideas that I had a hard time choosing between! My favorite Sunday Supper memories from 2013 were the two times when I actually sat down and shared a meal with other Sunday Supper participants – once with Carla at the Big Summer Potluck and the second with Nikki and Courtney at Mixed. Both meals were memorable not only for their delicious food, but also for fun conversations and new/strengthened friendships. I ended up making my decision for today’s post based solely on the food. While the kimchi deviled eggs I shared with Carla were out of this world, I really wanted to make a complete meal. So, seafood stew it is! This recipe is based on the amazing bouillabaisse that we had at Mixed, but I dumbed it down a little to make it easier and more accessible (the version we ate there involved fennel pollen, and the only way I’ve ever been able to get ahold of that is by mail.)

This isn’t a traditional bouillabaisse at all, but it definitely gives a nod to the south of France in terms of flavor. Fennel, saffron, and orange zest make the broth nice and bright, while garlic toasts give the meal a rustic, earthy feel. I used a combination of shrimp, scallops, clams, and mussels in my stew, but you can use whatever you like or whatever happens to be on sale. (Using so many types of shellfish may seem indulgent, but you only need about a quarter pound of each so it’s not really that expensive. You can also use frozen seafood to cut costs even more – the shrimp, clams, and mussels I used came packaged together in a freezer bag.) 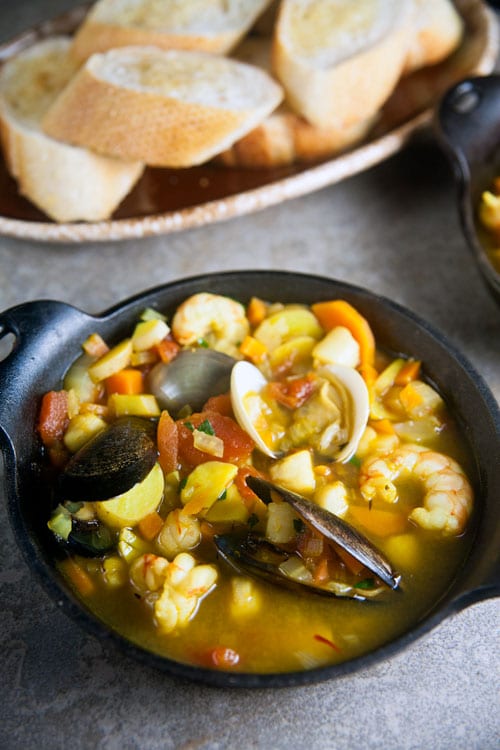 For the seafood stew:

For the garlic toasts:

To prepare the garlic toasts: