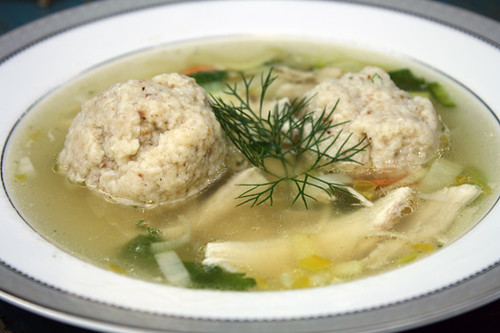 Last November, we went to NYC for a few days and I had an awesome bowl of matzo ball soup at the Manhattan Diner, which was across the street from our hotel.  I’m not normally the biggest fan of chicken soup, but it came free with my sandwich so I figured I’d give it a try. Much to my surprise, I didn’t only like it – I loved it! Ever since, I have had the occasional craving for matzo ball soup. I tried some premade stuff from the grocery store, but it wasn’t the same and I knew that I’d have to try making my own. This weekend was rainy and a little on the chilly side, so I decided it was the perfect soup weather.

Not too long ago, I was watching throw down and the theme was matzo ball soup! Perfect! I definitely picked up a few tricks from the episode – like using schmaltz (rendered chicken fat) in the matzo balls. Bobby Flay also threw a jalapeno in his broth, which I thought sounded like a good idea. I wasn’t going to do it myself at first, but I hada chili pepper left over from another recipe and at the last minute I decided to throw it in to cut through some of the richness. It was a really nice touch – for the most part it was undetectable, but then once in a while you would get a little bit of the heat. Very nice. 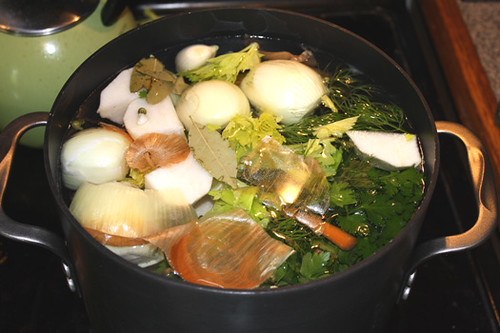 This is definitley a weekend meal since it involves making broth from scratch. I did it all in one day, but it would be best spread over two days. If you make the broth ahead, you can allow it to simmer all day and really get a nice flavor (mine could have used another hour of so). You can also cool it enough to skim the fat off the top (I only had time to chill mine for about 2 hours, so it didn’t fully serperate). The next day, you just have to add the veggies, reheat, and make the matzo balls. Easy! You’ll have plenty of leftovers with this one- it makes a lot! Store the matzo balls seperate from the soup and add them just before reheating- otherwise they will soak up too much broth and turn to mush.

Skim off the layer of fat that has risen to the top of the broth. Reserve 1/4 cup.

Make matzo balls: whisk eggs in a medium bowl. Add schmaltz, 1/4 cup broth, a little dill, salt, and pepper. Stir in matzo meal. Cover and refridgerate 30 minutes. Bring a medium poot of water to a boil. Form matzo dough into 16 1-inch balls. Drop one by one into boiling water and allow to simmer about 15 minutes or until doubled in size.

To serve, place 2 matzo balls in a bowl, then ladle in soup. Garnish with dill.