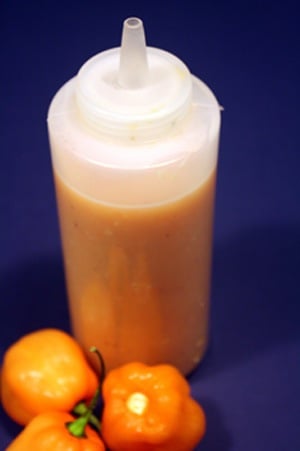 Last week I promised you a recipe for habanero hot sauce, but I ended up getting side-tracked by a few exciting (and top-secret) projects and didn’t have time to post it. But here you go! I made this sauce to go with the tamales that we had a few nights ago, but I’ve also used it in a few different ways since. It’s a great way to jazz up a frozen burrito, and its also pairs nicely with eggs. I’m planning to use it later this week in a squash hash as well. You might want to scale down the recipe a little – that’s a 12-ounce bottle you see up there – but this is a really nice condiment to keep around.

Remember a while back, when I made Dosas, I wrote about how my habanero plants were producing faster than I could use them? Well, since then they’ve really taken off! This recipe used about half the habs shown below… and in the week since I made it, my stock has been replenished and then some. We actually have a theory that they cross pollinated with the jalapenos that I had planted – we got about 4 jalapenos early in the season and each was bright red and fire-hot inside. Since then, no more jalapenos but more habaneros than I know what to do with. If you know of any recipes that use lots of these little guys, please pass them along. And if you want a few let me know and I’ll mail you some. Seriously. 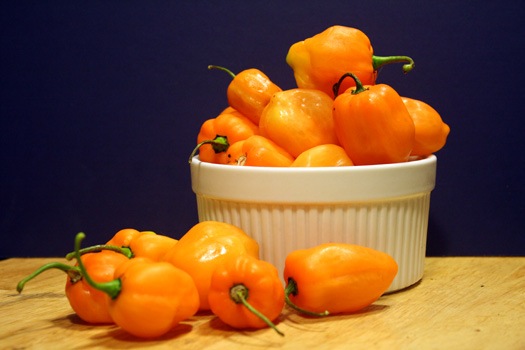 Anyway back to the sauce. I was looking for a way to use up some of these peppers, when Rick Bayless tweeted a recipe for habanero hot sauce. I immediately knew that I’d have to try it.

I have to warn you – this sauce is HOT. A few drops are all you need to get a nice, spicy flavor without killing your tastebuds. I’ve found that for me, about 4 drops is enough to flavor one plate to the point of being spicy without being overkill. More than that and you might feel like your mouth is on fire. (I was actually thinking of calling this “fire sauce” but that sounds too much like Taco Bell and ruins it. This is way better than anything you’d ever get at Taco Bell.) And “death sauce” sounded too extreme. I don’t want t scare you all away!

I was actually a little scared of this before I tried my first taste. I made the mistake of taking a big, deep smell while the hot mixture was still in my food processor. BAD IDEA. I immediately started coughing and sneezing from the heat. Once it cool down the flavors mellow but you’ll still want to be cautious until you learn how much you can handle.

I’m not an expert on food safety but from what I could find by googling, this should keep for at least 6 months in the refrigerator. It does separate a little when it sits though, so you’ll want to give it a good shake before using it. 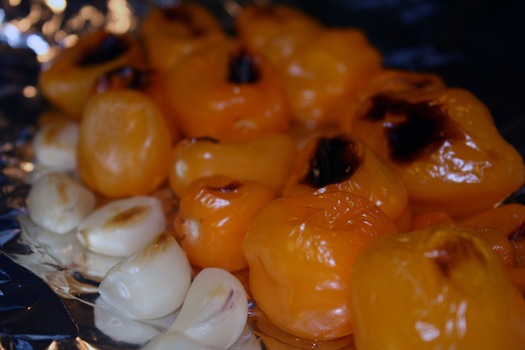