I feel like I’ve been posting an overabundance of desserts lately – that was definitely due to a very poorly planned editorial calendar for this month. I have a few more sweets planned for next week but I have some great savory recipes planned for early October. (And I promise, what I have in store for next week is definitely worth it!)

But for today, let’s eat soup. I took a quick facebook poll to see what people wanted me to post next and soup won by a landslide. I love that you all love soup as much as I do! This chicken tortilla soup is one of my new favorites. It’s rich, spicy, and super satisfying.

It’s also the easiest soup I’ve ever made. (Seriously, you might laugh when you see how easy it is compared to how delicious it is. I certainly did!) The trick is to use SALSA instead of tomatoes, onions, garlic, etc. It’s basically the best shortcut ever! The second trick is poaching the chicken right in the soup. It adds depth to the flavor of the store-bough broth and saves you from having to dirty a second pot. If your chicken is frozen, you don’t even need to worry about defrosting it first – just throw it right in.

(I haven’t mentioned it in a while, but I also write for the ShopRite Potluck blog. I originally created this recipe for them but since I love it so much I wanted to share it here too. Definitely check out the Potluck blog though too. There are some great recipes over there, including some that I don’t post here – like my chicken riggies and sauerbraten meatballs.) 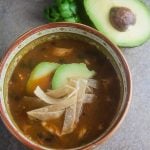 To make crispy tortillas for the top of your soup, cut 2 corn tortillas into thin strips, then cut in half crosswise. Heat 1 inch of vegetable oil in a heavy pot to 350*F. When the oil is hot, add the tortillas and cook for 2 minutes. Drain on paper towels. The tortillas will continue to crisp as they cool.
5
Print Pin SaveSaved!
Prep Time: 5 minutes
Cook Time: 25 minutes
Total Time: 30 minutes
Servings: 4
Calories: 393kcal
Author: Lauren Keating
Prevent your screen from going dark