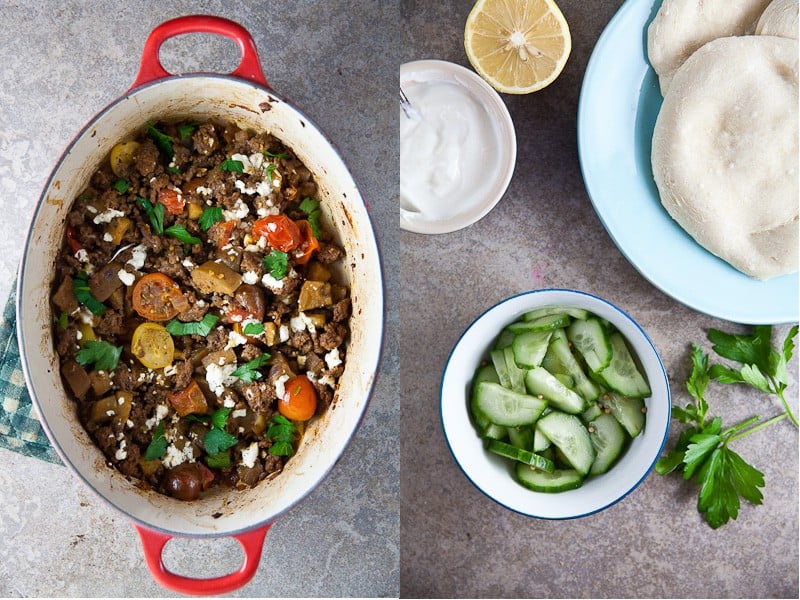 I’m so excited to finally share this braised eggplant with ground lamb with you all – I made it almost a whole month ago and I haven’t stopped thinking about it since!

The recipe came out of a craving for eggplant… for days, all I wanted was eggplant that was cooked until it was so tender that it collapsed in on itself. I had no idea what I wanted the rest of the meal to be, but once I got the image of that eggplant in my head I just couldn’t shake it. The end result – tender, braised eggplant and tomatoes cooked with richly spiced lamb and topped with cool yogurt sauce and tangy cucumbers – ended up being perfect and is one of my favorite meals of 2012.

I’ve been tempted to publish it a few times since then, but I really wanted to save it for my first post of 2013. 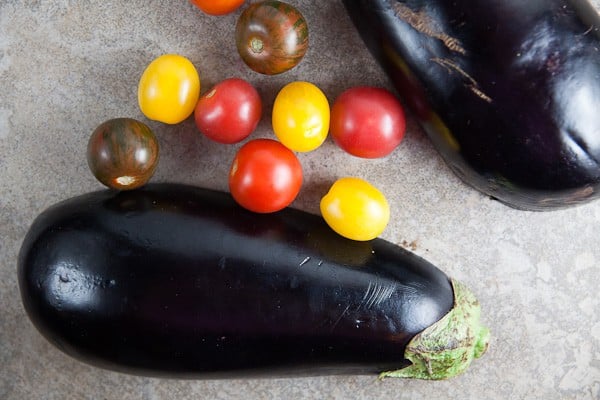 You may have seen sneak peeks of this recipe already – I’ve been using the image at the top as my Facebook cover photo and as my twitter background for a few weeks.

This recipe symbolizes everything that I want this blog to be this year: first, and most importantly, it’s absolutely delicious. It’s simple, but all of the components work together in harmony to create a thoroughly enjoyable meal. It was fun to cook, and to eat, as is one of those meals that reminds me how much I love being in the kitchen. 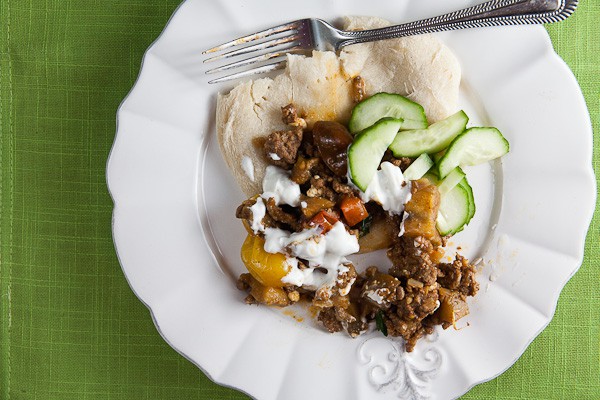 This is also one of the first (if not the very first, it’s easy to lose track) nights that I was brave enough to take my camera of AV mode and shoot in manual. I was incredibly inspired by Bree when she spoke about photography at Mixed earlier in the month, and took her advice of reading the book Understanding Exposure. This book makes everything about photography make so much sense! (Bree also took my new headshot, which I’m completely in love with!)

I’m still not finished with it, but it’s already made a huge difference in my photos. It takes me less time to get the shots that I want, so I have more time to play around and be creative with them. I’ve also been able to perfect them more in the camera, so I spend less time processing them on the computer – just a few small tweaks and they’re good to go! I’m really proud of all the photos I took last month and I’m excited to learn more. 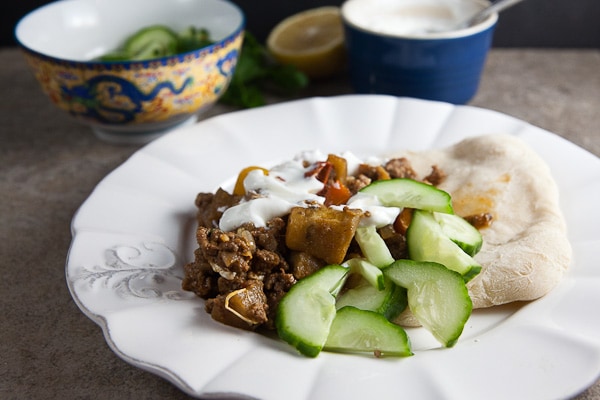 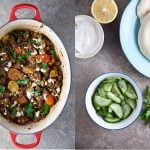 Braised Eggplant with Ground Lamb Ras El Hanout is one of my favorite spice blends. It's warm and earthy, with cinnamon, cumin, ginger, and turmeric and I especially love it with lamb. In fact, I can't remember the last time I made lamb without it! It used to be difficult to find, but now that McCormick makes a blend it can be found in most grocery stores. Instead of making tzatziki to go with the lamb, I made a simple yogurt sauce and did a quick pickle with some English cucumber and coriander seeds, which add a really nice floral element. While the pickles may seem like an afterthought (and in many ways, thy were), they really completed the meal. Don't skip them!
5 from 2 votes
Print Pin SaveSaved!
Prep Time: 20 minutes
Cook Time: 1 hour
Total Time: 1 hour 20 minutes
Servings: 4
Author: Lauren Keating
Prevent your screen from going dark