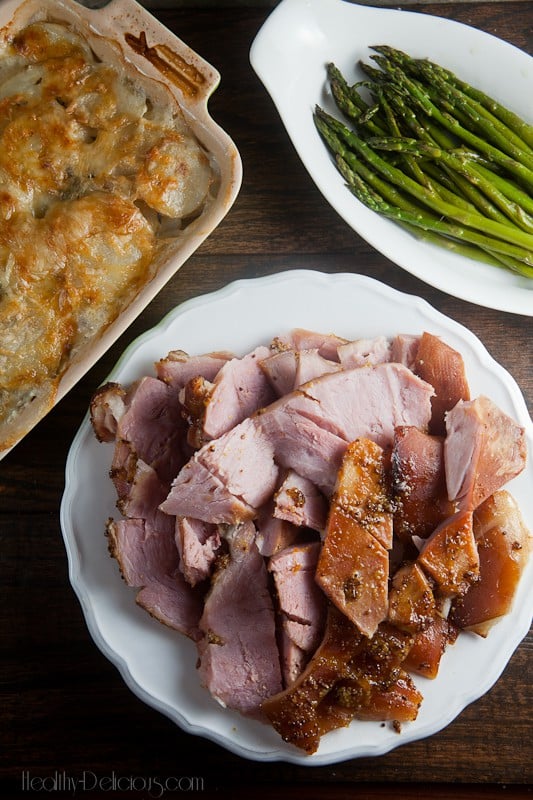 This week, the theme for Sunday Supper is “low and slow” and it couldn’t have come at a more perfect time. As tempted as I was to pull out my smoker and show you how to make my absolute favorite smoked jerk chicken thighs, I’ve had a giant ham taking up valuable real estate in my fridge for far too long. I was pushing up against the expiration date – it was time to cook that bad boy.

Here’s the thing: I don’t really like ham. I eat it at Easter, but only after drowning it in syrupy raisin sauce. I only had this one because Shop Rite gave it to me for free after spending so much money on groceries leading up to Easter.

I browsed around for recipes, ultimately settling on this one for Apricot-Mustard Glazed Ham from Martha Stewart. The flavors were simple and straightforward, which I figured would be helpful as I tried to use the leftovers, since they wouldn’t be as limiting as taking a bolder approach might have been. In the end, it was pretty good! I served it with homemade scalloped potatoes and roast asparagus and, while it wasn’t my favorite meal of all time, it was definitely enjoyable.

But the best part of making a baked ham? Using the leftovers to make Cuban sandwiches the next day.  (Leftover ham, sliced thin, and piled high with Swiss cheese and pickles and grilled to perfection. Do it! And then use the ham bone to make pea soup!) 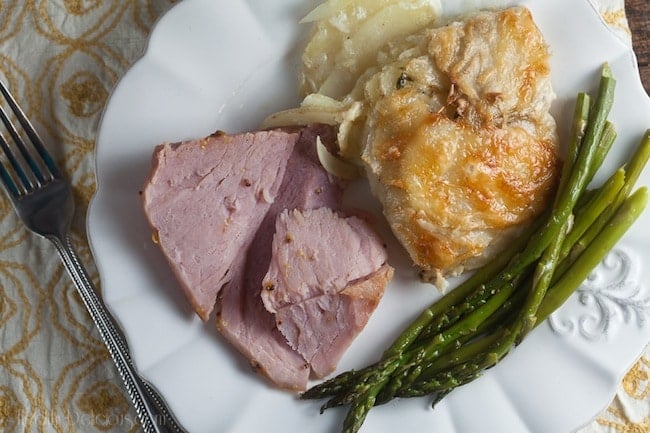 This recipe makes a ton of ham, so invite some friends over and prepare for leftovers. If you have a smaller ham, adjust the cooking time to a total of 10-15 minutes per pound, with the final 30 minutes at a higher heat.
No ratings yet
Print Pin Rate
Cook Time: 2 hours 30 minutes
Total Time: 2 hours 30 minutes
Servings: 24
Calories: 335kcal
Author: Lauren Keating (Healthy-Delicious.com)
Prevent your screen from going dark