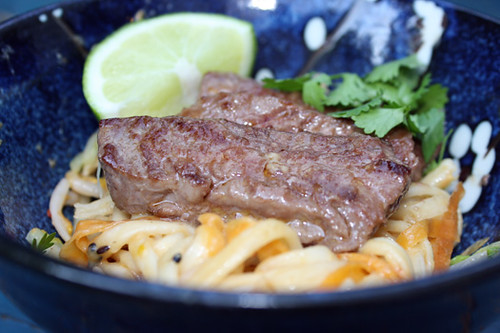 I made this dish up as I went along, and until the second it was plated and ready to go, I wasn’t exactly sure what I was making. When I planned my menu for the week, I thought that this was going to be a chilled salad, but when it came time to eat them, I really wanted something warm and comforting.

I really like the Japanese pan noodles at Noodles and Company, so I used those as a general guideline. As I was poking through the cabinets looking for ingredients to use, I saw a jar of crunchy Barney Butter, an all-natural almond butter that is very tasty and so much fun to cook with. I decided to use a little bit of that in my sauce, which gave it a little bit of a pad thai flavor. The pieces of almond also added a nice crunch.

The flavors in this dish were really light and summery, but the warmth and the sweetness from the almond butter made it nice for the chilly weather that we were having. I find that the weather really affects what I want to eat – if it’s cool out, I don’t like to eat salads! I want something that will stick with me. This dish definitely did the trick. 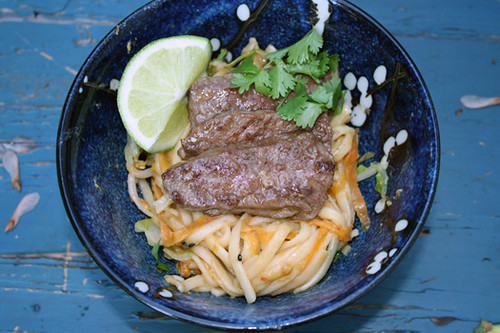 Bring a large pot of water to a boil and cook noodles according to package directions.

Toss steak in cornstarch. Heat oil in a large skillet over medium-high and fry beef until cooked through. Set aside.

In a small bowl, combine next eight ingredients (teriyaki through red peppers). Mix well and set aside.

Return skillet to heat. Add garlic and ginger and cook until golden. Add drained noodles, carrot, cabbage,and sprouts. Cook until carrot softens and cabbage wilts. Add dressing and mix well to distribute. Stir in sesame seeds and half the cilantro.

To serve, arrange noodles in a dish and top with steak. Garnish with cilantro and lime slices.

16 thoughts on “Udon Noodles with Sweet and Spicy Sauce”