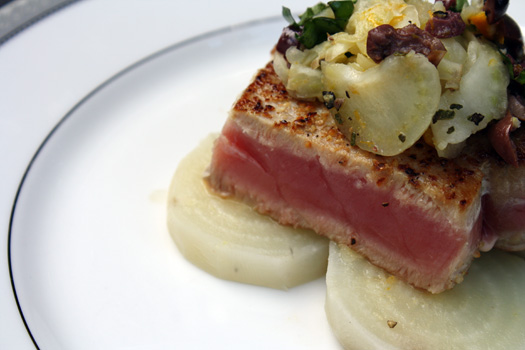 I’ve fallen in love with the Schenectady Greenmarket – the other markets in the area are great too, but Schenectady has the craziest vegetables! Like the dandelion greens that I posted about last week and these gorgeous white beets. They taste exactly the same as purple beets but because there’s no pigment they don’t make a mess and stain everything in the kitchen.

It took me a while to decide what I wanted to do with these beauties. Since they were so pale, I knew I wanted some color on the plate, but I didn’t want them to be overshadowed either. I finally settled on the idea of using tuna. I usually pair tuna with Asian flavors, but I didn’t think that would go with the beets and I had some leftover fennel in the fridge, so I decided to use a Mediterranean flavor profile. This came out fantastically – Shawn loved it and said that it was my best original creation yet.

I made an orange vinaigrette to go with the fennel salad and the beets and used orange zest on the tuna to pull all of the componants of the dish together. The leftover dressing was also great mixed into the orzo that I served as a side dish!

Tuna with Beets and Fennel Salad

Bring a large pot of water to a boil. Add beets and lemon juice and cook until beets are soft – about 25 minutes. Drain beets, and cut into thick rounds.

To make dressing: Combine orange juice, vinegar, mustard and honey in a small bowl. Mix well with a wire whisk or an immersion blender until mixture becomes emulsified and smooth. Set aside.

To make fennel salad: Set a medium skillet over medium heat. Add fennel and cook until it begins to softens- about 5 minutes. Remove from heat. Combine fennel with about 1 Tbs vinaigrette, olives, basil, and oregano. Season to taste with salt and pepper.

Combine a pinch of salt, pepper, cumin, and orange zest. Rub this mixture into the tuna. Heat oil in a pan over high heat. Add tuna and sear – about 3 minutes on each side. Remove tuna from heat to prevent additional cooking, and slice into two portions.

To plate: Arrange beet slices on a plate. Drizzle with a little of the vinaigrette. Top with a portion of the tuna. Arrange fennel salad on top of the tuna.

8 thoughts on “Tuna with Beets and Fennel Salad”