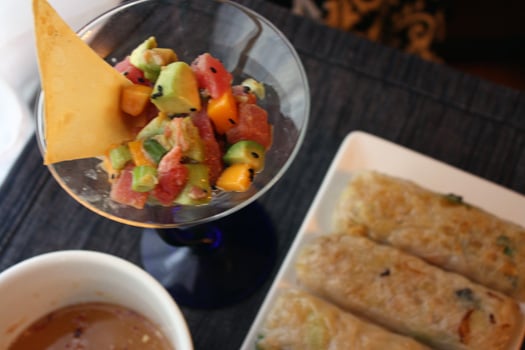 I always say that I love to cook, but sometimes I wonder how true that is I might just like to eat good food that I know I won’t get on a regular basis unless I cook it myself. Especially lately, I just haven’t been in the mood to spend any amount of time in the kitchen. It might be because of the heat, or because I’ve been sick, or because the new dog refuses to let me sleep in the morning so I’ve been tired… but I’ve had no interest in spending any amount of time in the kitchen. Since this meal required very little of me other than chopping some ingredients, it was perfect. And it tasted great. 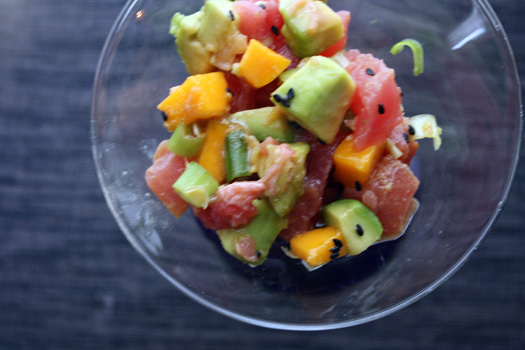 The tuna tartare is based on one from the most recent issue of Clean Eating. It was the picture that initially caught my eye, but I also really liked the idea of combining the tuna with avocado and mango – it seemed perfect for this time of year.

I really liked how the tartare turned out – the sweetness of the mango was really nice with the tuna. Lime, ginger, and wasabi provided a punch of flavor that kept it from being too muddy and bland. A crispy cracker provides textural interest and serves as a utensil. The magazine recommended baking wonton wrappers, but I really didn’t care for the way that those turned out. I think something like Kashi 7 Grain Crackers or whole grain tortilla chips would be much better. would be If you’re wary of raw tuna, I think this would work well with cooked tuna too, although I would still keep it on the rare side. 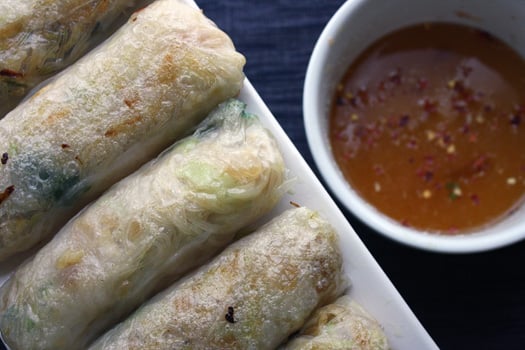 I served the tartare with some vegetable spring rolls that are based on a recipe that I’ve used before. The spring rolls are very simple, and rely mainly on some wilted cole slaw mix and fresh herbs. If you want, you can also add some steamed shrimp to them. The real flavor with these comes from the sauce – this time, I enhanced the sauce that I usually make with some plum sauce and red pepper flakes, which added a nice depth to the flavor. 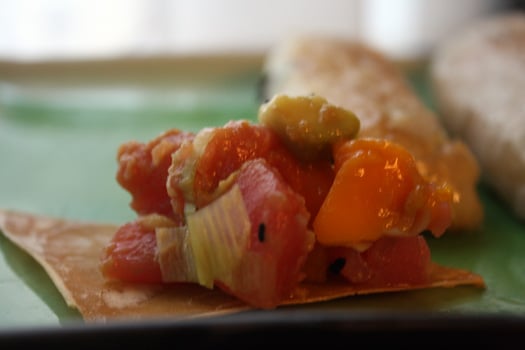 Fill a large bowl with warm water. Add noodles and set aside to soak and soften.

Drain the noodles. Cut them into 2-inch sections. Add noodles and sesame oil, and herbs to the vegetable mixture.

To assemble, soak wrappers in warm water until pliable, about 15 seconds. Spoon filling onto them and roll, folding ends in. Serve with dipping sauce.