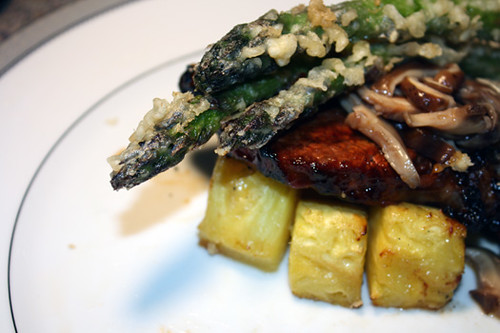 I’m so excited to see that the local farmer’s markets are starting to get more produce! I’m tired of seeing the same old apples, potatoes, and greens. Boring… When I saw some beautiful asparagus and strawberries this past week, I felt like I hit the jackpot! 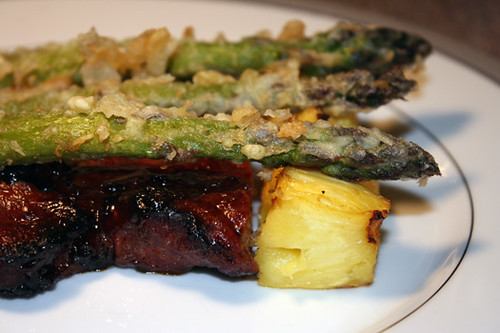 I don’t deep fry food very often, but I really wanted to try something different with the asparagus, so I went with tempura. The batter was surprisingly easy to make and didn’t include any fancy ingredients. I was a little worried because they seemed a little soft coming out of the pot, but one I let them cool on some paper towels for a few minutes the tempura crisped up very nicely. 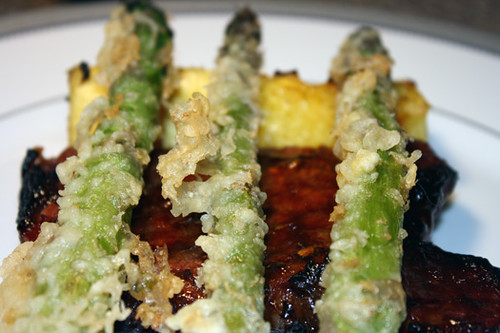 While I wouldn’t go as far as saying these are healthy, but they didn’t soak up very much oil and, in moderation, they can become part of a healthy, well-rounded meal. I’ve been looking for an excuse to make my Asian-glazed steak again, and the tempura asparagus went perfectly with it. I opted to skip a heavier carb like potatoes and instead served this with grilled pineapple and shitakes that were simmer in a little beef broth. 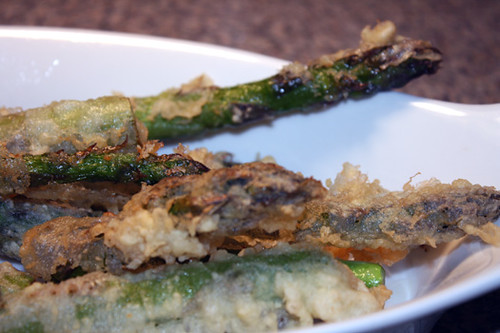 In a large dish, combine flour, egg, and water to form a thin batter.

Dip the asparagus into the batter, coating it well. Add asparagus to oil in batched, being careful not to crowd the pot. Cook about 3 minutes, or until batter begins to turn golden. Remove asparagus from oil and allow to drain on a paper towl lines plate for several minutes.

*I used about 1/2 cup of oil, which was about 1 inch deep in the bottom of my pot. It probably could have used to be a little deeper (maybe 1.5 inches) but I ran out of oil.