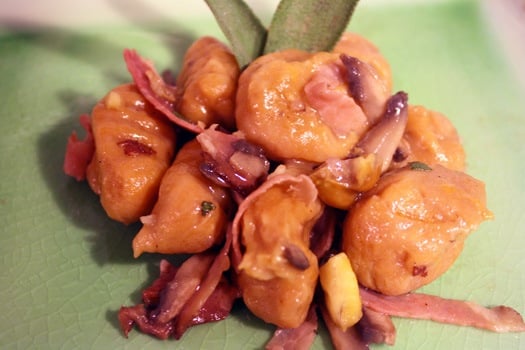 I’ve wanted to try making my own gnocchi for a while now, but until now I hadn’t gotten around to doing it. I don’t know what took me so long! It really isn’t as time-consuming or tedious as I thought it would be and the resulting dumplings were soft, pillowy bites of deliciousness. I decided to make pumpkin gnocchi a few weeks ago but I was originally going to pair it with a béchamel sauce. I wasn’t’ really feeling it – it just seemed so heavy – so I kept putting it off. I never feel like cooking things that I don’t want to eat! Anyway, I saw that they had fresh, local chestnuts at the co-op and I wanted an excuse to buy them. I thought they would pair nicely with the pumpkin, and I decided that some mushrooms cooked in brown butter would lighten the plate a little as well as add another layer of flavor. While I was preparing the gnocchi, I remembered that I had some leftover prosciutto so I decided to throw that in too. The resulting dish was an amazing display of rich fall flavors that was extremely rich, without feeling too heavy. [….]