If I don’t cut it out with the pumpkin and sweet potato soon, I’m going to turn orange! I have them on the menu three times this week – THREE! – But I can’t help it that they’re so delicious or that to me they are the ultimate fall treat. I think that sweet potatoes and yams often take the backseat to pumpkins this time of year, but I like to mix it up. I have trouble dealign with whole pumpkins (they’re so hard to cut!), so for the most part I use sweet potato any time I’m looking for something other than a puree. These sweet potato latkes feature  a lot of flavors that also go well with pumpkin (like sage and cream), but they have a crispy texture that you wouldn’t be able to achieve with a pumpkin. 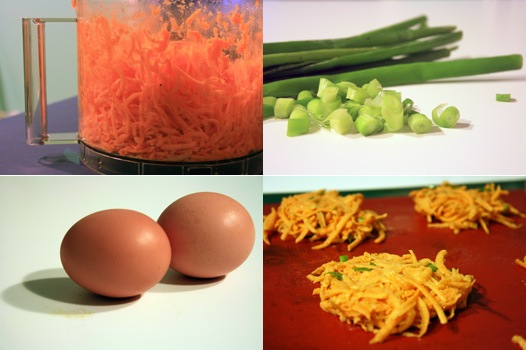 Most recipes for potato pancakes and latkes call for frying the patties, but I’ve discovered that you can get the same crispy outside and soft center by baking them. This allows you to cut down significantly on the fat. The lack of grease also lets the flavors of the ingredients really shine through. And since you can cook a bunch at once, you don’t need to spend nearly as long standing over the stove. That makes for a winning recipe, in my book! 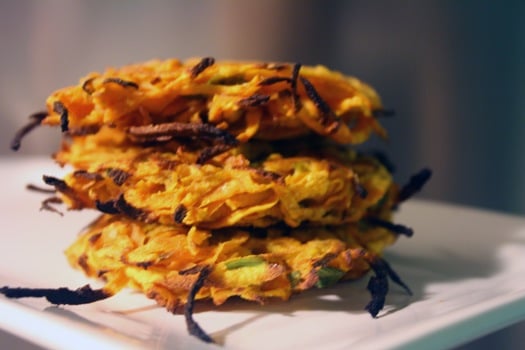 I served these on the side of some filet mignon with spiced-whisky sauce (the same recipe as here without the honey and thickened with a little bit of arrowroot and a splash of milk). I really liked the way this went together – the warms of the sauce and the warm flavor of the latkes contrasted nicely with the cool sage cream. These latkes would be great as a side to just about any fall dish though, and I even think they would make a nice meal on their own, served along with some black beans.
Look who wanted to join us for dinner! He didn’t get any – I snapped the pic and then shooed him away. 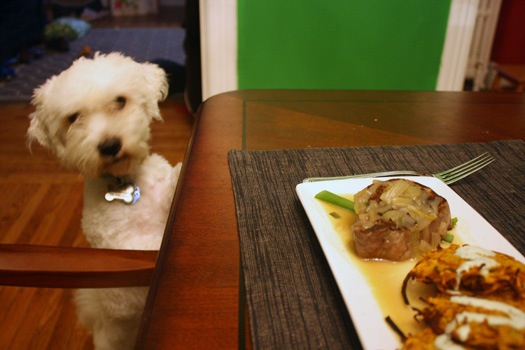 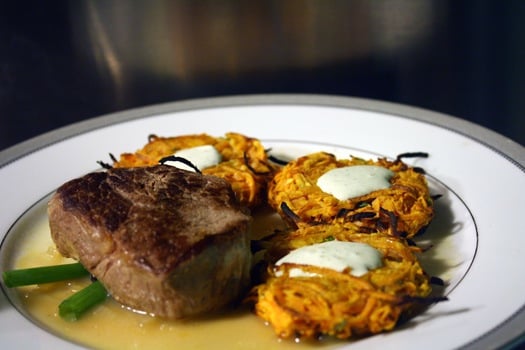 Combine sweet potato, scallions, flour, eggs, 2 chopped sage leaves and s+p. Use your hands to form the mixture into patties 2-inches in diameter – they will be pretty loose at this stage, but will hold together better once they are baked. Arrange on a baking sheets that had been sprayed with cooking spray or lined with a silicon baking sheet. Spritz tops with cooking spray.

Bake for 15 minutes, or until the bottoms are browned. Flip and cook an additional 5 minutes.

Meanwhile, combine sour cream and remaining sage in a blender or food processor. Blend until smooth. Season with salt and pepper.