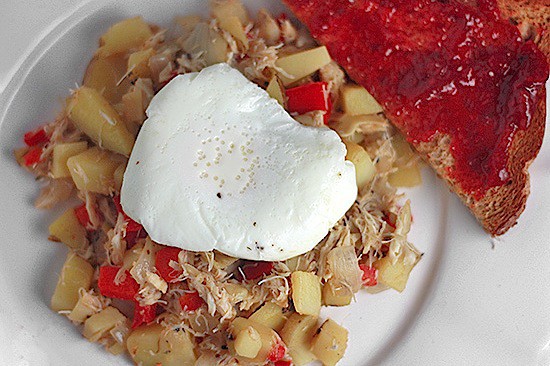 Last winter, Restaurants & Institutions Magazine published an article outlining their predictions for the major food trends of 2010. One of their predictions was that eggs would be the new bacon. I thought they were crazy. Who would ever pass up bacon — especially if only to replace it with an egg? Pure silliness.

I should have given them more credit. It pains me to say it, but I’m a bit baconed out. And I’m finding eggs — poached, fried, or baked with their quivering yolks — completely irresistible. Which might explain why as I was thumbing through Michael Symon’s cookbook the other day the crab tater tots caught my eye. I thought they would go beautifully with a softly poached egg. 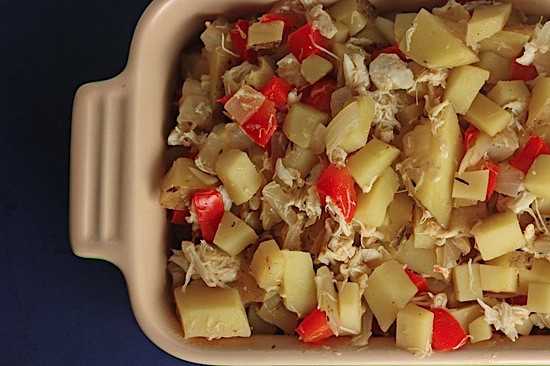 I bought all of the ingredients but as the week wore on, I thought about it more and more and the dish became more about the eggs than the tots. Plus, they seemed like more work than I wanted to invest in them: boil the potatoes, mash the potatoes, fry the tots. So the dish evolved. I used many of the same ingredients and emerge from the kitchen with the recipe reinvented as a quick and easy crab hash. That took a quarter of the time to make and is healthier since its not fried. And that was delicious topped with a poached egg. 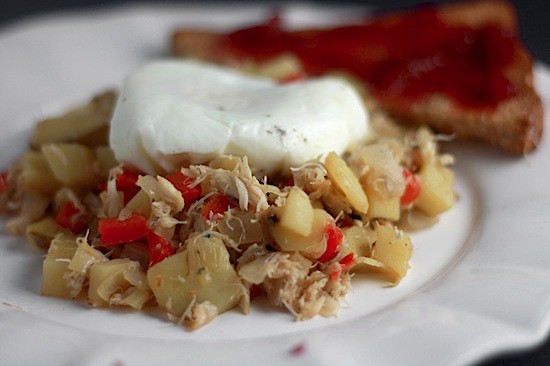 Crab Hash with a Poached Egg
This crab hash is delicately spicy, with sweetness from the crab and red peppers. It’s lovely topped with an egg that has a slightly runny yolk that mixes into the dish. Don’t be tempted to skimp on the crab — you want to use fairly large pieces of good-quality crab. I used Crown Prince White Lump Crab Meat, but if you have the luxury of having access to fresh crab, it would be even better. Don’t be afraid of seasoning this dish. The crab is delicate, but it holds its own very well when combined with the other ingredients.

Heat the olive oil in a large saute pan over medium heat. Add the onion and cook until translucent. Add the bell pepper, potatoes, cayenne, and Old Bay.Cook for 5 minutes, or until the edges of the potato begin to crisp up. Add the chicken broth. Simmer until the broth cooks off and the potatoes are soft. Stir in the crab and cook for an additional 1-2 minutes to heat through. Adjust seasonings to taste. Top with poached eggs.

I apologize if anyone had trouble accessing the site earlier this week. I ran into some technical difficulties while moving the blog to a new, faster host. I gave the blog a little bit of a facelift as well! Things will continue to be tweaked over the next few days, but there shouldn’t be any major problems (knock on wood!) and hopefully you’ll notice that things are much faster to load. If you do tun into problem or notice anything out of whack (broken links, pages not loading correctly, etc) please email me to let me know! Thanks! 🙂 PS- If you’re looking for the comments, they’re at the bottom of the post now.