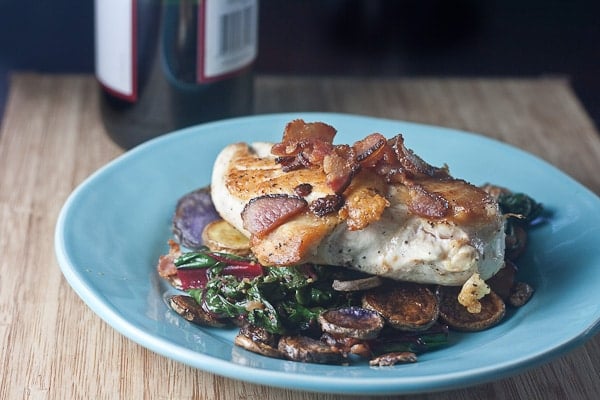 This post is going to be short and sweet. I’m actually typing it in the car while we drive to DC for a wedding and it’s kind of hard to see the screen with the sun in my face! (That’s what I get for leaving this month’s Secret Recipe Club post until the last minute… again.)

This month, I was assigned to cook something from K&K Test Kitchen. The blog is the joint effort of 20-something Kelsey and her mother, Kim. Such a fun idea, right?! I love it. They have a lot of really great, easy to make recipes – and a series devoted to making 5 meals with less than $50! I picked this recipe for chicken with potatoes, bacon, and chard because it’s light and clean (did I mention that I’m in the wedding that I’m headed to? And that my dress takes uh… a little bit of a struggle to zip? Whoops!) but they also have a recipe for apricot scones that’s totally caling my name. I’ll be making those next week, for sure.

Anyway, this recipe was great and, as promised, super quick and easy. I adjusted it a little to eliminate the use of one pan (I hate doing dishes) so my version take a few minutes longer, but it’s still on the table in under 30 minutes. 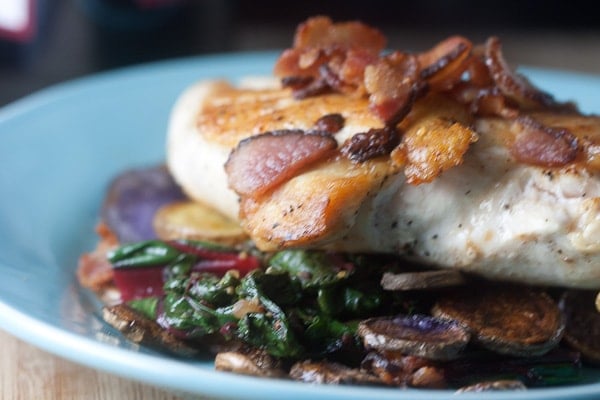 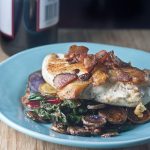