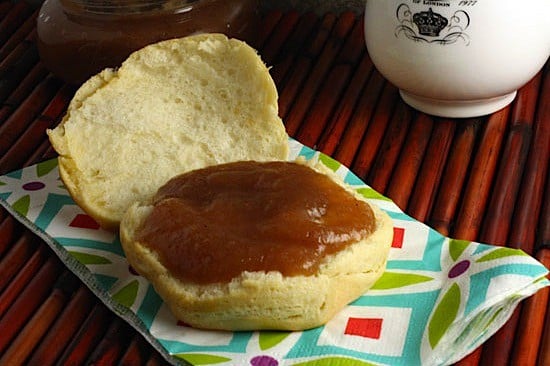 Yesterday, Shawn and I met up with some of our local blogger friends for brunch and apple picking at Indian Ladder Farms in Altamont. It was a beautiful day and we had a ton of fun, but I didn’t really like the way the farm was set up. Unlike other pick-your-own places I’ve been to where you weigh your apples and pay as you exit, Indian Ladder charges you for a bag as you go in — you can fill it as much or as little as you want, but either way it costs $14. I had only planned on buying 4-5 pounds of apples, but since I had to pay for them anyway I filled my bag almost to the top (I was really more interested in taking pictures than picking apples). 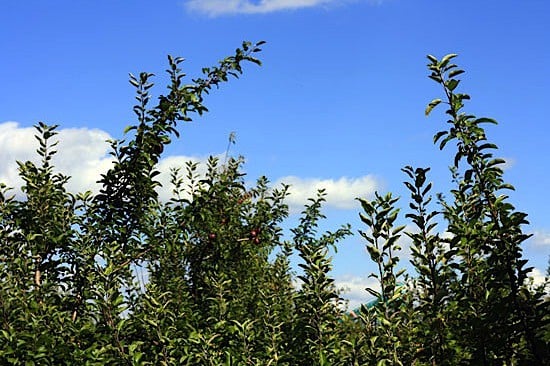 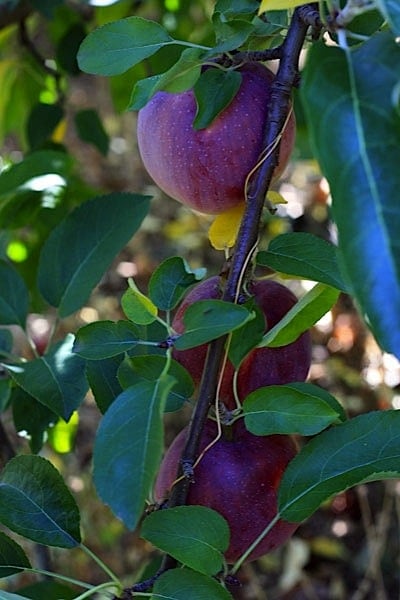 Despite leaving some room in my bag, I ended up bringing home 17 pounds of apples! Since I knew I would never be able to eat that many apples before they went bad, I immediately made a big batch of apple butter, which is one of my favorite fall foods. If you’ve never had it, apple butter is a thick spread that’s made almost entirely of apples — it’s essentially applesauce that’s reduced down until it becomes spreadable (there’s no actual butter involved). The sugars in the apples caramelize and, when it’s seasoned with warm spices like cinnamon and ginger, it’s one of the most delicious things ever! Enjoy it on toast or biscuits, mixed into yogurt or oatmeal, or over vanilla ice cream. It also makes a great compliment to a cheese plate (it pairs especially well with sharp cheddar).

I use a lot less sugar in my recipe than others that I’ve seen because I don’t like it to be super sweet (some recipes use more than double the sugar I do!). Because of the reduced sugar, the apple butter shouldn’t be canned — it will keep for a while in the fridge though and it also freezes very well. 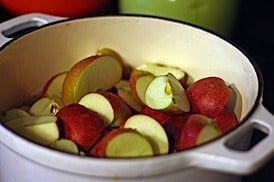 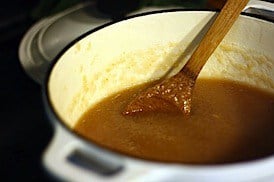 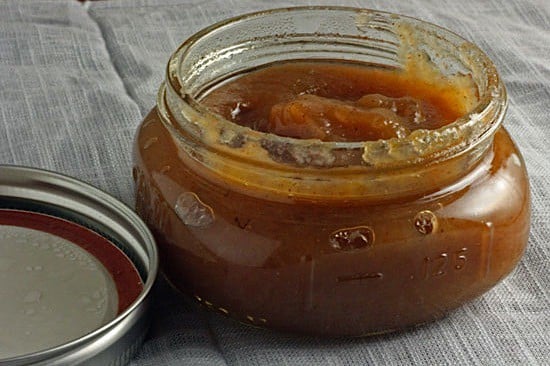 Spiced Apple Butter
There’s no quick way to make apple butter, but the results are worth the wait. I have outlined two methods below — one is a lot faster than the other, but will require you to stand and stir it for about an hour. The slower method doesn’t require constant stirring, but it takes a few hours to reduce. If I’m going to be home, I like to use the slow method because it had the added benefit of making my whole house smell amazing!

Combine the apples, vinegar, cider, and water in a large stock pot (I use a 5 quart dutch oven). Bring to a boil. Cover and cook for 40 minutes, or until the apples are very soft.

Place a mesh sieve over a large bowl. Ladle the cooked apples into the sieve. Press down on them with a spoon to force the apple through to the bowl below, leaving the seeds and peel behind (you’ll end up with around 4.5 cups of apple puree and a half cup of seeds/peel). Discard the seeds and peel, and return the apple puree to the pot. Stir in the sugar and the remaining spics.

“Fast” Method: Cook over medium high heat, stirring constantly (to prevent burning), until the apple butter is reduced to about 3 cups and is very thick — a line drawn across the bottom of the pot with the spoon should take a few seconds to go away.

until the apple butter is reduced to about 3 cups and is very thick — a line drawn across the bottom of the pot with the spoon should take a few seconds to go away.