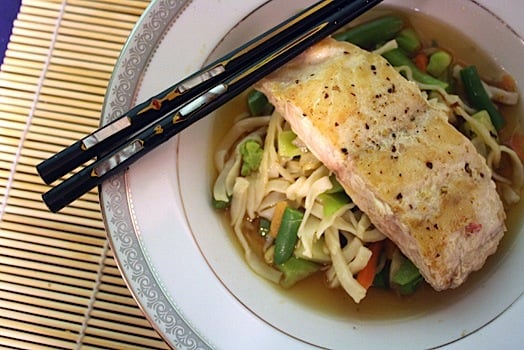 Lately it seems like everything I’ve been eating is so heavy: cheese here, cookies there, puff pastry galore … and don’t even get me started on the fried stuff. I may have to start a second blog called “Fatty McFatterson Fries Things” to document those. 😉 After all of those heavy, greasy (and oh so tasty) meals, this snapper was like a breath of fresh air. The flavors were so bright and even though there was something that seemed almost summery about this dish, it didn’t seem out of season at all. There’s something inherently comforting about ginger and noodles that makes this dish perfect for the chilly weather. 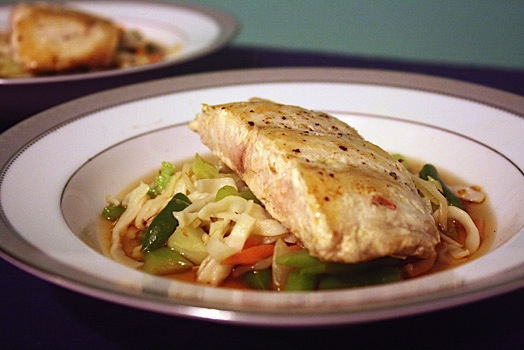 I have to confess – I used frozen vegetables in this. I don’t know why, and I really don’t have a good excuse for it. Rookie mistake. The mix I used contained green beans, carrots, peppers, bean sprouts, and onions. While none of these vegetables are necessarily in season right now, they are widely available, and I’m sure they would have tasted a lot better than this mix which just had NO FLAVOR. Apparently eating fresh vegetables has me spoiled, but I also think I finally figured out why I hated vegetables a a kid. These didn’t taste bad, but they were boring and you really couldn’t distinguish one from the other, flavor-wise. In a pinch, I guess there’s ok but this would be so much better with fresh vegetables. As it is, it took me about 15 minutes to make this dish. Peeling a few carrots and blanching some beans would have added an extra 5 minutes or so? Totally worth it.

But its ok, because this dish isn’t about the vegetables. It’s all about the broth. Which makes sense, since I actually built this from the broth up. I really felt like a warm, gingery broth and I had some ponzu left from making Brussels sprouts so I set off from there. Fish seemed like a good idea, and vegetables. Up until the last minute I was planning to make rice but then I switched to noodles which was an awesome idea because is there anything better than slurping up delicious broth-y noodles? But yea, the broth… on their own each component of this dish tasted ok, but when the broth was added the flavors all popped and the dish really came together. I’ll be honest – snapper isn’t my favorite. I think it has a tendency to taste really strong and fishy. But in that broth? Perfection. 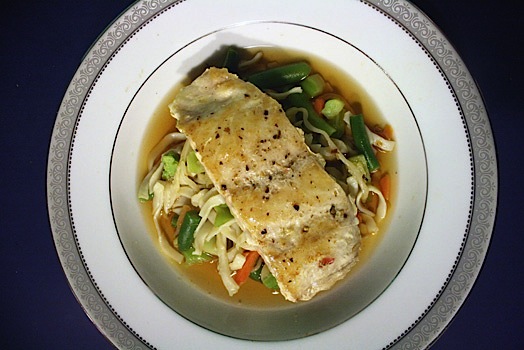 Bring the water to a boil. Remove from heat and add the tea bad. Set aside and allow to steep.

In a second pot, combine the rice vinegar, sake, sugar and ginger. Bring to a boil, then lower heat and allow to reduce by half. Stir in the tea and keep warm.

Season snapper with salt and pepper. Heat the oil in a large skillet. Add the snapper, skin side up. Cook 3 minutes on that side, then flip and cook 1-2 minutes on the skin side. Remove to a plate. Tent with foil to keep warm.

Add the vegetables to the pan. Stir fry briefly – just enough to fully defrost the vegetables. Add the noodles and stir fry for 2-3 minutes or until everything i heated through.

Mix the ponzu and fish sauce into the sauce. To serve, arrange noodles and vegetables in each dish. Top with a snapper filet. Spoon on the sauce.

* I recommend using fresh vegetables instead – shredded carrot, blanched green beans, bean sprouts, onions, and some shitakes would be great.

8 thoughts on “Snapper in Ginger-Citrus Broth with Asian Vegetables”