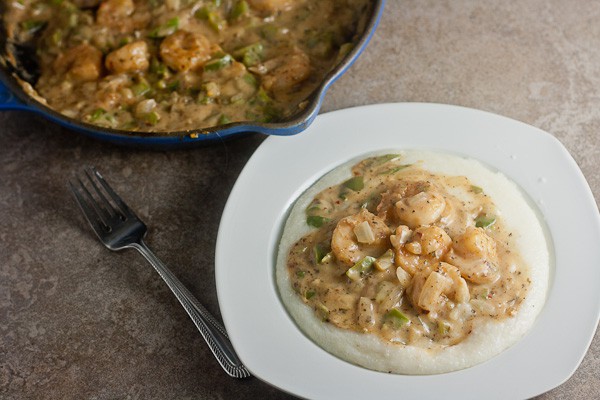 One afternoon last month, Shawn called on his way home from work and asked if he should pick up something to make for dinner – he knew that I didn’t have anything planned. I told him that I’d cook, but I really didn’t have any ideas. I asked him to just grab whatever looked good and I’d figure out something to make. When I finally got home, I found that he had purchased a pound of shrimp, a block of Monterey Jack, and a carton of grits. I guess he knew what he wanted!

I’d never made shrimp and grits before (and had only ever eaten it once!) so I consulted a few friends on twitter for guidance. I added a pepper that I had in the the fridge and, taking a cue from the menu at New World, made a spicy Creole cream sauce to blanket everything with. The resulting dish might not be traditional, but it definitely hit the spot.

Sometimes I come up with ridiculously complicated recipes with ingredient lists a mile long. I know, it’s incredibly annoying. Other times, I get into the mood for simple food. As long as you use good, quality ingredients, you really don’t need to use a million spices and seasonings to make things taste good. Lately, I’ve been in a simple kind of mood.

I’m taking a class about food blogging right now, and this afternoon I listened to an interview with Molly from Orangette. She commented that as she became more interested in food and cooking, she became less and less interested in fancy ingredients and food trends and focused more on the simple joy of eating something like cheese and crackers. That comment really made me pause and think about my own cooking. Back in the day if you asked your mother or grandmother for a copy of a favorite recipe, you’d get it written on an index card. It might have taken up both sides, but it probably wouldn’t compare to today’s recipes, which could easily fill an entire printed page. 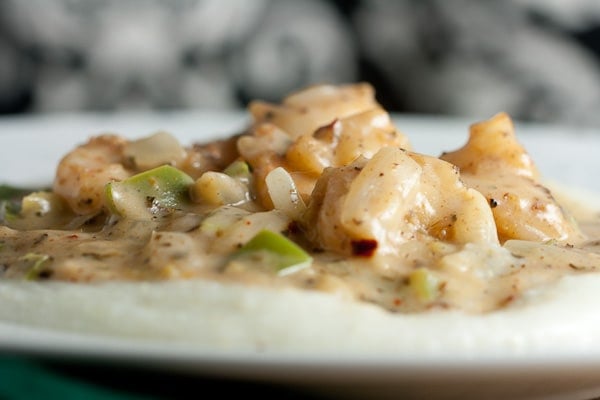 Last night, I made a roast chicken that was so good that I almost cried. It was a simple dinner, but I used great ingredients and solid technique and that really showed in the final product.

I was nervous when I made these shrimp and grits a few weeks ago – it didn’t seem like I was putting enough in them, and I was worried that they’d be bland. In the end, I shouldn’t have worried. This isn’t a pretty dish and the ingredients and preparation are simple, but it has a ton of flavor and it was exactly the kind of comfort food that we were in the mood for. If your handwriting is small, you might even get the recipe to fit on an index card. 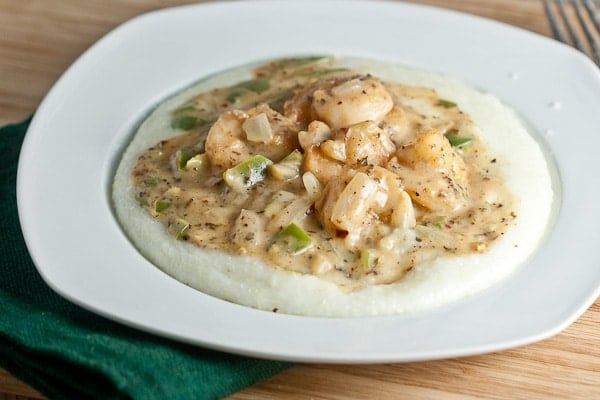