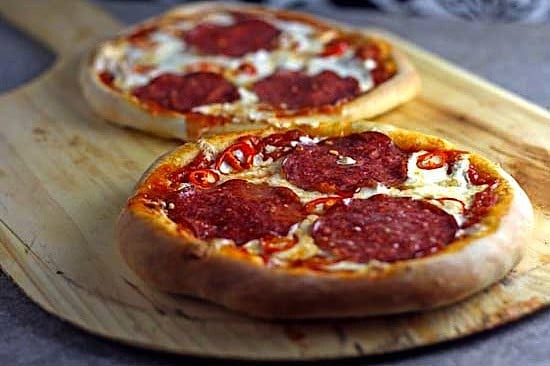 This past fall I rediscovered salami as a pizza topping and I’ve been hooked ever since. It crisps up delightfully around the edges and has a more complex and meaty flavor than pepperoni does. On these individual-sized pizzas, the salami is joined by spicy red chili peppers — you can leave them off if spicy food isn’t you thing, but I find that they add a delicious flavor and negate the need for crushed red peppers added afterward (I usually pile them on). What goes better with salami and cheese than beer? Hannaford sells lumps of beer-bread dough that are perfect to use as the crust for these pizzas (find them in the refrigerated section, near the hummus and fresh mozzarella). Of course, you can use any pizza dough that you like, or make your own beer bread dough from scratch.
.
Because I used a lot of purchased ingredients on these pizzas this post is really more an idea that a recipe, but I hope that it’s one that you’ll enjoy. I figured it would also be a great opportunity to share a few pizza-making tips that I’ve picked up over the years. 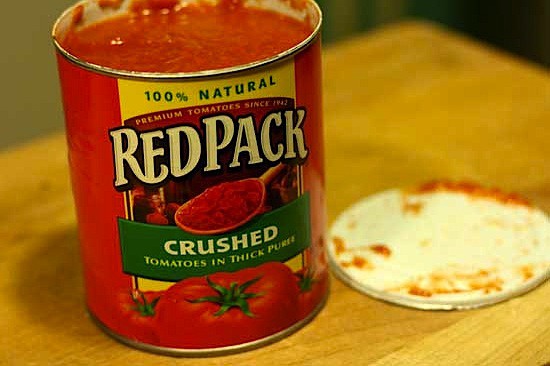 Pizza-Making Tips
1) Ditch the jarred sauce. I find most prepared sauced to be too thick, with a much too concentrated tomato flavor. Canned tomatoes have aren’t as overpowering, and have a sweeter flavor that tastes more like a fresh tomato. I usually puree a can of whole peeled plum tomatoes and reduce it on the stove with some Italian seasoning and healthy glug of red wine. Lately though, I’ve just been doctoring a can of crushed tomatoes with some oregano and using that. Red Pack has the perfect texture. (Disclosure: they sent me a few cans to review. I’ve since bought more.)
–
2) Fresh mozzarella, shredded. I love the way fresh mozzarella tastes on pizza, but at lot of places slice it . Since it doesn’t spread as it melts, this leaves big, cheese-less gaps. Shredding the mozzarella will help you cover the entire pizza — overall, you’ll be able to use less cheese, but your pizza will seem cheesier. Throw the mozzarella in the freezer for 15 minutes to firm it up and it will be much easier to shred. The recipe below calls for 6 ounces, but I tend to not use it all.
–
3) Size matters. I know I’ve written about this before, but I prefer to make individual sized pizzas instead of one larger pizza. I have no problem polishing off half of a full-sized pizza. But when I make four individual pizzas, I find that one is enough. And if it isn’t, I’m much more likely to take more salad than I am to grab a second pizza. For me, individual pizzas are crucial for keeping my portions in check. Plus, what’s more fun than your very own pizza?
–

Place dough in a greased bowl and cover with a towel. Allow to rest at room temperature for 1 hour.

Preheat oven to 400. Divide dough into 4 pieces. Gently work each piece of dough into a round, flat disk, approximately 6-inches in diameter. Mix together the crushed tomatoes and oregano and spread onto each piece of dough, leaving a half-inch border around the edge. Divide the cheese among the pizzas and sprinkle with the red peppers. Top with salami.

Bake at 400 for 15 minutes, or until cheese is melted, salami is crisp and crust is cooked through.