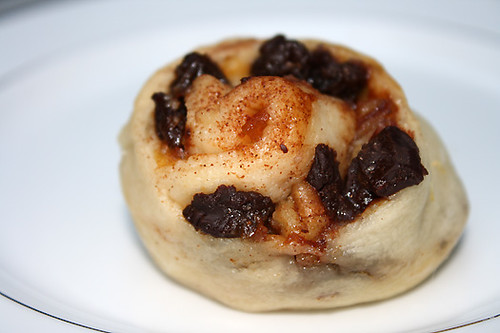 Deb over at Smitten Kitchen is a genius when it comes to desserts. I blogged about her rice pudding not too long ago, and when I saw the recipe I knew right away that i would have to try it to.

When I was a little kid, one of my uncles would always bring rugelach to Christmas. I never knew what it was or what it was called but I loved it. It had been years since I had it, and I had honestly forgotten about it. But then this Christmas, my grandma gave me a big thing of it as a gift. It lasted about 2 days. Not one of my proudest moments.

This recipe iis sort of a cross between a cinnamon bun and rugelach. I followed Deb’s recipe fairly  closely, but I lightened up the fillings considerably in an effort to keep it healthy enough to call it breakfast. I also left off the icing- although it sounded wonderful, I didn’t think they really needed it and it would just add more calories. The rolls came out wonderfully- just sweet enough, with a great combination of apricot and chocolate with a hint of cinnamon. I wouldn’t eat these for breakfast every day, but once in a while they make a nice treat. I only made a half batch, but I think they would also freeze well wrapped individually.

note: I just realized that I totally forgot the baking soda and baking powder in this recipe. Ha! They came out fine (obviously) but you might want to add 1/2 tsp of each.

Mix the milk, vegetable oil and sugar in a large pot, and heat it until just before it boils. Turn off the heat, remove the pot from the burner, and let it cool for 45 minutes to one hour. When the mixture is lukewarm, sprinkle in the yeast and let it sit for a minute or two before adding the four cups of flour. Stir the mixture together, cover the pot and let it sit for at least an hour.

Generously flour a counter. Dump half the dough onto it, flour your rolling pin well, and roll the dough into a large rectangle about 24 inches wide and as thin as you get it in the other direction.

Spread one half of your jam evenly over the dough, leaving a 1/2-inch margin at the wider ends. Drizzle half the agave nectar over the dough, creating three lines running the length of the rectangle. Sprinkle with half your cinnamon, half the raisins, and half the chocolate.

Starting with the wider side of the rectangle begin to tightly roll the dough, incorporating the filling. Once it is fully rolled up, cut it into 12 segments with a sharp knife. Place one in each muffin cup. Sprinkle the tops of the rolls with a little more cinnamon and set the tin aside to puff some more, about 20 to 30 minutes.

Repeat this process with the other half of the dough, and the remaining filling ingredients.