Roasted carrot and ginger soup is a great way to spice up a rainy Spring night. This rich and creamy vegetarian soup may be low in fat, but it’s full of flavor! 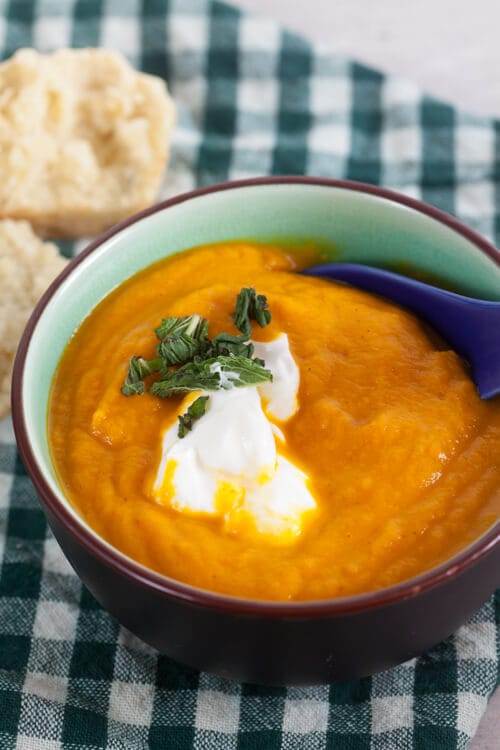 Remember when I told you back in January that I was starting culinary school? I haven’t mentioned it since, so I guess I owe you an update!

My class started in February and I was really excited about it, but I ended up getting off to a slow start. I went to Florida conference the week after class started and then Shawn and I both started new jobs in March. New routines and new schedules left me feeling pretty overwhelmed, so it was hard to find time to devote to the program. Things have really started to settle down in the past few weeks though, so I’ve had time to dig in. I spend a few hours on the class every Saturday morning, and it’s starting to be one of my favorite parts of the week. I’m still behind, but I’m starting to catch up to where I should be! (It’s online – the Plant-Based Professional Certification though Rouxbe – and I have until August to finish it up.)

The first few units have focused on the basic skills – knife skills, steaming and sauteing, etc. – but it looks like I get to start actually cooking things soon. Meanwhile, I’ve been learning a ton! Even though the first few lessons haven’t been super exciting, I can tell that my technique has improved and I have a better understanding of the science behind why things happen the way they do in the kitchen. I also picked up some fun new tricks, like steaming rice and grains to reheat them without drying them out.

The knife skills unit required me to slice what felt like a million pounds of carrots, so I used some of my work to make this roasted carrot ginger soup.

Roasting the carrots until they’re slightly charred, brings out their sweet flavor and adds a hint of smoke. While the carrots roasted, I simmered some vegetable broth with onions, celery, and fresh ginger. Adding the onion and celery gives the store bought broth a nice flavor boost, and the ginger offsets the sweetness of the carrots really nicely. Top the soup off with a dollop of coconut milk yogurt (I’m obsessed) and fresh mint and serve it alongside some cheddar biscuits or herbed buttermilk bread to complete your meal. 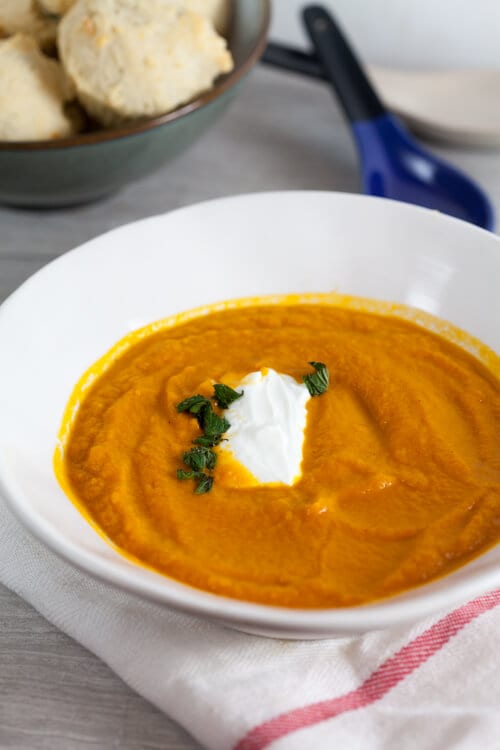