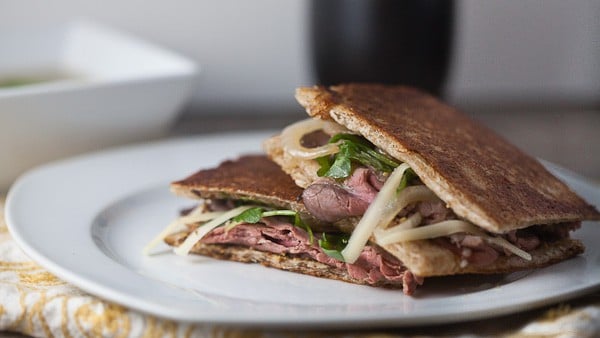 I’m only one post into Cookie Week but let’s take a quick break to talk about this sandwich, which was inspired by the flavors of French onion soup. Yup, that’s right: rare roast beef, soft, caramelized onions, and gooey gruyere cheese all tucked between two pieces of crisp bread. I could eat the panini every day of the week and be a happy camper; Shawn said it’s “even better than a burger.” Served on the side of some potato-leek soup, it was just about perfect.

When trying to come up with some unique ways to use Pillsbury Refrigerated Pizza Dough, I came up with the idea of using it as bread for sandwiches. There are only two of us in the house and we’re generally not big sandwich eaters, so I rarely by bread – we just don’t eat it fast enough and I don’t like the way it tastes after its been refrigerated or frozen.  It turns out that pizza dough – especially the artisan variety made with whole grains – was the perfect solution to my bread problem. It keeps in the refrigerator for a long time and bakes up quickly wen you need it, and one tube makes the perfect amount (and we each get a leftover sandwich for lunch the next day!)

I discovered that Pillsbury already has a few recipes on their site that uses the dough this way, so the idea wasn’t as creative as I thought it was, but it’s still a great tip and a method that I’ll be using again! 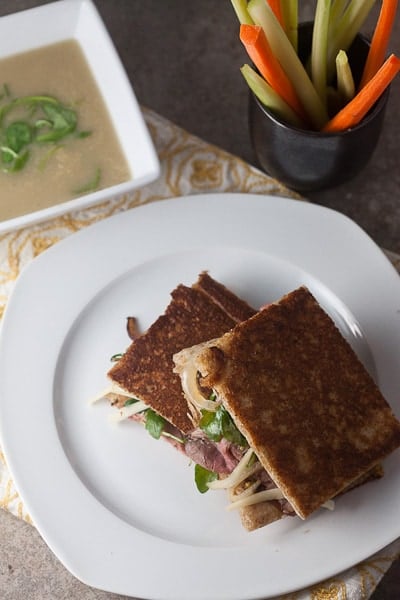 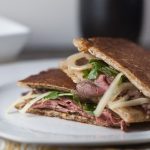 The roast beef will cook slightly as the sandwiches toast, so ask for the rarest roast beef that the deli has. Save time and help get dinner on the table quickly by caramelizing the onions while you wait for the oven to heat and the bread to bake.
No ratings yet
Print Pin Rate
Cook Time: 30 minutes
Total Time: 30 minutes
Servings: 4
Author: Lauren Keating
Prevent your screen from going dark

This post was sponsored by Pillsbury and I was compensated by General Mills/Pillsbury for my time creating this recipe. All opinions are my own.