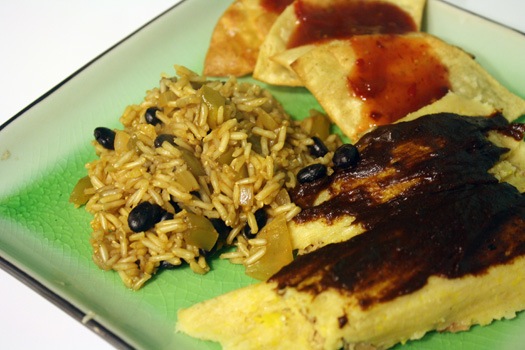 Remember that time I made enough pulled pork to feed an army? Without the extra sauce on top, the seasoning was mild enough so that it could be used in a variety of ways. I separated the leftovers and froze them in small bags so I could pull them out and have pre-cooked pork ready whenever I wanted to use it. One thing I was excited to make with it was tamales – pork tamales with mole sauce is one of my favorite dishes and I had a hunch that this pork would make a great filling. I was right – these were delicious! An with the filing already cooked, they were very easy to prepare. 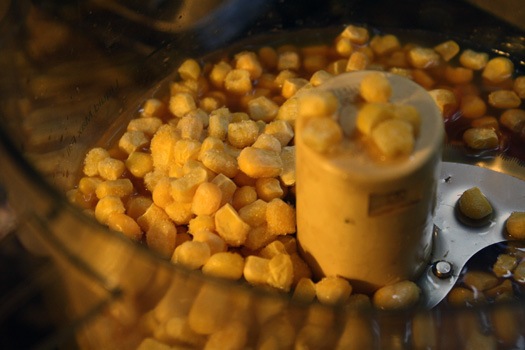 When I make tamales dough, I like to use corn in addition to dried masa. I blend it in the food processor until its a mostly smooth texture (I do like to leave a few small bits of corn). The corn adds a nice fresh flavor to the dough and also lets me cut down on the fat – this recipe uses only 1/4-cup of crisco, compared to about 1-1/2 cups in other recipes. You would never know that all of that fat is missing though just by tasting them! 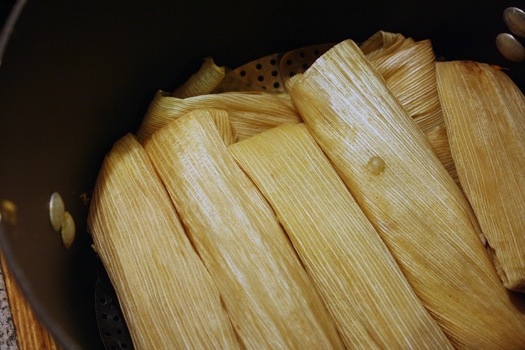 I usually bake my tamales, but for this recipe I steamed them – I just used a big stock pot with a vegetable steamer insert. If you do it like this, be careful not to stack your tamales into too many layers – 2 or 3 tops – or they won’t cook evenly. You also want to make sure to team them long enough or they will be slightly gummy. Because of the long time required for steaming (about an hour and a half) I’m marking this as a weekend recipe, but only about 15-20 minutes is spent actively cooking. If you don’t have a pot large enough to steam the tamales, or if you prefer baking them for some other reason, you can find instructions for that here.

I served these up as part of a little Mexican feast with homemade tortilla chips, salsa roja, rice and beans, mole sauce, and habanero hot sauce. One of these days I’ll be brave and attempt to make my own mole, but for now I stick with Goya. You can find it in the Mexican aisle of the grocery store, or near other Goya products. It’s a paste that you mix with water and heat. Simple, and pretty good!

I did make the habanero sauce myself, and it was amazing – super spicy! I’ll be posting the recipe for that soon. If you like things spicy, it’s a recipe you won’t want to miss! 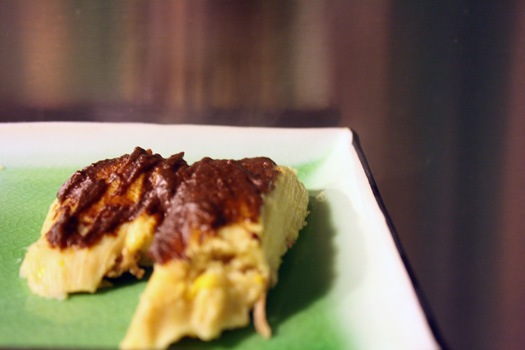 Combine stock, habanero, and corn in a food processor. Process until the mixture is mostly smooth, with a few larger pieces of corn remaining.

Combine dry ingredients in a large bowl. Cut in the crisco until the mixture looks crumbly/ mealy. Add the broth and corn mixture until a soft dough forms.

Soak corn husks in water for a few minutes until they soften.

Arrange two husks so they form a roughly rectangular shape. Shape 3 tablespoons dough in center of husk. Press to spread it into a rectangle that covers the top half of the husk. Spoon about 1-ounce of pork onto the dough, arranging it so that it is only on one side. . Roll the husk so that the dough encapsulates the pork (roll the husk the long way) then fold the empty part of the husk under (fold the short way). Repeat with remaining ingredients.

Bring a small amount of water to a boil in a stockpot with a steamer insert. Add the tamales to the pot in 2 or 3 layers. Cover and let steam for an hour and a half, replacing water as needed.