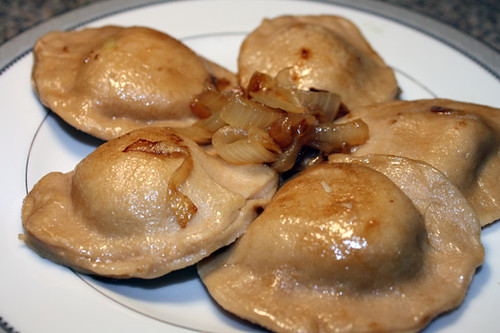 I still remember the first time I had pierogis. I was about 5 and I was with my grandparents at a Polish festival. It was noisy and crowded and I was basically miserable. Until it was time to eat! I couldn’t get enough of the potato filled dumplings and I kept making my grandmother get me more. I’ve loved them ever since. We ate them fairly often as I grew up, but they were usually Mrs. T’s – I only remember eating homemade pierogis a handful of times.

Ever since I started making homemade pasta, I’ve had it in my head that I wanted to try homemade pierogis. I finally did it, and I don’t know why I waited so long – They were really easy to make! I made the dough and the filling over the weekend and refrigerated them. All I had to do after work was roll out the dough, fill them, and boil. You can also freeze the uncooked pierogis after they’re filled and boil them straight from frozen.

I used a recipe from Clean Eating as the starting point for this dish. I liked that their dough didn’t use egg yolks and I loved the idea of combining the potato filling with cauliflower. I also used whole wheat flour in the dough. You could definitely tell they were wheat, but the flavor was still really nice and the pasta had a nice texture. To serve, I pan fried them with some caramelized onions until they turned golden brown and topped them with a teaspoon of melted butter. They’d also be good served with sour cream. 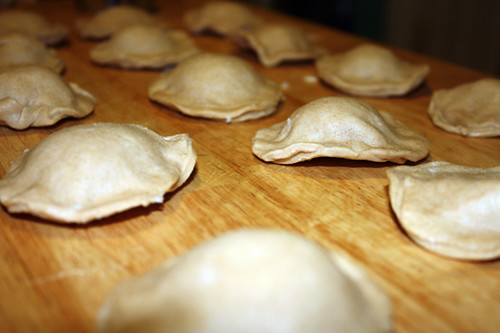 Bring a large pot of water to a boil. Add potato and cauliflower and boil until soft. Drain and mash. Stir in cheddar and some salt. Refrigerate until completely chilled.

Meanwhile, combine flour and salt in a large bowl. Combine sour cream and milk. Stir into flour, working it with your hands until it combines and forms a dough. Knead about 10 minutes or until it becomes smooth. Form into a disk, wrap in plastic wrap, and refrigerate for at least 30 minutes.

Divide dough into quarters. Working with one quarter at a time, roll to a 1/8″ thickness. Cut out circles with a 3″ round cookie cutter. Repeat with remaining dough. Spoon 1 tsp filling onto half the dough rounds, then top with a second round. Pinch the edges together to seal. Transfer pierogis to a large pot of boiling water. Boil for about 5 minutes, or until they float.

Heat oil in a large skillet. Add onions and cook, stirring occasionally, until they begin to caramelize. Add pierogis and cook for about 1 minute on each side until they become golden. Spoon melted butter over top.

14 thoughts on “Potato and Cheddar Pierogis”